It’s worth waiting for Five Shaolin Masters’ finale. Much of this kung-fu odyssey seems designed for the final 15-minutes, where the five referenced in the title separate to take down their foes, each using different techniques or weapons, and in varied locations. It’s choreographed bliss.

Beforehand, the script struggles in identifying characters, place, and purpose. Immediately, Five Shaolin Masters burns down a temple, leaving the five heroes homeless, this prior to even naming the men. They head out to fight those who wronged them, totalitarians it’s eventually learned, but even this is murky. The storytelling sinks Five Shaolin Masters, but at least the fights can entertain.

Five Shaolin Masters is in a rush to showcase the fights

The highlight is Sheng Fu, whose notable charisma and charm produce this film’s personality. Sheng Fu’s tragically short life cost the genre a clear star with obvious breakout potential, the latter seen here. He jokes with his opponents, shrugs off torture, and while arrogant, understands the need to better himself to overcome this rival regime. That’s nuance in a martial arts entry devoid of anything else.

When he’s on screen, Five Shaolin Masters is pure joy. Same goes for the brawls, all iconic in Shaw Brothers studio style, from the exaggerated slow motion deaths to gooey blood. Spectacular back-and-forth conflicts keep the energy up, and this movie doesn’t come with guarantees – heroes die too. That makes the lack of character definition worse; as bodies pile up, emotions don’t. Even among the main cast, the faces blur together, notable more for their choice of weapon than a personality.

There’s a mistake in starting midway through the first act. Never is the temple established, and therefore, neither are the people who cherish it. The same goes for those who burn it down. It’s as if Five Shaolin Masters is in a rush to showcase the fights, undoubtedly a means to keep the audience engaged. That risk doesn’t payoff, and instead weighs down the middle act where the drama tries to take precedence. At least it’s topped by spectacle. 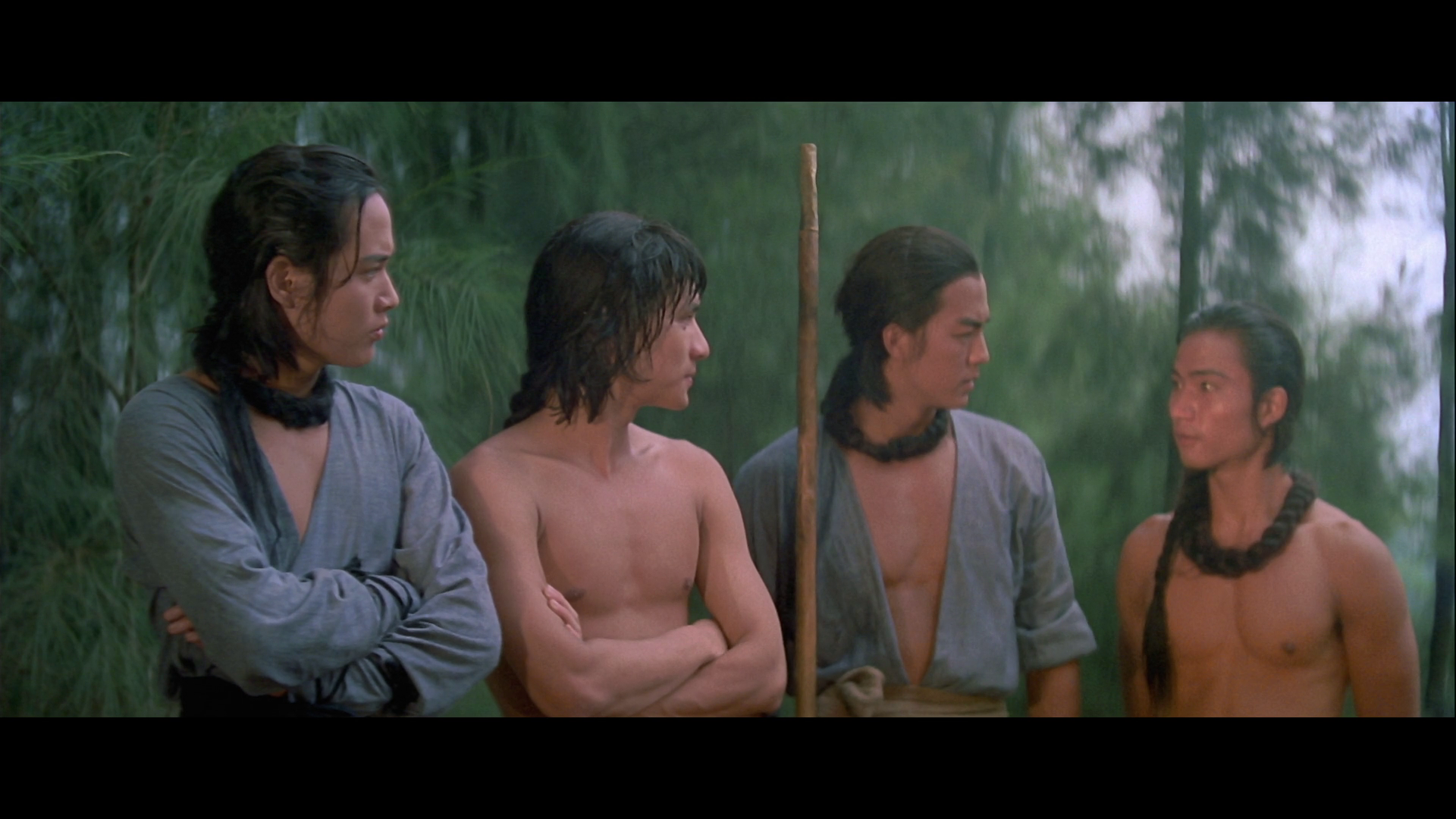 Hope of this presentation improving after the extended opening credits are soon gone. Five Shaolin Masters isn’t the worst case scenario, but the come down from previous movies in Arrow’s Shawscope set is drastic. This master shows signs of DNR and sharpening. Light halos around objects appear on occasion, and that causes aliasing from what’s certainly a lower resolution source. Detail limits itself only to extreme close-ups. Wide shots showing the countryside and flowing grass turn to mush. This master does not carry the look of a new scan.

While the print itself doesn’t reveal any notable damage, color fading shows age. Five Shaolin Masters struggles to replicate flesh tones with any accuracy. Dull primaries like the reds dotting the villain’s costumes fail to impress. Even the near constant greens dressing the scenery appear diluted and flat.

If there’s a plus anywhere, contrast carries a little pep. However, that’s not bringing any great depth because black levels falter. A deeper gray is a best case scenario.

Mandarin mono in DTS-HD sounds equally as weak as the video is flat. Every spoken word sounds as if played back on a broken speaker. The distortion is awful. Scoring suffers similarly, if not as rough. Bass crumbles, although treble holds up better (if still coarse at the peaks).

Historian Tony Rayns speaks on director Chang Cheh, followed by an interview with Kong Do. Two older profiles (from 2003) of actors Ti Lung and David Chiang come next. US credits, a trailer, and image galleries round this out.

A sloppy script turns Five Shaolin Masters into a storytelling mess, but the final battle is an absolute genre spectacle that’s worth the wait.