Ham and Cheese on Rye

There’s a charming idiocy to My Stepmother Is an Alien, a movie as unsure of itself as its main intergalactic character Celeste (Kim Basinger). On one hand, it’s a riff on 1950s teen exploitation, but doesn’t lean into that idea. There’s a wacky sex fantasy too, as Dan Aykroyd’s nerdy scientist falls for a clueless woman whose naivety in bed becomes a farce.

Plus, being from Universal, the studio turns the movie’s book-end into an update of their iconic Frankenstein lab. There’s still lightning, goggles, sparks, and fire, but also TV screens and computers. Aykroyd goes all out too into a mad scientist routine, albeit in a friendly tone.

Uncertainty unravels My Stepmother Is an Alien

Maybe it’s the ‘80s era screen hypnotism that salvages this awkward production. Even if the stars fail to generate laughs at any consistent level – doubly so considering their pedigree – My Stepmother Is an Alien gives them things to do that entertain. Basinger is effectively playing a dopey blonde stereotype in a one joke movie, but her ditzy act sustains the story as she tries to save her planet without revealing her true identity.

The title suggests a scenario from a teen’s perspective. That’s Alyson Hannigan in this case, her first role, playing Aykroyd’s daughter. For about 10-minutes, My Stepmother Is an Alien goes that route, Hannigan convinced Basinger is from outer space, there’s a stand-off, then a resolution. The script instead focuses on more adult matters, from the nonsensical science to flailing romance. Scenes with Hannigan feel forced to appease the title, and bring out the nostalgia.

My Stepmother Is an Alien is ultimately a minor film in a decade of Weird Science or even E.T. Uncertainty unravels My Stepmother Is an Alien, unsure of whether kids or teens or adults are the target audience. A sappy ending finds Basinger pleading to save Earth because it’s a planet with great things, the speech corny, but a means to cap what’s overall a persistently happy comedy.

The ‘80s usually utilized cynicism as a central comedic lure. Not here. Jon Lovitz plays a desperate loner always on the hunt for women, yet never takes advantage of anyone. Aykroyd asks multiple times if Basinger wants to have sex. Aykroyd’s small family unit, even as a widower, looks idyllic and happy. My Stepmother Is an Alien looks to stamp out negativity while providing laughs. It works, somewhat. 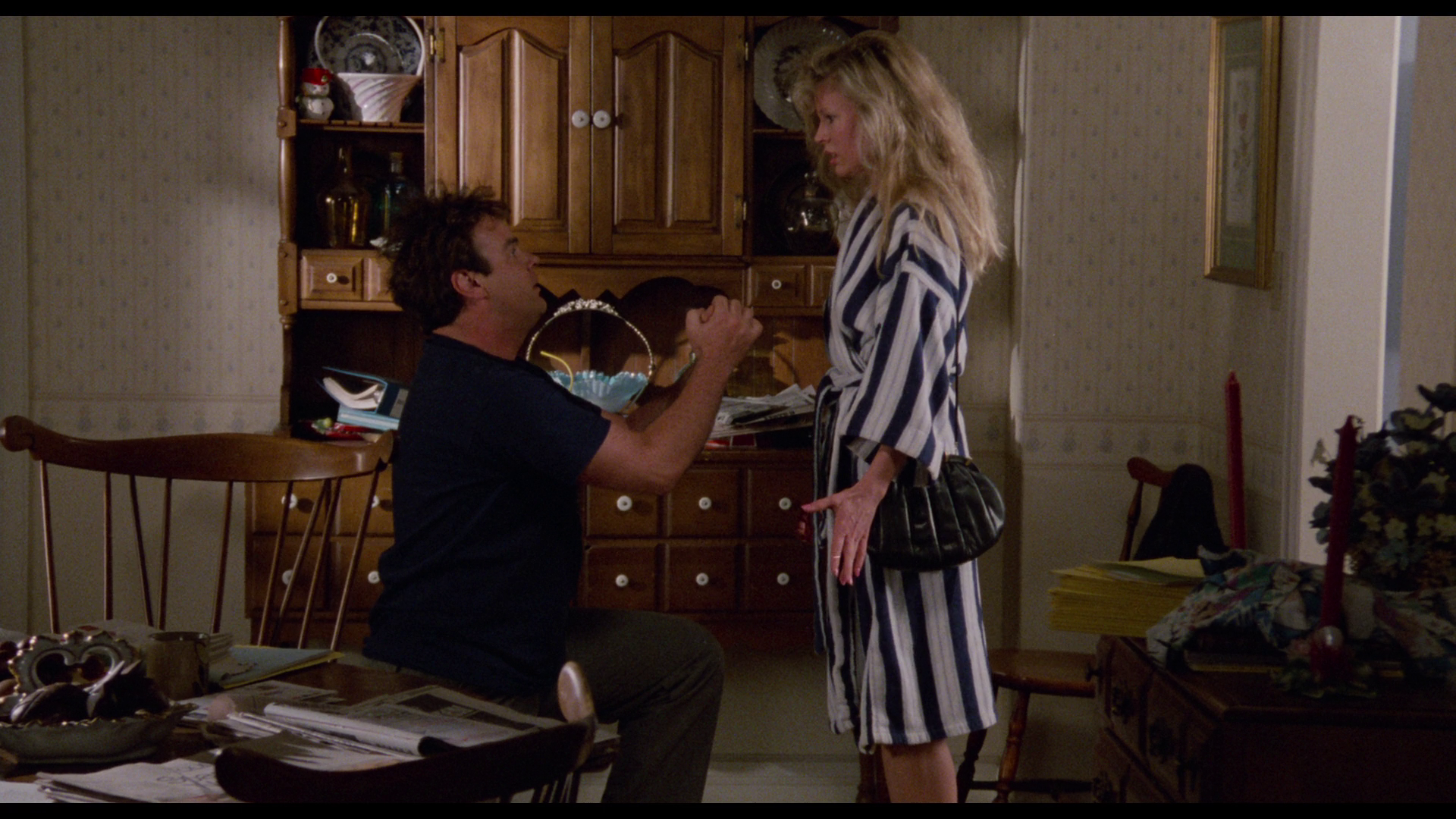 From a gritty film stock, Arrow’s encode has a challenge to keep My Stepmother Is an Alien clear from artifacts. Luckily, it does. It’s clear, even as the grain frequently spikes. This helps bring out the detail in a sharp, high-resolution scan. While not the most textured, there is a pleasing amount of fidelity. Strong exteriors and close-ups find consistency. Print damage is mild.

Deep color density brings out primaries in droves. Basinger’s initial red dress glows when on screen. Saturation impresses in every frame, properly preserved and lively without digital tools screwing things up. Flesh tones veer a bit pale, but inoffensively so.

Naturally dimmed a touch, the PCM track jumps from the ’80s with slightly strained dialog. Treble wobbles a bit, if not unexpectedly. Regardless, My Stepmother Is an Alien sounds firm overall, mastered and balanced well.

Music adds a touch of bass for a little range. It’s nothing extravagant, but sufficient.

Arrow brings Bryan Reeseman in for a commentary, followed by an interview with director Richard Benjamin. An image gallery and trailer follow.

My Stepmother Is an Alien

Although it wastes much of the comedic talent, My Stepmother Is an Alien offers a few flashes of corny entertainment worth revisiting decades later.