Let There Be Carnage’s best moments happen early as Eddie Brock (Tom Hardy) and his symbiotic alien Venom bicker in their apartment. Part of it is disdain, but trying not to alienate (pun not intended) each other given their usefulness together. The other part is classic mismatched couple comedy, and it’s a joy to watch them try to co-exist.

The rest varies between tolerable and atrocious. While it’s a relief to see a superhero movie cut to around 90-minutes, minus any bloat, what results is something that feels wholly unfinished. There’s no depth to anything in this movie’s sprint to a finish, and much of the plotting is utterly wasted on a mystery the audience already knows the answer to.

There’s hollow and then there’s empty; Let There Be Carnage is the latter

There’s hollow and then there’s empty; Let There Be Carnage is the latter. More attention is spent on visual effects than storytelling, a hope that comic book-derived fan service will help cover the inanity of everything else. It doesn’t.

In this era of superhero sequels, Marvel showed consistent effort in ensuring each film progressed an overall arc and characters. Let There Be Carnage feels entirely self-contained; the first Venom doesn’t matter to any notable degree aside from simplistic setup. The result is 90-minutes of pointlessness, a few minutes of marginal entertainment aside.

And poor Michelle Williams, handicapped by this male-driven conflict, reduced to a quivering damsel in the finale. For some reason, she’s gagged and bound. A male captive isn’t. When a movie is this thin, that’s the material drawing attention to itself.

Is Let There Be Carnage terrible? No. It’s perfectly content to exist and be, without nuance. Without grounding, there’s no tension to the action – each scene feels practically divested from the rest, as if the script were split in two, one writer handling dialog, another the fighting. During one rampage as Carnage breaks apart police cars and helicopters, Let There Be Carnage doesn’t even put a face to the victims. It’s a CG creature smashing CG vehicles minus any genuine stakes, and the money shots pass so rapidly, they carry no consequence either. The latter applies to the rest too. 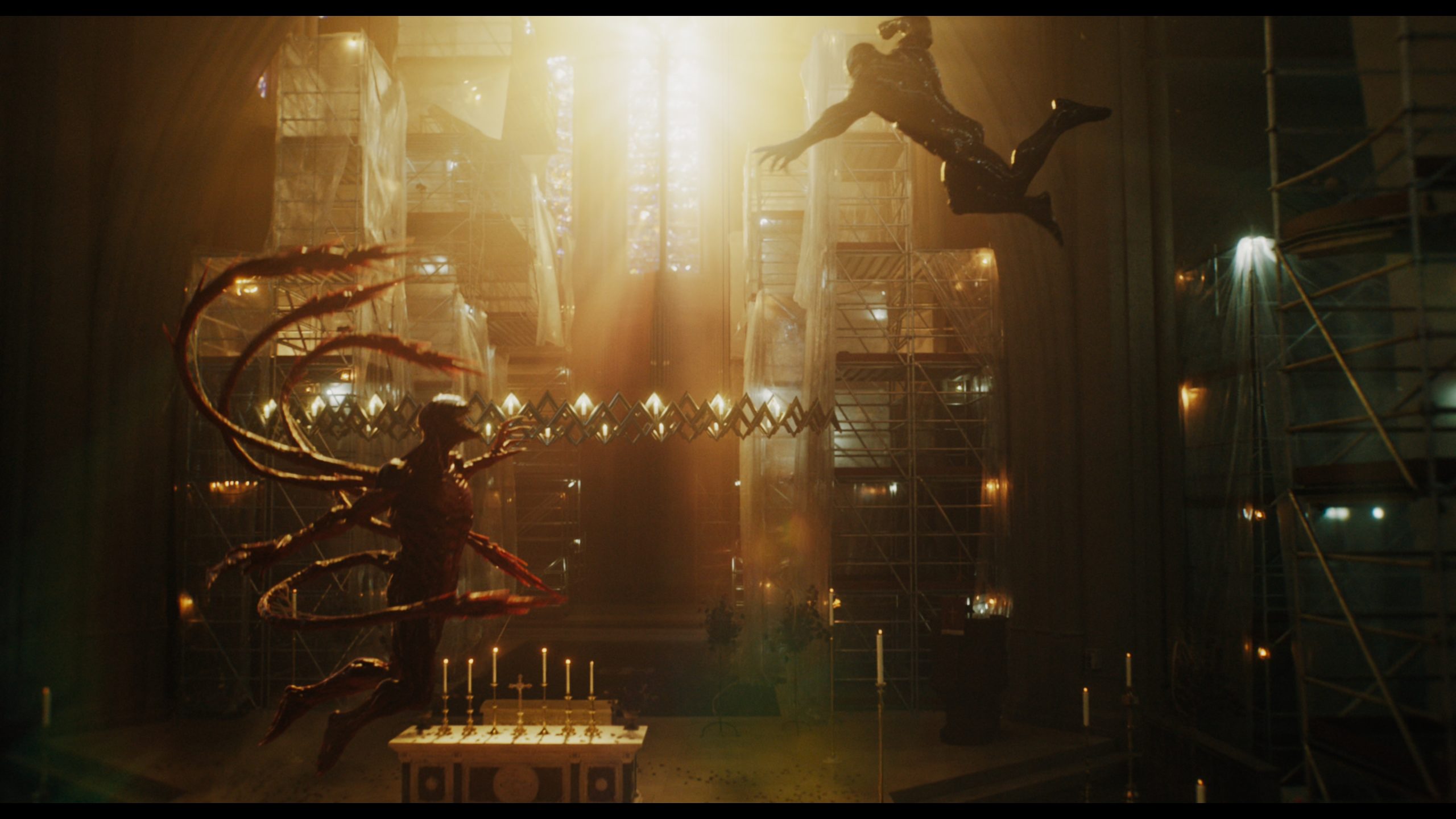 Hit with a pretty heavy slant in post production, the color grading veers toward a strict orange/teal look, mostly staying in cooler tones. Primaries stay diluted and flat by design. Dolby Vision gives them some density, if not saturation aside from a few elements (say, a neon sign, or a club interior).

Venom’s/Carnage’s voice brings a near constant source of LFE to this Atmos track, and everything else is great too in this regard. Fantastic low-end support keeps the room shaking. Action scenes continue the impressive subwoofer support, whether it’s Venom running and his footsteps thundering around or impact from punches.

Those looking for Atmos effects can use Let There Be Carnage often. PA announcements inside Frances’ cell come form the overheads. Rain/storms keep washing through the heights. Stellar directional support uses the other channels just as well. Tracking design keeps the rears active, objects smoothly panning. Stereos exhibit a wide split too.

Everything resides on the Blu-ray. Things begin with a bland seven-minute EPK running through the production’s effects and action. Three minutes of bloopers provide some entertainment value. Almost 10-minutes of deleted scenes follow that. Five additional EPKs detail characters and actors in a rudimentary way. Concept art and previs round things out.

Venom: Let There Be Carnage

Vapid and brief, Venom: Let There Be Carnage offers no substantial storytelling value to these characters other than a few rounds of fan service.