There’s no limit to how sensationally low brow Street Fighter is willing to go. The entire storyline is wrapped in a crass Gulf War parable, played primarily for laughs as if that’s amusing, then stuffed with idiot humor like prison rape locker room talk and Raul Julia’s absolutely glorious mad villain performance.

Revisiting Street Fighter brings a different reaction each time. Either it’s unforgivable studio schlock or dazzlingly entertaining in how brilliantly it fails; there’s no way of knowing which is which. The only consistency is Raul Julia’s effusively bold take on videogame villain M. Bison, a truly generous effort in what became the actor’s final role.

Little of the source material remains; what’s left comes in fragments. Chun-Li (Ming-Na Wen) seeks to avenge her father and Guile (Jean-Claude Van Damme) takes a military stance against Bison’s dictatorial rule. That’s partially right, but the rest stems from a distorted worldview where Bison becomes a stand-in for Saddam Hussein, and the “A.N.” for the U.N., or thanks to Guile flexing his American flag tattoo, just the U.S. There’s no martial arts tournament to disguise Bison’s corruption as in the game, although that was borrowed from Enter the Dragon. The switch isn’t ill-advised.

But it’s stupid. Impossibly, ridiculously stupid. At no point does Street Fighter make a decision as to whether it’s satire or serious. When it’s funny, Street Fighter is wonderful idiocy. Russian bear wrestler Zangief (Andrew Bryniarski) telling Bison to change the channel so the enemy base isn’t raided ranks alongside Airplane for brain-dead dumbness. Soon though, Street Fighter jostles the tone, putting Van Damme on a military super boat, shooting down enemy facilities as if in a glossy propaganda recruitment video for the Marines.

Because of the Street Fighter property, endless characters cycle through the plot, most useless and ancillary. In the final act, as Bison’s base begins erupting in flames, certain characters begin randomly donning game-accurate costumes. Why Balrog (Grand L. Bush) chooses to don boxing gloves in the middle of an international coup is forever unexplained. Then Dhalsim (Roshan Seth) apparently finds a neck ring in his laboratory, and a rope to tie his now-torn pants. That type of lunacy earns Street Fighter cinematic immortality, but in this case, it was just Tuesday. 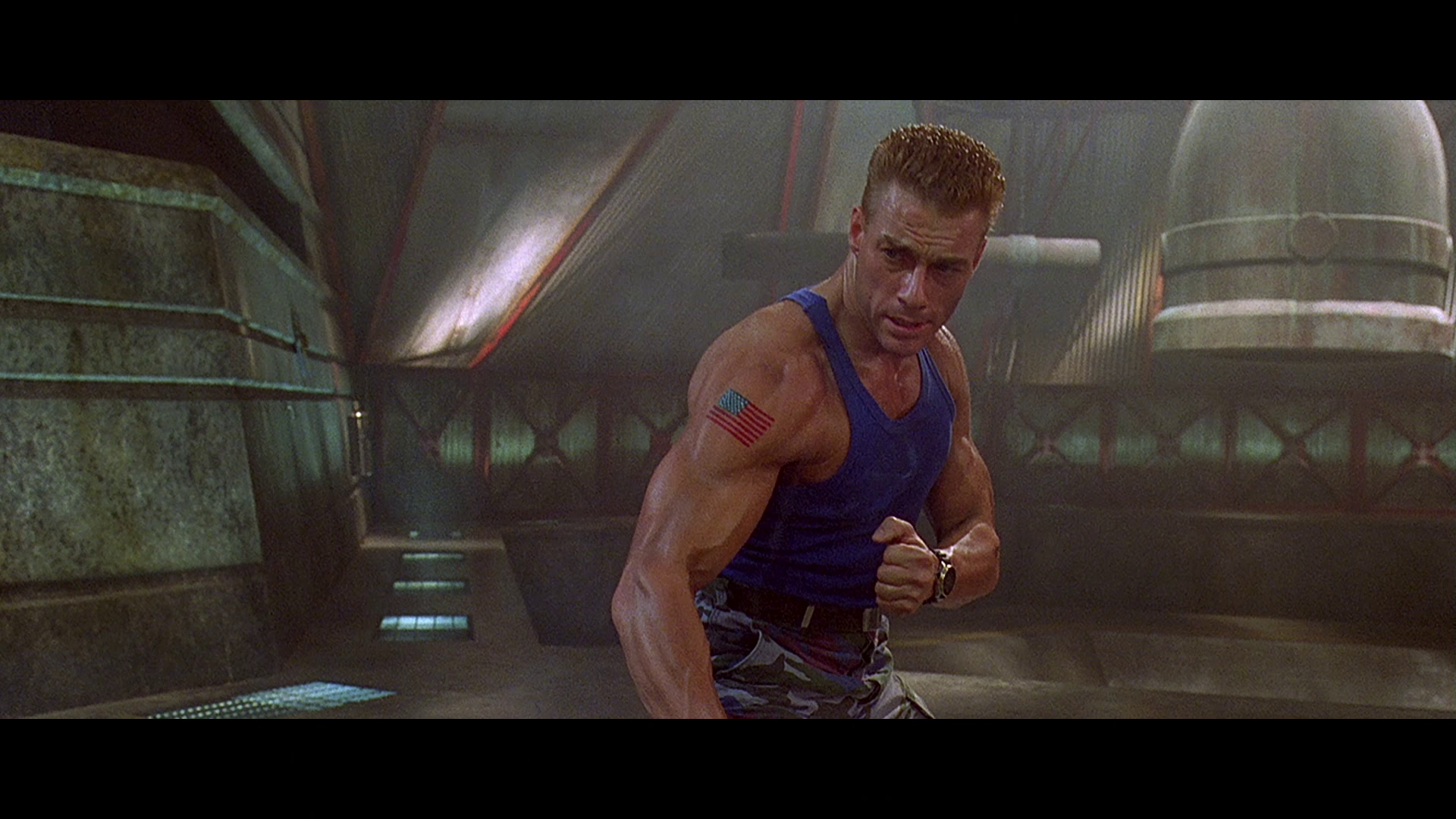 Porting over Universal’s crummy master, Mill Creek doesn’t do Street Fighter any favors. A heightened grain structure stems from notable edge enhancement. Halos surround most edges, hardened and thick. At least the grain is preserved, which given the origin, is a bonus considering Universal’s history.

The result reaches only a smidgen higher than SD. Some detail escapes, if not much much. When it does, it’s unimpressive. The scan comes from an older master, leaving resolution lagging behind the modern standard, even for schlock cinema like this. Compression introduces artifacts too, furthering the problems.

Bland, flat color saturation lacks pop, appearing decades older than the mid-’90s. Then, while black crush happens, it’s practically a relief from the noise that seeps into other, less dense shadows. Contrast is fair at least, even if such an observation happens mostly to find anything positive.

A sensationally stupid camp classic, Street Fighter turns the Gulf War into a dopey satire that in retrospect, is a hilarious mistake in the best way.