Creepshow’s second season features more wild tales of the macabre with a pair of incredible episodes which deserve far more attention and fame. Showrunner Greg Nicotero’s horror anthology series on AMC expands beyond its regular tales of terror with specials taking a pass at animation and the Christmas season. But its crowning achievement comes in an episode which merges Christopher Lee and Peter Cushing from the 1970s with a contemporary Justin Long acting beside them.

The animated special is based on two stories written by horror masters Stephen King and Joe Hill. The Creepshow Holiday Special is a fun and wonderfully twisted take on Christmas, as a group of shapeshifters meet for their weekly therapy group. Campy and outlandish, expect yuletide blood and mayhem aplenty.

“Night of the Living Late Show” is easily the most memorable episode this iteration of Creepshow has produced in two seasons. Justin Long stars as the inventor of a virtual reality pod which immerses the user in any movie they desire. A horror fan, he checks out on his marriage by repeatedly “living” in Horror Express. A Hammer knock-off from the early 1970s, Long interacts with the cast inside the genre classic. He appears alongside Christopher Lee and Peter Cushing, inserting himself into the movie’s plot. Easily one of the coolest and most interesting bits of television from the past decade.

Creepshow’s first season had stars but the writing was uneven, producing mixed results. Nicotero’s show hits a more even tone in season two with better peaks and fewer lulls. Upping the creativity, the storytelling is less predictable while maintaining the same impressive special effects. It’s a win-win for horror fans looking for something a bit different. 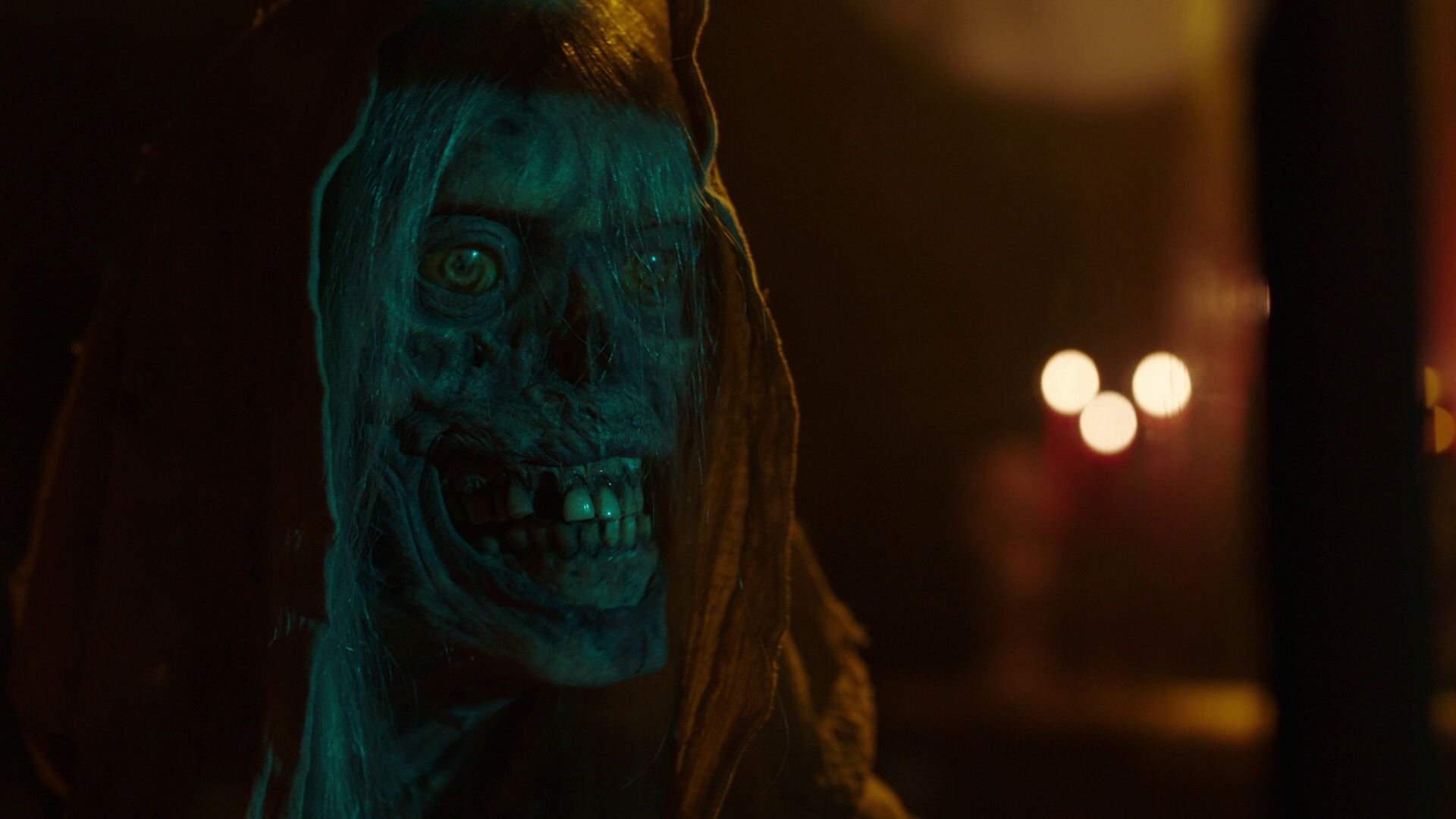 Outside of somewhat limited shadow delineation, Creepshow’s second season possesses razor-sharp definition and immense clarity. The Blu-ray’s 1080p video easily bests the cable broadcast version on AMC with cleaner textures and more depth, which is great seeing all the detailed gore and make-up effects in all their glory, Nicotero as director fully embraces vividly grotesque frights on screen. It’s impossible missing all the blood and gore in the beautifully saturated color palette and lively flesh-tones.

This BD set has all five episodes from the second season and the two important bonus episodes split between two BD-50s. Released by RLJ Entertainment, it’s a well-mastered AVC encode with no significant issues. It should be mentioned the animated special is shown in interlaced HD. While the animated special employs boldly simple art with thick linework, motion in it is awkward and limited. Those familiar with motion comics on the BD format will recognize its style immediately.

The 1.78.1 presentation exudes a crisp HD contrast with startling detail and nigh perfect black levels. Check out the amazing work done on Night of the Living Late Show, combining footage from the early 70s classic Horror Express with the new digital footage shot on the Arri Alexa. The resulting video quality is shockingly good and nearly seamless. I was stunned with the achievement and I hope the technology is used again for other episodes.

The imposing score by composer Christopher Drake is moody and atmospheric, smoothly spread across the soundstage in lush fidelity. The mastering is on the loud side with compressed dynamic range. A nice bottom adds extra kick when various ghouls and monsters attack.

Fans who picked up season one on Blu-ray will find a similar release for season two. Reversible cover art by Sanjulián, a cool embossed slipcover, and a neat little comic book insert serves as an episode guide. It’s a two-disc package which lines up perfectly with the first season’s excellent release.

Strictly talking about the bonus features, they are less substantial this time around if you don’t count the animated and holiday specials as anything more than regular episodes in this relatively short season. The primary featurette being an extended, in-depth interview with showrunner/director Greg Nicotero.

How It Was Made: Night of the Living Late Show featurette (07:40 in HD) – A fascinating breakdown of the tech used blending the 35mm footage from Horror Express with new digital footage.

Behind The Sound With Bare Knuckles Creative featurette (04:08 in HD)

Behind The Scenes Raw Footage featurette (04:56 in HD)

Behind The Scenes Photo Gallery (HD)

Full disclosure: This Blu-ray was provided by the label for review. This has not affected the editorial process. For information on how we handle all review material, please visit our about us page to learn more.

Greg Nicotero’s horror anthology series from SHUDDER and AMC gets creative for its improved second season with an amazing episode integrating footage from the cult chiller classic Horror Express.