There Be Water Dragons

Adapting a messy source comic that originated alongside the 1970’s kung-fu boon, Shang-Chi becomes as much an overstuffed copy as it is an enjoyable cross-cultural blend. Shamelessly though, the finale recalls Black Panther, with a native army hidden away, protecting their sacred land, fending off invaders. It’s as if Marvel has no other method to tell cultural fables.

Shang-Chi doesn’t draw attention to its Asian leads, including the capable Simu Liu in the title role. They just exist in a westernized society, away from their heritage. That thinking removed them from a world of mysticism, even as Marvel’s other heroes dole out superpowers on the regular. It’s a standard hero’s origin journey for Lu, but one that’s equal parts focused on him finding himself as much as it is accepting a fantastical legacy. Marvel’s skills are potent in slowly integrating wild ideas; Shang-Chi is a two-hour example of those talents.

Rightly so, the martial arts take focus, beginning with a stellar brawl aboard a bus that unlike most western fight cinema, avoids the mass edits used to hide the choreography. It’s not perfect, but notable in effort. Wuxia wire works then factor in, and then by the closing act, screen-filling Chinese dragons begin to war with one another.

It’s difficult to escape Shang-Chi’s familiarity though. Not for the wider Marvel-verse, which to date was conspicuously absent of Asian stars, but rather in how the story picks the most mainstream depictions from the chosen culture. A battle between father and son plays into a questionable trope, while co-star Awkwafina’s family scenario leans on those same cliches. Shang-Chi doesn’t treat the supernatural elements via any creative grandiosity either – Lu and company ride on the dragon’s backs because it looks cool (and recalls nostalgia for Neverending Story in more than a few shots); that’s just what American audiences expect from Hong Kong entertainment.

Much as Shang-Chi avoids the source’s dated materials, it’s not producing any forward-motion either. It’s still locked to what’s known about Asian fantasy lore, believing that Asian leads are representation enough. That is a positive, but featuring their faces amid a template Marvel – of which, again, too closely recalls another racially-determined movie in the ranks – whiffs on being a teachable moment. It’s fun a movie, but equally so a wasted opportunity in a covid-locked world where Asian hate is so abhorrent. 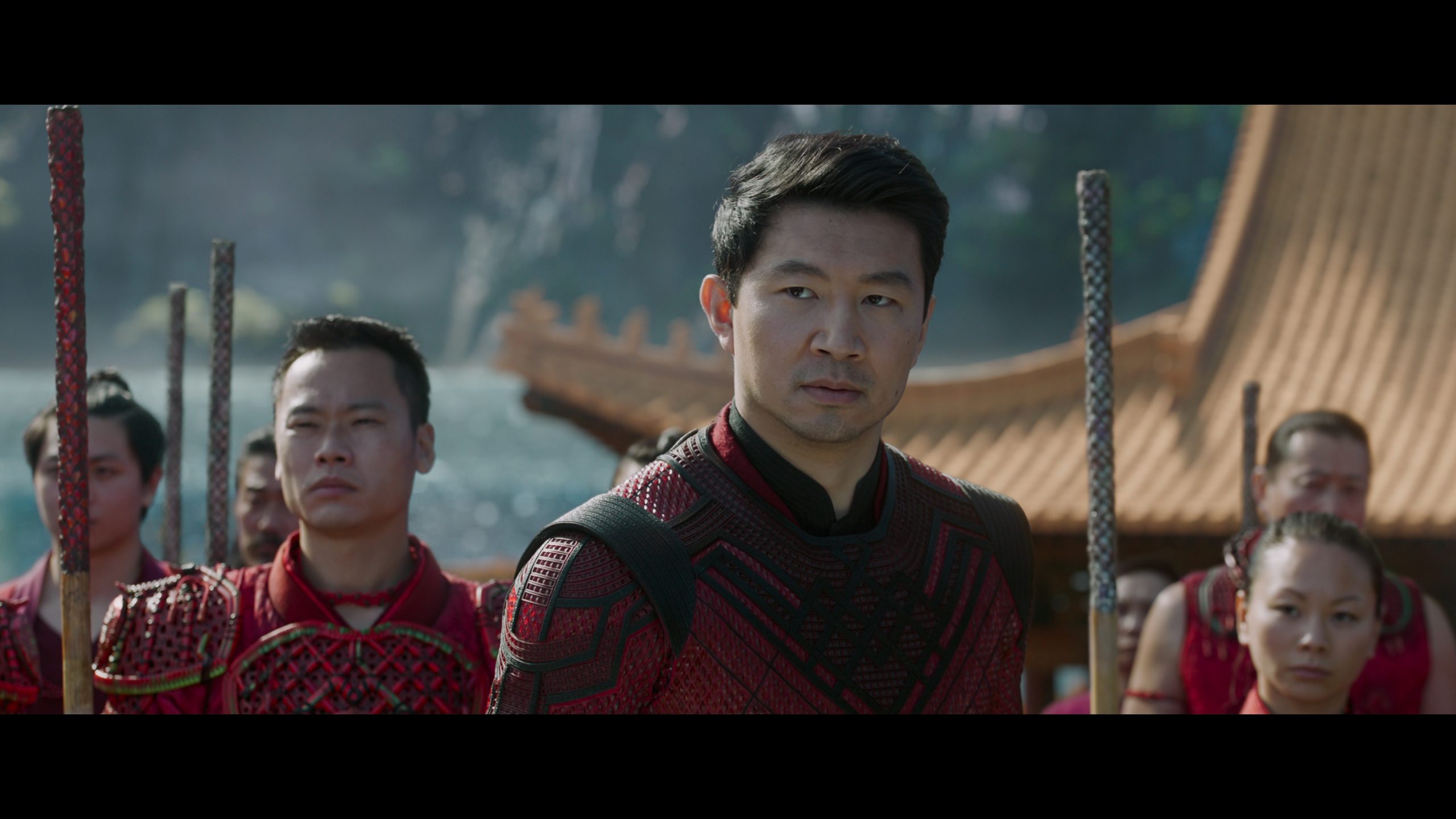 Pedestrian source material doesn’t have much on offer. There’s a sloppy, glossy quality to the 2K-finished imagery. This limits detail and fidelity doesn’t shine at all; at best, it’s rudimentary. Wide shots lack in definition, and from the outset, there’s no doubt this is an upscale.

Reserved color keeps the palette dry. That means reserved primaries that lack energy, even down to the bleak flesh tones. This isn’t out line with past Marvel aesthetics, but Shang-Chi looks especially drab considering the potential in the costumes and San Francisco locale.

Disney’s HDR helps the highlights take prominence, such as anything that sparks or glistens. Driving into Hong Kong, the neons look incredible. Light is plentiful, and the glowing rings lay it all out. However, black levels recede like the color, lessening the depth. True black is utilized sparingly, only adding to the routine nature of this presentation. From all of this, the plus is absolute clarity. Noise rarely invades the visuals, and even when evident, barely makes an impression.

Whether by design or the disc, Shang-Chi’s Atmos track lets the music overpower the effects. It’s as if everything other than the score is purposefully reduced in intensity. This isn’t a case of Disney draining range because said soundtrack lands heartily in the subwoofer. The bass line rumbles well enough.

Ring attacks sweeping around the soundstage pan accurately, if not extensively. Compared to similar moments in say, Underworld, the positional motion lands on the weaker side. Ambiance performs okay, like in the fight club where crowds swell into each speaker. Atmos effects flatten out however, rarely utilized even when the visuals offer potential. With all of the water splashing during the finale, there’s no reason not to notice the heights engaging, but that’s the case here.

Disney keeps bonuses on the Blu-ray. An eight-minute, generic making of props up the inclusiveness of the project. The father/son relationship at Shang-Chi’s comes into focus in the next featurette. A short gag reel follows. Eleven deleted scenes reach 14-minutes. Then, there’s a commentary from co-writer/director Destin Daniel Cretton and co-writer Dave Callaham.

Shang-Chi and the Legend of the Ten Rings

While Shang-Chi oftentimes feels more like a soulless mimic of Hong Kong cinema, the culture mix results in something distinctive.