Star Evelyne Kraft spends almost the entirety of Mighty Peking Man wearing a two-piece animal skin bikini that impossibly binds to her breasts. She’s effectively a womanly Tarzan, lost to the jungle, befriending animals, and one of them happens to be a 40-foot gorilla.

In the funniest sequence, the gorilla watches Kraft seduced by Hong Kong-cinema regular Danny Lee. The monster, dejected he’s lost his bride, depressingly walks away, kicking a rock in frustration. That body language represents the male audience duped into thinking they’d see nudity, but Mighty Peking Man is classier than that. Somewhat. Almost… not really.

Out of the King Kong knock-off rush that followed the 1976 American remake, Mighty Peking Man is the best of the lot. Endure hilarious clunkers like Yeti as a completionist, but study of this small, short-lived sub-genre can end here. Shaw Brothers studios, far out of their zone in attempting a giant monster story, recruit Toho veterans to handle the visual effects, and that, not the leering camera focused on Kraft, is the reason to watch.

The story is anti-capitalist hooey, although where King Kong ’76 made a point to admonish the oil industry, Mighty Peking Man gives a gas giant valuable on-screen promotion, then uses fuel to dispatch the monkey. In the midst of making the villain an exploitative thug who abuses the innocent creature (and tries to rape Kraft’s character), industry still wins the day.

If there’s a risk, that’s an interracial romance that pairs Lee and Kraft together, unusual in Hong Kong features, certainly in 1977. Everything else plays to type, including the jungle adventure, a boat ride to the mainland, a sold out stadium, and the destructive rampage. Being of the ‘70s, the ending chooses cruel nihilism, in that sense another chance at breaking the formula, if only Mighty Peking Man ever cared enough to make people count.

What works are the stellar, even outstanding miniature effects. Suit maker Keizo Murase doesn’t produce his best work in creating the title character, but around him are Koichi Kawakita and Sadamasa Arikawa, some of Toho’s best-in-class. In recreating Hong Kong skylines, with buildings stretching to the set’s ceiling, they best the American effort in King Kong. The detail and lavishness in those models counters the messy editing and sloppy composites, making the last act pure joy for Japanese kaiju fans. It’s a total delight. 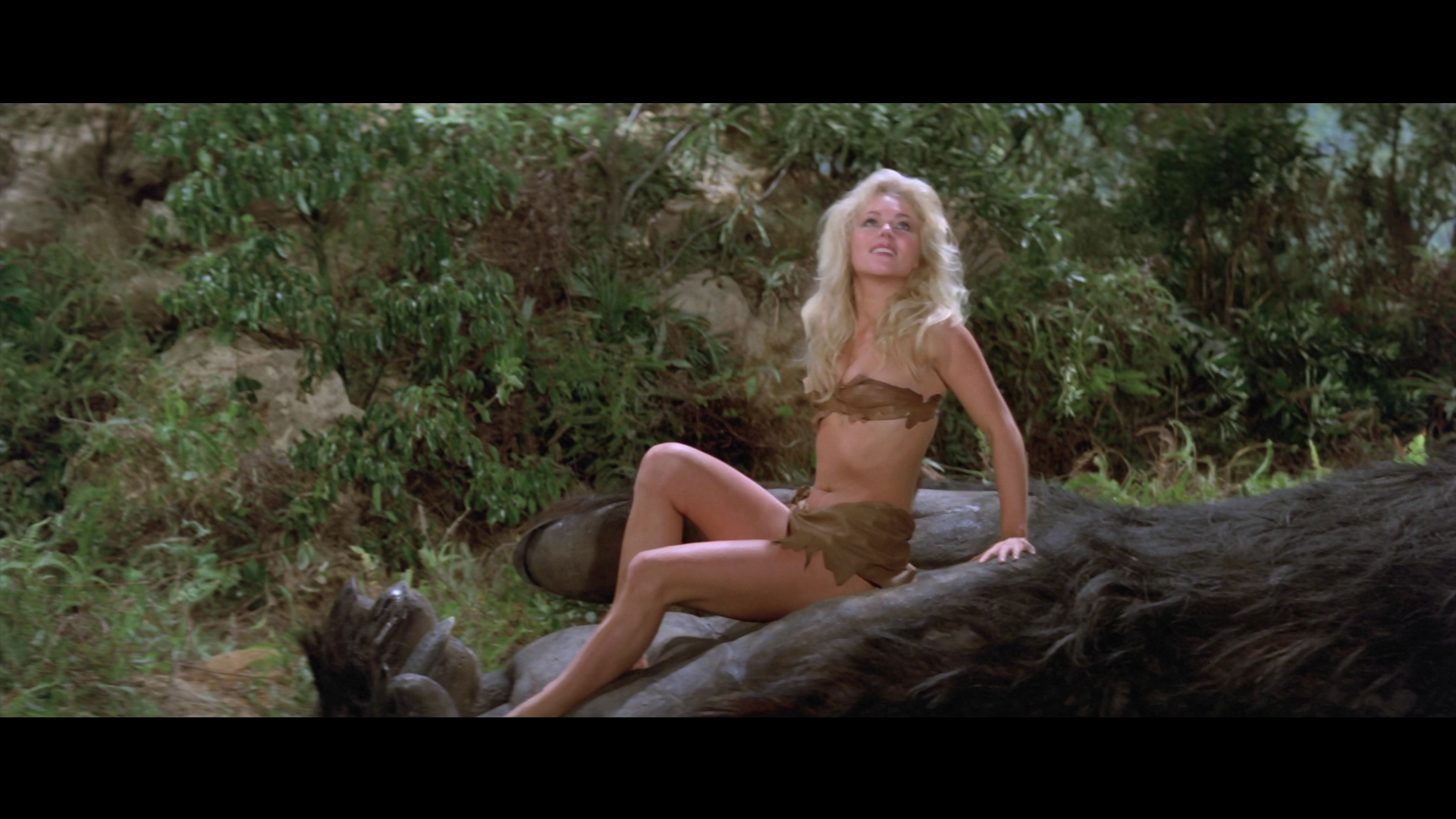 Long overdue for a Blu-ray after the DVD went out of print, Mighty Peking Man’s HD debut is appreciated if unfortunate. The transfer shows distinctive signs of filtering and noise reduction, leaving behind a notably glossy appearance. Grain is nearly nullified in whole, and that waxiness saps life from what looks like a reasonably new, high-resolution master. Some scenes improve (especially on the boat) but it’s still listless. The print itself looks superlative too, showing hardly any damage or dirt.

Steering warm (if not digitally graded to any obvious extent), a pleasing palette brings bold primaries, especially reds and greens, which when in the jungle, bounce off one another gorgeously. Appealing flesh tones sustain their strength. Sans the DNR, Mighty Peking Man is nearly flawless.

Both Mandarin and the English dub exhibit their age. This is especially true of the score, wobbly whenever approaching higher frequencies, if sustaining some bass. Fidelity falters all around, although the dialog’s scratchiness remains inoffensive considering the 1977 release date. Keep expectations low, but not without reason.

Travis Crawford is the chosen one for a commentary track. Arrow tracks down suit designer Keizo Murase, then interviews him for almost 20-minutes about his career. An interview with directory Ho Meng-hua dates back to 2003, and runs 24-minutes. A 2004 interview features actor Ku Feng. The latter lasts seven minutes. Incredibly, Arrow finds Super 8 footage (sourced from a VHS) of the production, 28-minutes worth. While silent, this includes effects work, Shaw Brothers lot scenes, and more.

Arrow goes further and includes an unrestored version of Mighty Peking Man, and while in SD (with dubbed dialog only), at times it’s preferable as the grain is preserved. Alternate credits, trailers and an image gallery finish up some stellar bonuses.

Mighty Peking Man is undoubtedly shameless in ripping off King Kong, but there’s no denying the incredible work that went into the visual effects.