Mel Brooks’ spin on Dracula lore doesn’t have the focus of the writer/director’s Young Frankenstein. Dead and Loving It takes potshots at Bela Lugosi, Hammer’s Dracula, and the then recent Bram Stoker’s Dracula, but never decides which is which or when to strike.

Dead and Loving It needs that focus to know what direction Brooks’ comedy is coming from. High Anxiety, suffering from an effort to parody all of Hitchcock, endured the same issue. The result is something that looks from the mid-’90s, not the ‘30s or ‘60s. Yet, the pattern is that of Universal’s Lugosi classic.

Dead and Loving It finds itself dominated by superficial visual gags

It’s also tired, taking ages to set-up jokes. When delivery falls, that’s time wasted… and there’s too much time wasted in Dead and Loving It. To date, this is Brooks’ final work as a director. That shows. A younger Brooks would take aim at the sensuality evident in Dracula lore. Here, that’s doled out piecemeal, and limited to only a few scenes.

This isn’t a pile-on because when Dead and Loving It works, those high points show Brooks’ comedic talents never left him. Renfield, played with absolute joy by Peter MacNicol, sits down to lunch but can’t stop munching on random insects. The trust placed on MacNicol is the right call, and his antics represent the best of Dead and Loving It. So too is a bloody stake-to-the-heart sequence, hilariously excessive and equal to any single gag in Young Frankenstein.

With the talent on offer, including Blazing Saddles alum Harvey Korman, Brooks himself, and Leslie Nielsen as the star, so much of this effort feels wasted. Dead and Loving It finds itself dominated by superficial visual gags or meandering bits like Van Helsing (Brooks) and Dracula feuding over getting the last word (if admittedly carried through into the final frames to great effect).

The best thing to say for Dead and Loving It is that it’s harmless fun. There’s no need to focus, and letting the mind wander during a rewatch causes few problems. It’s a shame though given the pedigree and possibilities Dead and Loving It came through so listlessly. Dracula and Brooks deserve better. 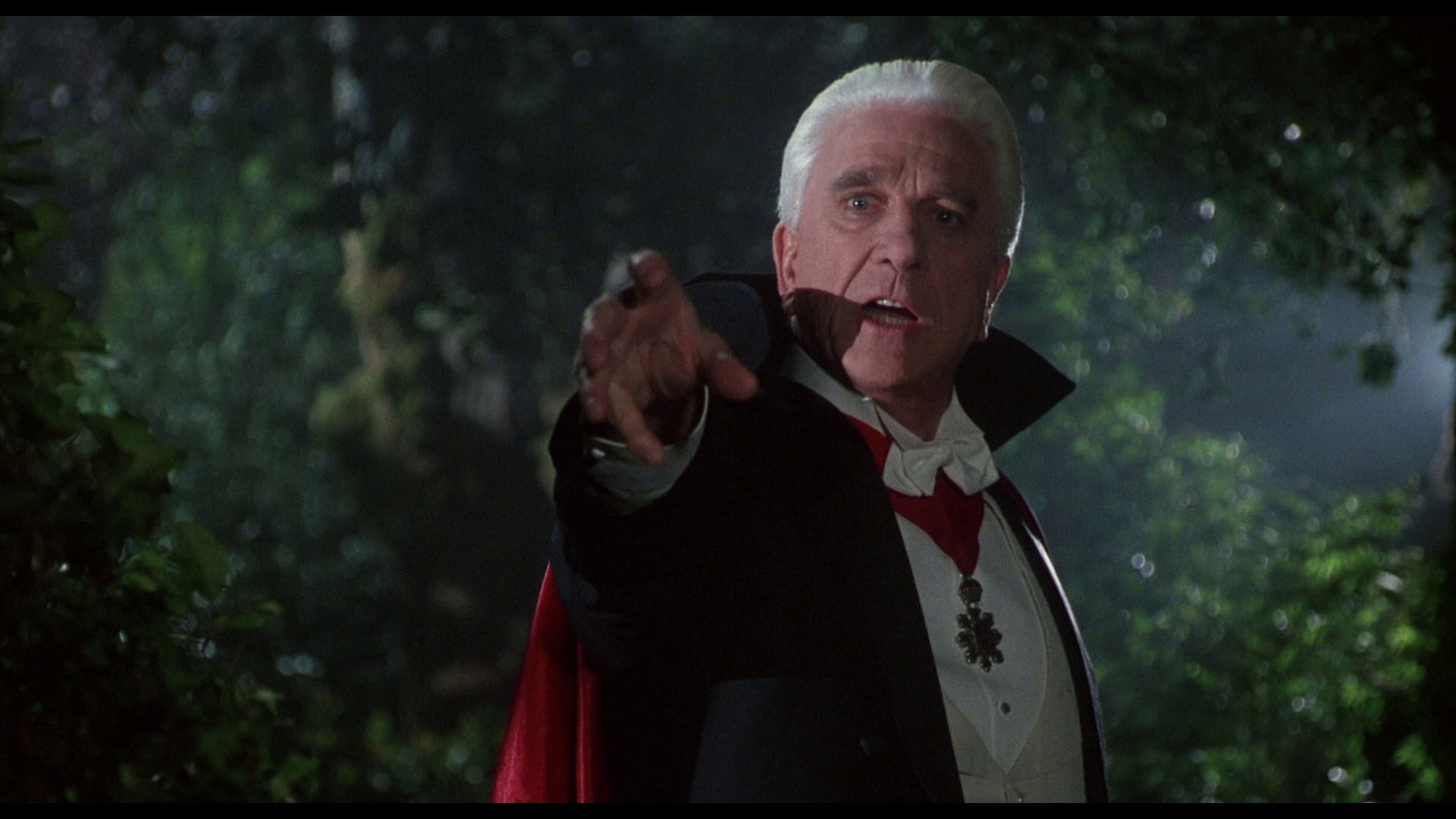 At times from the scratch and dent section of the vault, other times not, this is a decent Blu-ray debut for Dead and Loving It. Grain is preserved well enough, although slight smearing suggests some level of processing/filtering. That’s not enough to knock out the sharpness or detail in a moderate presentation. Resolution is only fair overall, dipping when the camera pulls back, if stable when in close to handle facial definition.

More impressive, the color saturation produces substantial primary brightness. Reds in Dracula’s scarf pop when against the black cloak. A pleasing warmth to the palette brings out flesh tones that stay consistent throughout.

A typical DTS-HD stereo track doesn’t do much to impress, remaining centered and rarely exhibiting any directionality across the fronts. At least Dead and Loving It doesn’t limit audible clarity. Precisely replicated dialog stays in balance. Bass factors in from the score, a small rumble that shows minimal range in a routine mix.

Dracula: Dead and Loving It

Dracula: Dead and Loving It is in the right ballpark, but doesn’t have the snap or focus of Brooks’ other comedic masterworks.