Jane Austen’s classic novel Sense and Sensibility comes to dazzling life on the screen from director Ang Lee with an elegant screenplay by actress Emma Thompson. Nominated for multiple Academy Awards, the rapturous ensemble stars Hugh Grant, Kate Winslet, Alan Rickman, and Emma Thompson herself. Funny, tender and delightfully staged, this Sense and Sensibility may very well be the most sensible Jane Austen adaptation of them all.

Spirited and lively, Ang Lee’s romantic comedy provides all the charm and wit of Austen’s beloved work in a well-crafted package. The British cast is simply marvelous, led by a glowing performance from a young Kate Winslet before her Titanic fame. Alan Rickman is the film’s unsung hero as Colonel Brandon, a perfectly understated portrayal which generously allows his female co-stars their proper space and importance as the primary characters.

The Dashwood sisters face economic hardship and dim marriage prospects after their father passes and the family’s wealth all flows to their half-brother. Under English law all of their father’s vast wealth and property passes to his only son, John Dashwood. The elderly Mrs. Dashwood and her three daughters, Elinor, Marianne, and 12-year-old Margaret, all move out to the countryside living with their cousin. It’s a serious step down from their previously lavish lifestyle.

Eldest sister Elinor (Emma Thompson) pines for the soft-spoken Edward Ferrars (Hugh Grant), a gentleman suddenly called away into service far from her. Middle sister Marianne (Kate Winslet) is a passionate firebrand who strongly believes in true love. Living in the countryside with few eligible male suitors, they meet the mysterious Colonel Brandon. Older and respectable, Brandon is an enigma for their affections. The sisters’ different approaches to life and romance drive the skillful narrative, a timeless tale of wry love and irony.

The delicate direction and sharply drawn characters coalesce into a winning romantic comedy with palpable feeling and hearty laughs. Jane Austen’s novel has rarely been treated so well with such deft handling and care. Beyond the confines of mere costume drama, Sense and Sensibility is a charming romantic masterpiece brimming with palpable love and tenderness. 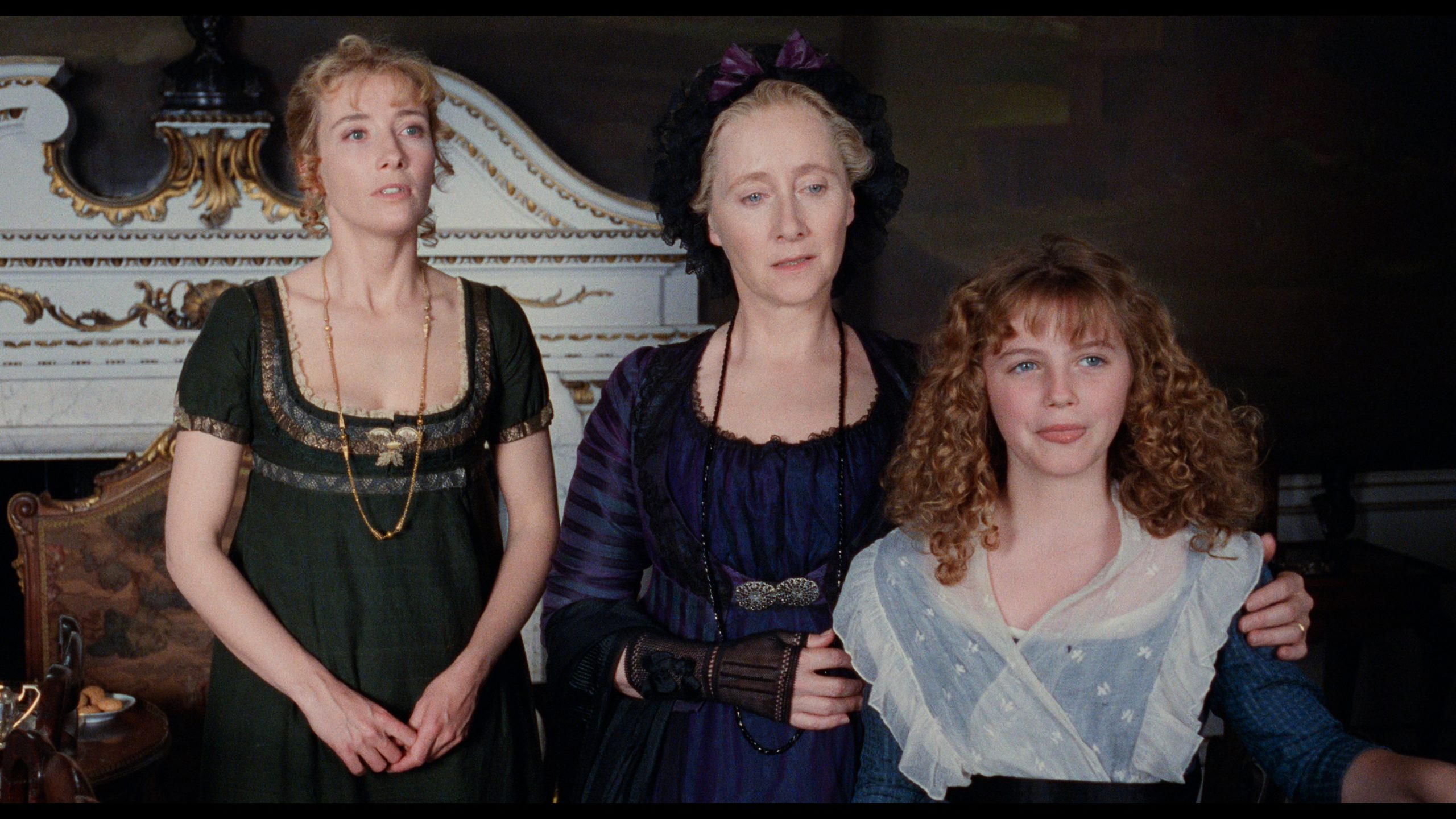 If one wonders why Sony picked Sense and Sensibility as a movie to showcase on UHD, this masterful film-like presentation at 4K breathes new life into the 1995 movie. It’s a gorgeous transfer featuring well-crafted HDR highlights found in most exterior shots. The lush green foliage of the English countryside sparkles in amazing depth and clarity. Scenic gardens and the rolling hills jump out in the decidedly impressive 1.85:1 video.

The new transfer from the negative by Sony is a quantum leap in detail and clarity over Blu-ray editions such as the Twilight Time release. There’s more depth and definition than expected from the period romance, revealing lovely close-ups packed with unfiltered details. Vibrant colors and flawlessly organic grain replication best anything possible at 1080p resolution. Wonder no more why Sense and Sensibility is one of the fortunate few films released on UHD.

The meticulous grading and color correction reveals a rich, inviting contrast replete with evenly saturated primary colors. Flesh-tones are a healthy pink. Inky black levels and proper shadow delineation mark most interior scenes. A trace of ringing may appear here and there but otherwise this is a beautifully film-like reproduction of finer detail and cinematic fluidity. The perfectly preserved film elements are in pristine condition.

A new Dolby Atmos soundtrack does everything it can with the lightly engaging sonic atmosphere of a Jane Austen romance, sporadically enhancing the discrete mix with surround elements. Dialogue is crisply clean while surround channels come alive most often for environmental cues. The sound design is most active when the settings move outside, spreading an array of isolated cues over the entire soundstage.

Sense and Sensibility isn’t a movie made for explosive dynamics. Subtle and delicate, the score is a lushly recorded symphonic piece. The Dolby Atmos upgrade is a nice touch kept exclusive to UHD.

Dozens of subtitle options are offered by Sony, including English and English SDH. European listeners should have no problem finding their particular language available. Several lossless dub options are also present, including French and German.

For the moment Sense & Sensibility on UHD is only available as part of Columbia Classics 4K Ultra HD Collection Volume 2. The expensive box set contains Oliver!, Stripes, Anatomy of a Murder, Taxi Driver, and The Social Network. Sense and Sensibility comes with a Blu-ray copy and slipcover, not to mention a Movies Anywhere digital copy which redeems in UHD video quality.

All special features are found only on the included Blu-ray. The only new special feature is the 25th Anniversary featurette, a generous zoom meeting-style event between several lead cast members and Ang Lee. The others are brought over from the Twilight Time BD. Note the isolated score found on that Twilight Time disc is absent.

It’s quite a line-up of featurettes with the cast and crew, detailing various aspects of the production with behind-the-scene material and interviews.

Back To Barton Cottage Featurette (27:37 in HD) – Emma Thompson, Kate Winslet, Ang Lee and other important contributors appear in this group Zoom videoconference marking the film’s 25th anniversary. They reminisce about working together in a lively discussion which feels honest and inviting.

A Sense of Character Featurette (8:14 in HD)

Locating the World of Sense and Sensibility Featurette (05:42 in HD)

Elegance and Simplicity: The Wardrobe of Sense and Sensibility Featurette (03:57 in HD)

An effortlessly smooth and timeless adaptation of the Jane Austen classic Sense and Sensibility with outstanding lead performances from Emma Thompson, Alan Rickman, and Kate Winslet.