Watching Menace II Society, it’s hard to parse how the public debate in 1993 wasn’t how to fix inner cities, but rallying cries to censor music originating in those places. That is what the mainstream found abhorrent, not why the brash lyrics existed in the first place.

Menace II Society wants to expose the issues. Other movies came before, including Boys n the Hood and Do the Right Thing, but neither of those hit with such immediacy. In seconds, Menace II Society engages in racial division, social distrust, and brutality. It’s relentless, and just as vocal.

If there’s a fault, Menace II Society begs for an open dialog more than it exists to tell a story. Caine (Tyrin Turner) is less a protagonist than an amalgamation of truthful, raw urbanity. Through him comes a cycle of crime, murder, racist policing, teen pregnancy, and frustration while trying to find an out. He’s surrounded by similar personalities, some more quiet, others doubly brazen, causing a cruel tug-of-war as the counter-influences vie for attention.

This isn’t a film asking for sympathy, just an honest discussion and potential solutions. Caine’s guilt follows him through life. His decisions, often wrong-headed, turn insurmountable. Menace II Society’s isn’t glamorizing Caine so much as using him as a beacon to expose a broken system. Gruesomely bloody violence isn’t treated as spectacle, only tragedy, even if the co-directing Hughes Brothers’ style relies on music video-esque slow motion that robs those scenes of power.

Important to Menace II Society is the history. Two real world, racially divisive riots precede this otherwise fictional story. The chosen news clips expose the inherent bias as broadcasts read from the same script that only points out injuries to police, placing erroneous blame on the rioters, not the conditions that led to the outbreaks. As such, Menace II Society comes off like a 90-minute editorial, but one with its mind focused on uncomfortable education.

In an era when everyone has a camera, scenes where Menace II Society shows police beating Caine and his friend feel almost unnecessary; that violence isn’t hidden anymore. Reality is shown as it happens because the news can no longer dodge the overt racism. It makes those who spoke up against hip hop for words rather than content seem impossibly naive – and likely, that denial of truth was a personal choice. 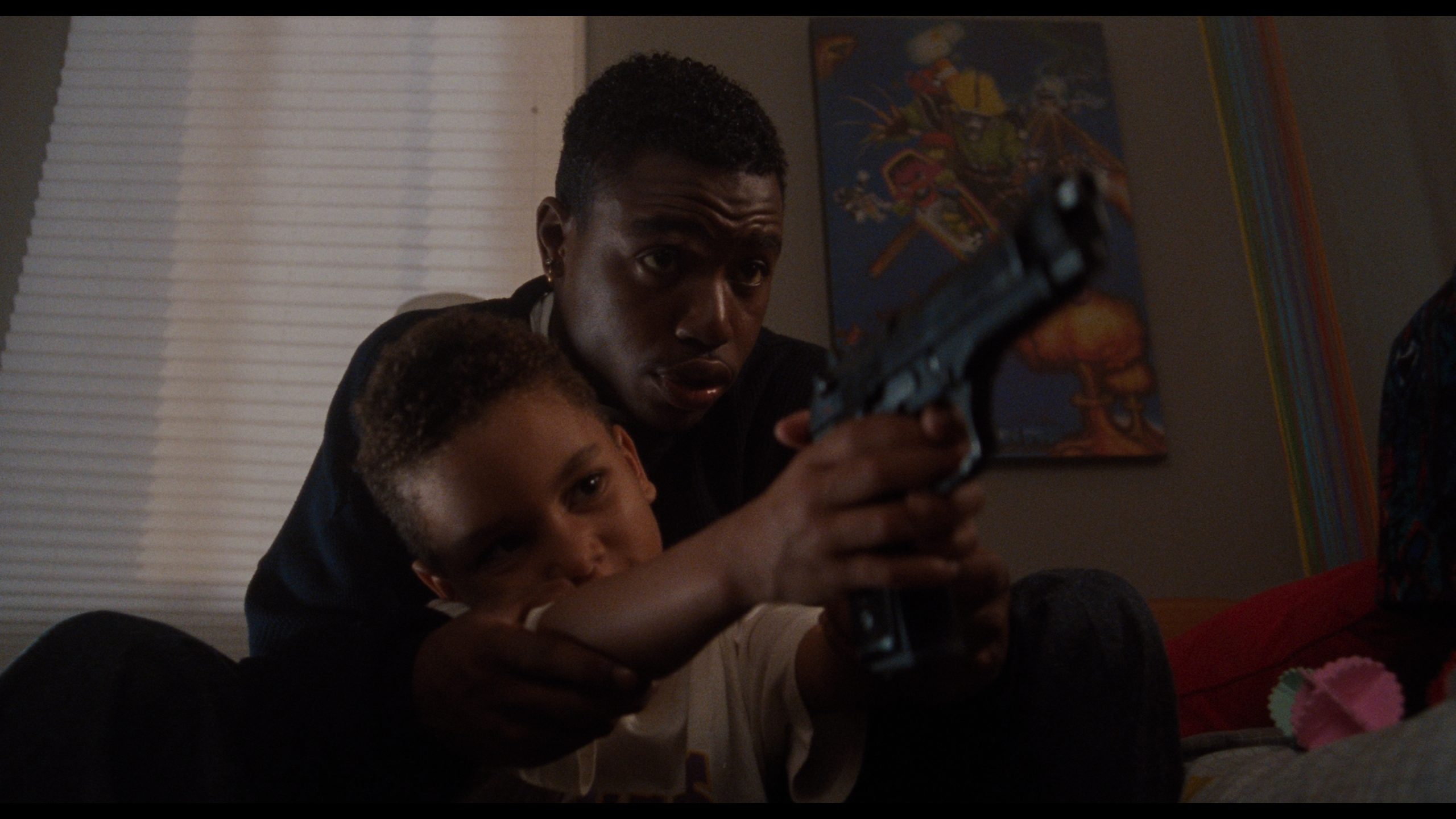 One of the first 4Ks to come from Criterion, Menace II Society begins this line with high standards. Other than scenes draped in deep red/purples (introducing slight chroma noise), the encode replicates the source perfectly. Superlative clarity shows the maximum resolution, making this a true visual spectacle on the format. Nearly every frame looks new, as in “shot yesterday” new. Fidelity overloads the screen. Texture flows in from all directions.

Generous color saturation stays rich and bold. Intensity gives the city constant variety, and while the above mentioned reds do create issues, there’s little question they display a vibrancy that’s rare even on UHD. It’s gorgeous.

Offering both the stereo and remastered 7.1, both mixes bring equal fidelity. Dialog sounds pristine, the music superb, and the score exacting. Occasional bass stems from the soundtrack.

The refreshed soundstage uses the rears sparingly, choosing a reserved approach to make key moments stand out. Neighborhoods swell with ambiance and helicopters sweep around. Mostly, Menace II Society sticks to the front soundstage, and uses it well.

Criterion re-ups the commentaries from the Hughes Brothers individually (dating back to 1993) on the UHD. On the Blu-ray, a conversation with Albert Hughes and screenwriter Tyger Williams lasts 34-minutes. Then, Allen Hughes joins Bill Duke for a 26-minute chat. Cinematographer Lisa Rinzler provides commentary for 21-minutes of selected scenes. A 2009 featurette also hits 21-minutes. and it’s still a solid retrospective. Another 1993 interview with the Hughes Brothers runs 11-minutes. Deleted scenes, a storyboard comparison, and 2Pac video (directed by the Hughes Brothers) finishes the disc.

One of many pieces of ’90s culture trying desperately to draw attention to inner city issues, Menace II Society still works in the modern day.