Separated from the Red Scare parable that defined the original, Invasion of the Body Snatchers succeeded in remake form through a bleak, punishing look at a changing society. It’s a better film too.

Invasion of the Body Snatchers focuses on intellectuals – scientists and doctors and authors, high society without braggadocios lifestyles. City living isolates them from everyone else, the social decay around them relentless. Brainpower dwindled when cities became over-populated, and the savvy became outcasts. Donald Sutherland’s health inspector Matthew drifts through downtown plazas bathed in red lights, live nude shows, poverty, and litter. The fear isn’t that of a foreign nature leeching our culture to institute communism, it’s that social order already collapsed. When a man is hit by a car, Matthew states, “The police will help.” They don’t. Safety is lost.

Invasion of the Body Snatchers succeeded in remake form

With the opening moments, Invasion of the Body Snatchers shows plant life in the city’s shadow, concrete engorging on natural land. Rising pollution fears instills an ecological slant to this retelling. Co-star Nancy Cartwright explicitly notes people, “Eat junk and breathe junk,” a virulent call to panic that goes unheard. Although of an alien origin, seeing plant life takeover, restoring a balance as people fall to lingering spores, feels like an organic system righting itself. Doing so means no national hero, no idolization of people who fight back, or any chance to stop this spread. M. Night Shymalan tried the same thing decades later in The Happening – killer plants – but fumbled miserably. Invasion of the Body Snatchers holds the crown.

Unknowingly, this remake began a short-lived cycle that saw filmmakers mine the 1950s for source material. A number were successful from The Thing, The Fly, and The Blob. The latter chose raw shock value, yet the former two elevated themes in the source, grounding real world fears that, when viewed now, hold up better than an empty nuclear menace.

Pop culture latched onto that above trio, letting Invasion of the Body Snatchers fall to the wayside. Blame additional remakes since; Invasion of the Body Snatchers finds different forms (ironically) to take every decade or so. None matched this Philip Kaufman-directed one however, made at the right moment in time to capture a growing discontent that eerily predicted a dismal imbalance during Reagan’s Presidential tenure, following a turbulent 1960s. 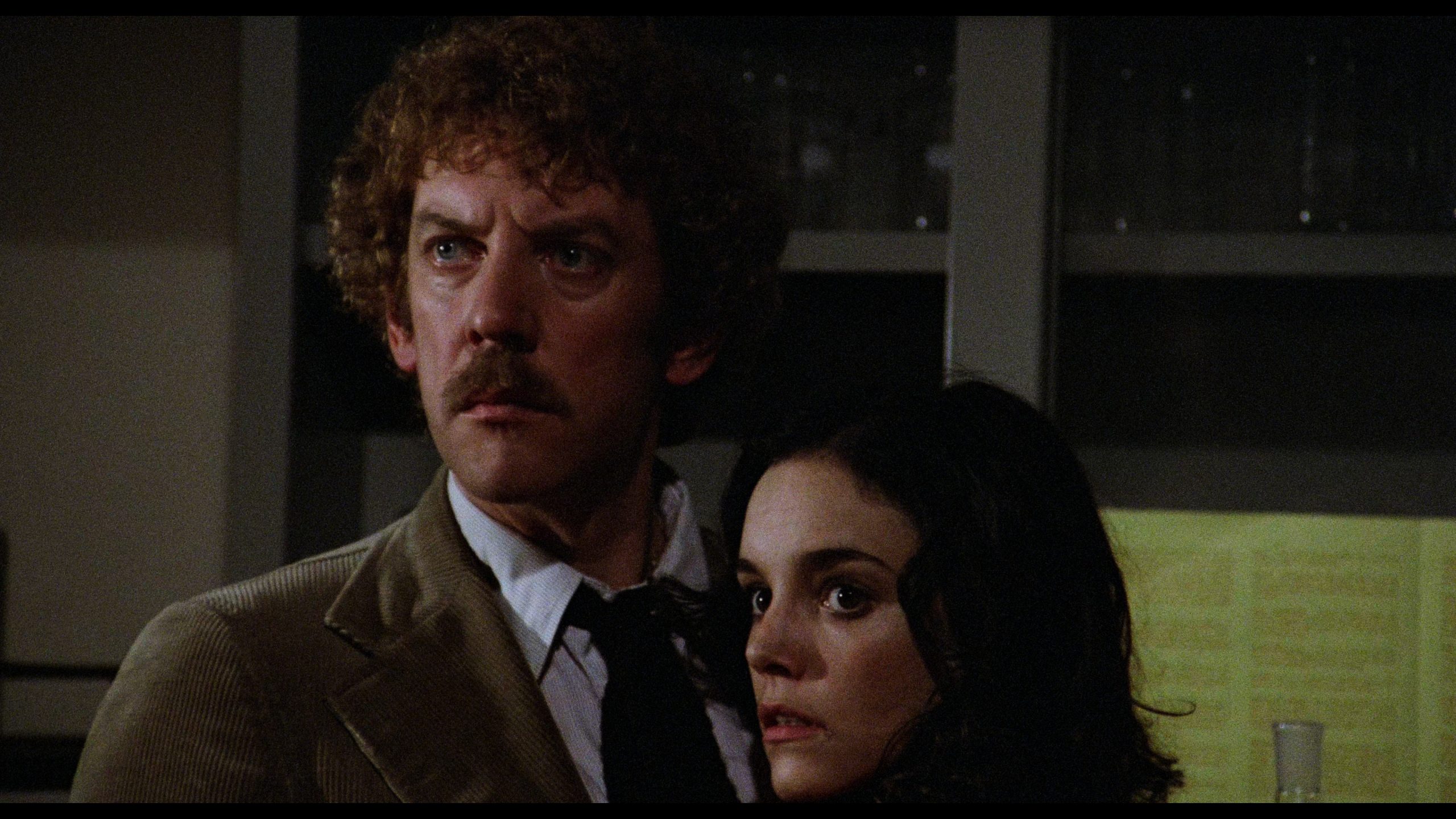 Kino’s disc makes Invasion of the Body Snatchers look out of time. Clarity and grain purity suggest something far newer than 1978. It’s gorgeous material, restored to perfection and encoded better still. The amount of disc space given to the film itself is a record-shattering (for a two hour movie) 81GB; it shows. Compression is wholly transparent.

Generous color saturation jumps even from the shadows. Primaries erupt, also helping avoid the usually dreary, gritty aesthetic from the decade. Wide shots in the city produce significant intensity in paint styles or bricks. Interiors then perform equally from the decor, flowers, or other objects. Flesh tones glow, but not overly so as to lose their natural hues.

In either stereo or remixed 5.1, DTS-HD brings enough clarity to a rougher source. Dialog maintains an analog coarseness, but rarely wavering. There’s enough boldness in the score to add a bit of depth, although bass is generally absent, even in the 5.1.

Directionality holds to the stereos, rarely using the surrounds for anything. Still, the wide front soundstage is given a decent workout, spreading the score outward.

On the UHD, director Philip Kaufman provides a solo commentary, and then historian Steve Haberman provides the second. Everything else is on the Blu-ray. Kino includes interviews with Brooke Adams, writer W.D. Richter, composer Denny Zeitlin, actor Art Hindle, and Jack Finney expert Jack Seabrook. Then come a trio of featurettes on sound, special effects, and cinematography. Plus, there’s a more broad making of that runs 16-minutes, followed by trailers.

Invasion of the Body Snatchers

Without dated Cold War parallels, Invasion of the Body Snatchers joins a number of better-than-the-originals 1950s remakes in a notable film cycle.