Guns of Navarone isn’t unusual or unorthodox among the post-WWII movie boon. Tales of small, mismatched squads given an impossible task, then trumping buffoonish Nazis easily excited audiences. The difference in Guns of Navarone is raw scale.

This is not an expedient story. The choice is to hammer star Gregory Peck and the men at his side with brutal conditions. Merely arriving at an isolated island to sabotage two German cannon emplacements takes nearly 30-minutes of screentime, and involves a sunken boat, hurricane-like weather, and a treacherous, unsteady mountainside climb. What results is tension, of course, but also scale. Guns of Navarone, although plotted almost entirely on an outlying island of minimal consequence, feels mammoth.

Rather than using tank barrages, assaults by ship or plane, Guns of Navarone shrinks the British squad to almost nothing against this backdrop. Success seems more unlikely than with hundreds of men charging forward (even though Peck’s stardom means a zero percent chance at failing). Small intrigue develops over a potential traitor, and a heated moral argument over an injured soldier who can no longer walk.

Peck expressed disappointment when viewers failed to see Guns of Navarone as an anti-war statement – but it’s not. Pertinent themes of loss and men forced into service come standard for the genre. If anything, Guns of Navarone glorifies combat through glossy production values and popular leading men. In 1961, violence only stretched so far on screen. It took decades for war’s horror to appear in full, and that came after Vietnam exposed truths the Guns of Navarones failed to show.

That’s not a failure on the screewriters or director J. Lee Thompson. Rather, Guns of Navarone came to be under certain circumstances, and even 15 years post-war, patriotism ran high. Studios only assigned these budgets for likely successes, of which this mix carried. Dry British humor, a proper level of angst, indiscernible Nazis, and heroism all joined together in this script, but still offering a distinctive take on formula. When the Nazis lose, elation ensues. That’s a sign Guns of Navarone worked, mostly because it takes the time necessary to do so. 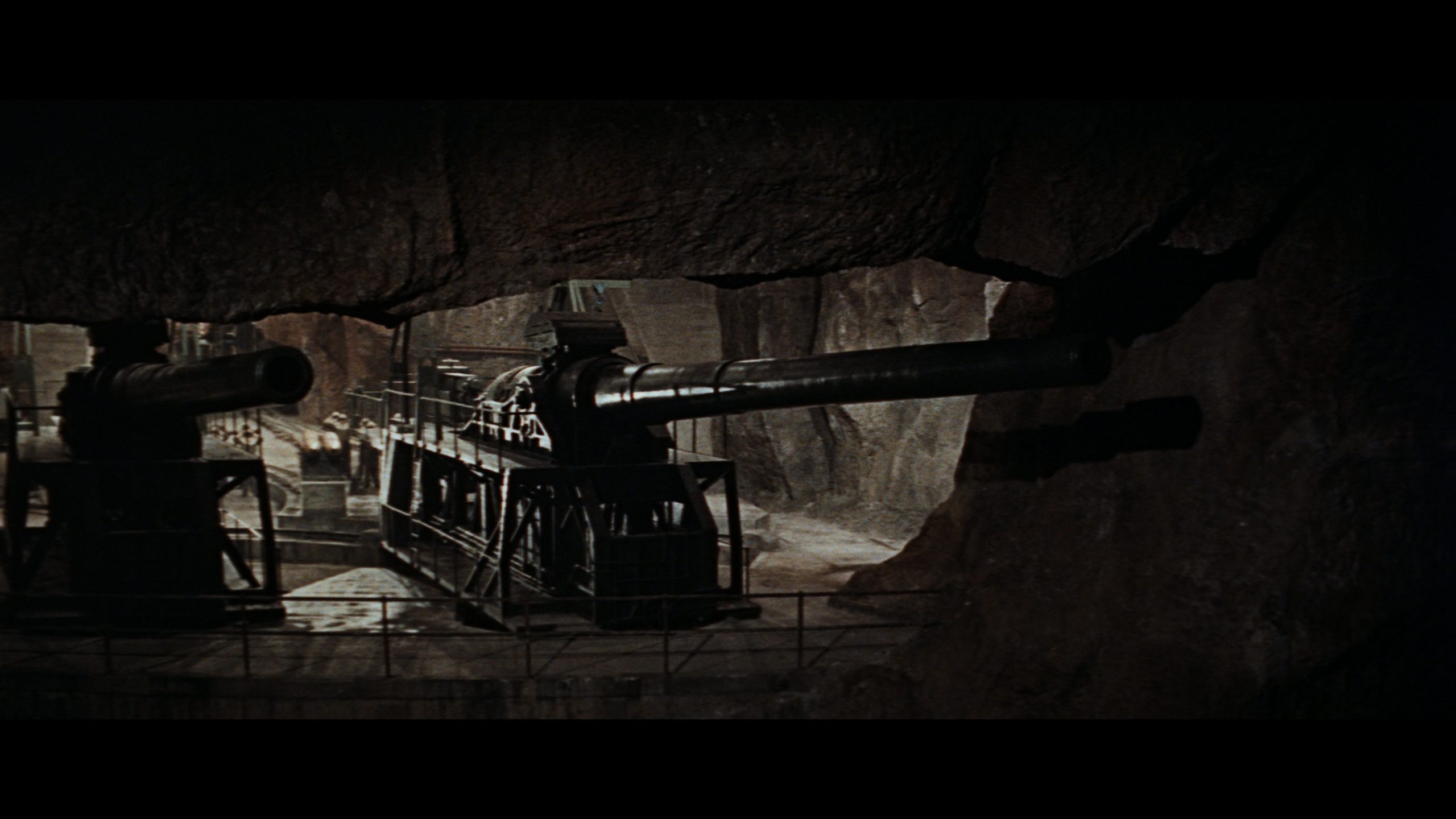 Marvelous work by Sony on this disc, who heads back into the mastering booth and produces a new 4K scan for this release. A stellar source shows no perceptible defects. The encode easily resolves a heavy grain structure minus any faults; it’s perfectly transparent to the film stock. This results in texture to an extreme. Facial definition stands out when in close, while the location scenery capably pulls out every brick and rock in the ruins.

Equally dense color provides flesh tones with a classic Hollywood orange glaze. Boldness rushes into all primaries. Color all around takes on new power. This ranks among Sony’s best catalog efforts in terms of color reproduction and contrast, right alongside Bridge of River Kwai (to at least draw an appropriate genre comparison).

Spread out into Atmos, this is an equally impressive upgrade. High ambiance around the islands fills the full soundstage with activity, whether wind or soft waves. This never comes across unnatural or added, but appropriately part of the original audio. Even motion into height channels sounds just as organic as planes sweep past or airfields keep active. A storm at sea is reference grade stuff as waves bounce between the speakers, helped along by howling winds.

Bass is almost ridiculous, as if super-powered, giving the massive cannons appropriate scale when they fire. Then come plane engines, pushing enough power to rattle walls. It’s surreal following the usual mono and 5.1 mixes that typically ignore bass to keep the mixes authentic. Sony’s recent skills here and in Anatomy of a Murder reveal a definite effort to change the norms around vintage audio, and as long as the untouched original remains available, so be it.

On the UHD, Sony includes a trailer and alternate opening titles. The Blu-ray contains the bulk, including a commentary with historian Stephen Rubin, and another with director J. Lee Thompson. A bulky dossier pop-up feature comes next. Five documentaries in varying lengths and six featurettes follow. There’s a narration-free prologue and message from producer Carl Foreman, shot for the film’s release.

Hopped up on wartime ambition and bravery, Guns of Navarone immortalizes British heroism in a glossy, expensive production.