The year is 1921 and Rudolph Valentino’s The Sheik sweeps the nation, becoming cinema’s first major sex symbol. The landmark silent film is a dashing romantic adventure for its era based on a popular novel. Long before Fifty Shades of Grey, Rudolph Valentino and his penetrating eyes became one of America’s biggest stars during the Roaring Twenties.

Taking advantage of his exotic looks for 1920s America, Rudolph Valentino stars as Arabian prince Ahmed Ben Hassan. The man becomes infatuated with fearless Englishwoman Lady Diana Mayo (Agnes Ayres) and wants her as his bride. Rejecting the conventions of her day, she marches off with a caravan into the desert with no male protector.

The fiercely independent Lady Diana is soon captured by the powerful Sheik’s minions and held captive against her will. He professes his love despite her many protests. The wildly popular box office smash sees Lady Diana eventually falling in love with her captor when outside forces separate her from the Sheik.

The Sheik is more historical curiosity than captivating romantic tale for today’s casual movie watchers. Its dated gender politics and sexual mores are quaint at best, following rigid conventions popular in the 1920s. Adapting a bestselling romance novel by Edith Maude Hull, some two-thirds of all American women had read it before the movie ever hit theaters. This is the performance that made Rudolph Valentino a silent film icon. Only five years later, the star would pass away at the heights of his fame.

Hollywood and filmmaking have come a long way since the days of silent films. The Sheik is an important marker in screen history, a box office sensation every bit as famous in its time as Titanic is today. It captures Valentino’s macho swagger and screen presence.

The raw entertainment value is mostly lost on today’s audiences. The art of cinema has progressed leaps and bounds since its debut over the last 100 years. The Sheik reminds everyone of the silver screen’s primitive beginnings with its ridiculously dated romance and hokey adventure plot. 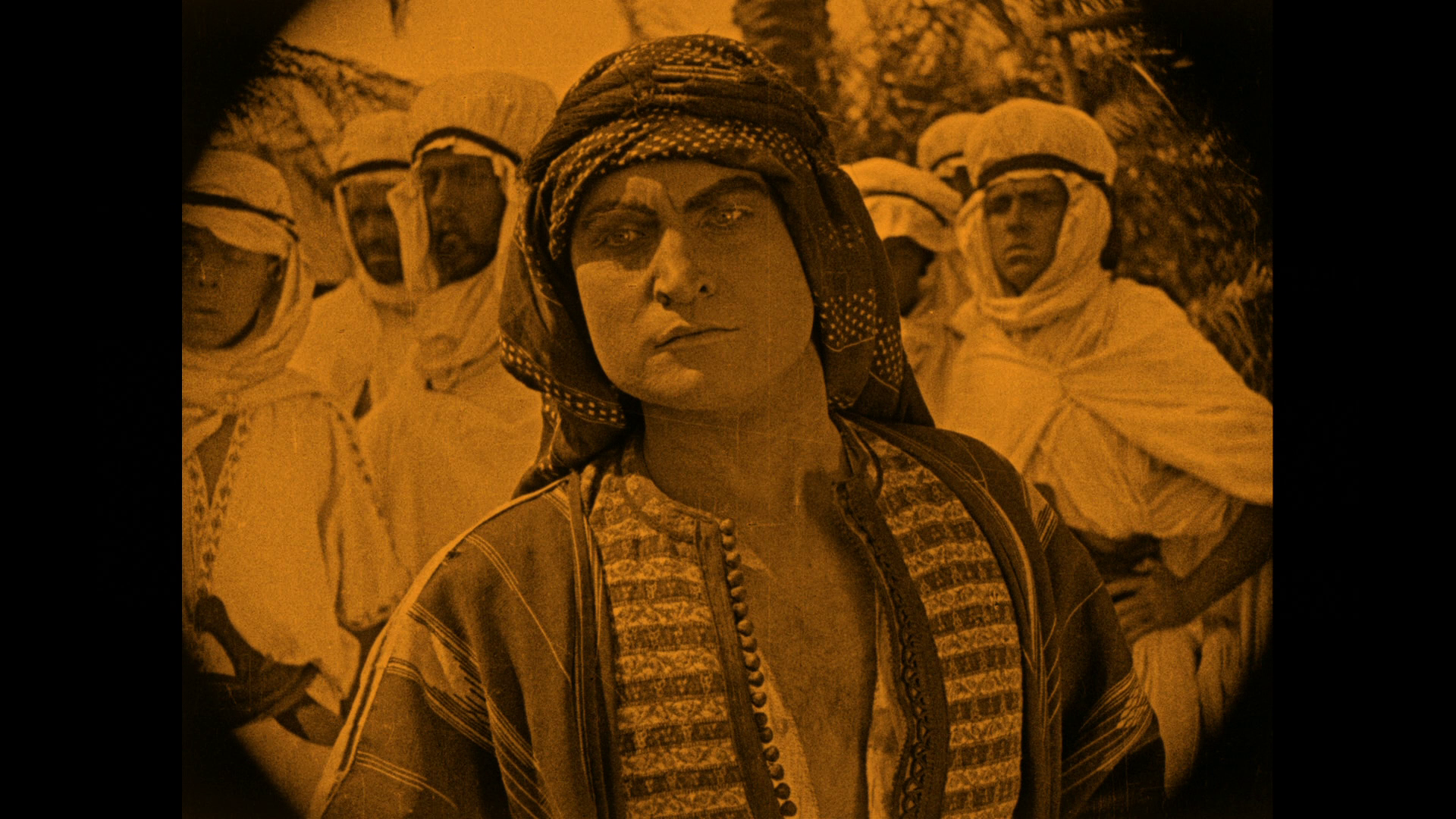 Following an original continuity script from Paramount’s archives as a guide, tints and tones have been digitally applied in this new 4K restoration. The 1.33:1 presentation reveals the major limitations often found in surviving silent films. Visible wear and hefty film degradation are regular occurrences. It’s difficult comparing the restoration efforts from such dilapidated sources to the impressive jobs performed on Hollywood classic struck from pristine negatives.

Paramount scoured the world’s archives for decent film elements and their efforts have produced modest benefits for the film’s picture quality. The Sheik’s presentation has serviceable black levels and acceptable definition given its age. The condition is somewhat erratic and varies depending on which element has been employed. Paramount has stabilized the frame rates in software.

One major issue here is that Paramount doesn’t even include the full motion picture – Image Entertainment put out a much longer 86-minute version on DVD nearly 20 years ago. Paramount’s Blu-ray runs 66 minutes. The video is certainly sharper and provides more definition than earlier releases, but the trade-off is losing small portions of the original movie.

Paramount isn’t even the first label issuing The Sheik on Blu-ray in Hi-Def. Kino Lorber beat them to the punch a few years ago, releasing a longer 73-minute version.

A new score with synthesizer undertones by Roger Mellon accompanies the silent film in 2.0 Dolby TrueHD. It’s a fairly lush instrumental recording. The stereo soundstage isn’t very wide and remains tightly centered. Mellon sets a dramatic and sometimes playful mood with musical flourishes. Silent film scoring is a field unto itself and Mellon takes a few creative liberties which mostly complements the action.

Optional French subtitles play in a white font for the occasional title cards.

The Sheik is #25 in the premium Paramount Presents line. Paramount isn’t the first studio tackling the movie on Blu-ray in North America. Kino Lorber put their own edition out back in 2017 with a different score, completely different special features, and even a longer running time. Hardcore fans will certainly want both editions but Paramount’s disc may not be your first choice.

As with all films released under the Paramount Presents banner, The Sheik is presented with collectible packaging featuring a foldout image of the film’s theatrical poster and an interior spread with key movie moments. It’s a deluxe slipcover with a glossy finish and thick card-stock.

A digital copy is included which redeems in HDX video quality on either VUDU or iTunes.

Desert Heat: 100 Years With The Sheik (12:21 in HD) – Professor Leslie Midkiff DeBauche discusses Rudolph Valentino’s career and appeal as a film star in this featurette. She breaks the movie down and how it was made from a popular romance novel.

The landmark silent film classic marked Rudolph Valentino’s rise as a box office star and reminds everyone how far the art of cinema and filmmaking have come in 100 years.