Draped in spikes and leather, madmen rove the deserted outback in their mangled cars, looking for fuel. As far as Road Warrior is concerned, they drive only to kill, and need gas only to kill again.

Road Warrior’s setting is apocalyptic, after war devastates civilization. That matters little. Unbeknownst to anyone, Road Warrior became a pertinent warning about a world addicted to oil, and its inability to break from that industry in time to stave off catastrophe.

The warning isn’t that humanity is certain to don leather chaps and bear stylish mohawks in the future (although the look defined a counter-culture punk movement throughout the 1980s). Rather, the alert is how cult-like our world’s dedication to a not-unlimited resource became. Road Warrior came into existence following an oil crisis in the early 1970s, a warning clearly ignored into a new millennium.

Consider the need for gas in Road Warrior is entirely self-defeating. They use gas to get gas to waste gas. It’s not as if their fuel use is to sustain their numbers hunting for food or water; neither is mentioned as critical. Instead, the goons feel superior in their ability to keep their tanks full as others suffer, trying to acclimate to a different normal. Road Warrior’s villains see no issue in their waste, recklessly killing one another, not unlike the continued fossil fuel burning today envelops the planet in toxins.

It’s a movie of chaos, fear, and brutality, plus a setting that established a drained, war/disaster torn world’s aesthetics. On film, stunt men perform stupidly dangerous moves, clinging to vehicles charging ahead full speed, then smashing into other makeshift cars that don’t merely explode, but shatter. For the climax, Road Warrior finds nearly 20-minutes of compelling, ridiculously perfect action, totally uninterrupted. The spectacle can’t be denied, part of that rare breed like the original Rambo that on its surface depicted masculine brawling, but underneath, exhibited brainy concepts usually lost in the gunfire.

While not as eccentric now, Road Warrior, in its day, was unlike anything else, as forceful in its slander against a macho car culture as it is fearful of the looming eventuality from a planet unable to shake a comfortable – if deadly – norm. It’s still dazzling to watch the pre-digital chases, knowing near all of it was done live, and now the storytelling carries even greater relevance. 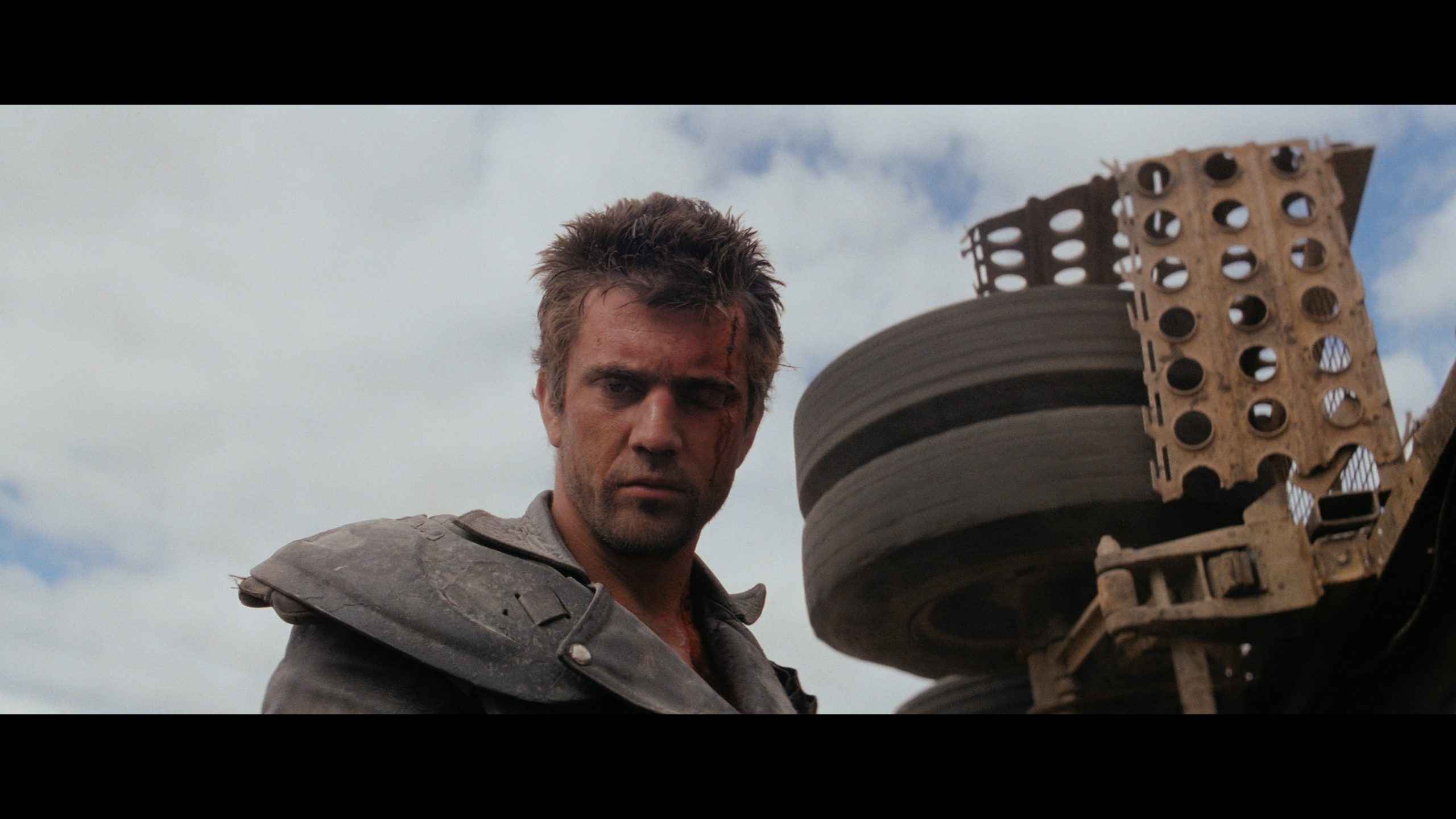 Dazzling, sensational work by Warner here. This unfiltered 4K master gives the best of this format in all ways, beginning with ridiculous sharpness. Desolate landscapes create mammoth definition, unobstructed by the encode that easily handles the minimal grain structure. Texture thrives, resolving high-frequency details in close, picking up not only facial definition, but the grains of sand covering the leather costumes. Other than source anomalies, it’s perfect.

A new Dolby Atmos mix causes a few misfires, all of them caused by fresh sound effects dropped into the track. They stick out during the action scenes, where car wrecks bring far more fidelity than the rest. Those metal clashes run overly crisp, and clearly do not belong. This is especially true against the dialog. It’s overly worn and scratchy, at times nearly lost entirely by distortion. Oddly, the score sounds perfect in comparison.

If there’s a plus, the Atmos mix creates a capable, widely spaced, and dynamic soundstage, albeit with a habit of overwhelming sound effects via the score. The trade off comes from tight low-end pumping from car engines (also audibly “new”), precise imaging, and even overhead flourishes if vehicles flip past the camera, a boomerang whipping by, or the gyrocopter. Fun, if impure, and in need of a do-over.

An older introduction by Leonard Maltin is followed by a commentary from George Miller and his cinematographer Dean Semler. The final extra is a 48-minute making of, and it’s a fantastic look back at the production.

Defining an entire punk era, Road Warrior also envisioned a world stuck in a cult due to their addiction to oil that’s more prescient in each passing day.