There’s immense joy in watching a new generation of nerdy kids strap on proton packs and fight the same villains their parents knew well. It’s more than nostalgia – mostly – but a measured attempt to bridge ‘80s kids and their kids, which Ghostbusters: Afterlife then uses as the onus for its story.

It’s clumsy in spots. Clunky too. Through a brisk opening act, Ghostbusters: Afterlife feels cut to essentials only, albeit smartly. There’s time to appreciate Phoebe’s (Mckenna Grace) intellectual awkwardness as protagonist, immediately connecting her to her famed grandfather, with enough personality to make this character her own. 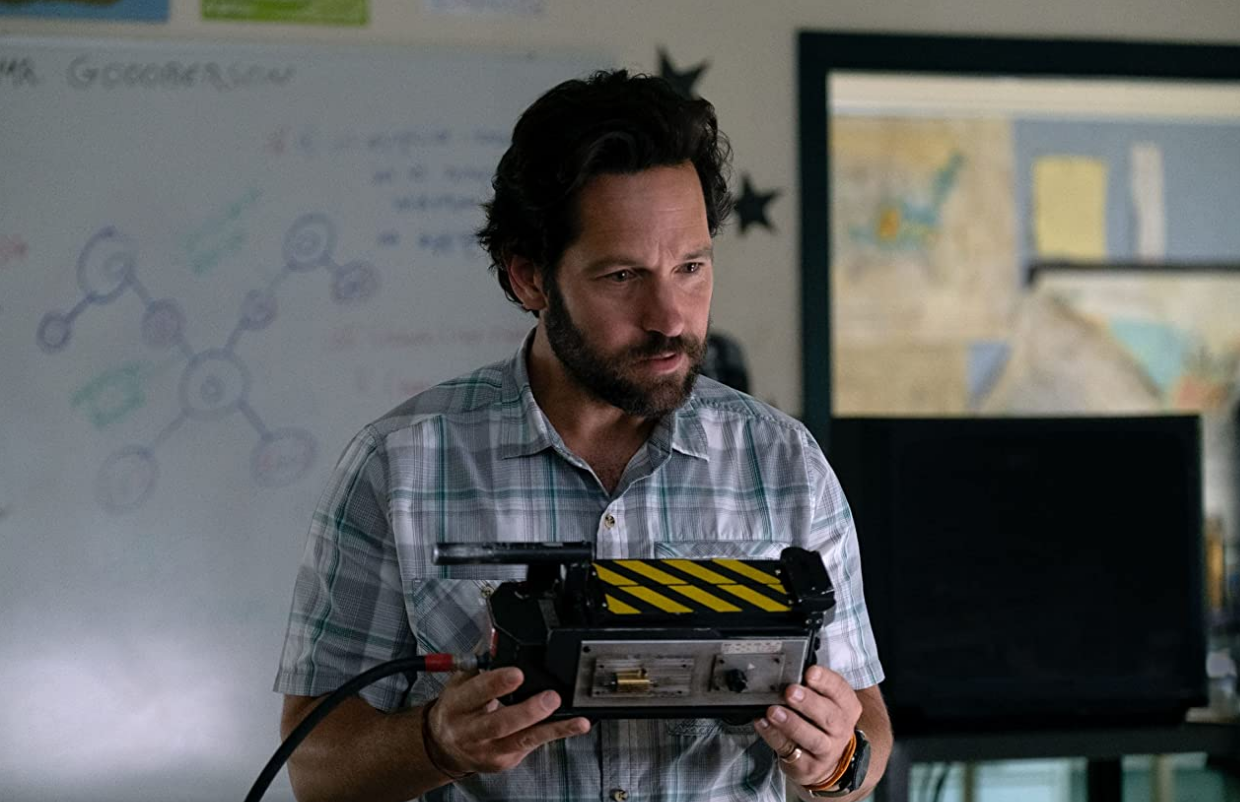 Being focused on children, Ghostbusters: Afterlife can’t continue Ghostbusters‘ Reagan-era economic satire or, obviously, the sly sexual tension. The method then is to lean into a mainstream appeal, mimicking the successes of Super 8 by brandishing Spielberg-ian adventure through small town America. Shameless, but successful, and entirely appropriate for a franchise born during similar pop culture mania.

More than proton streams, ghost traps, and Gozer, this is visually, cautiously, and audibly Ghostbusters

As such, Ghostbusters: Afterlife isn’t a lasting commentary on the country’s various quirks, as seen through the eyes of slick salesman. Instead, it’s imbued with family drama, teenage social discomfort, and a stern pro-science stance in the face of supernatural invasion.

Ghostbusters: Afterlife climaxes on events that mirror the 1984 original, to a fault even. A stiff nostalgia jolt doesn’t carry any nuance or natural grace; Ghostbusters: Afterlife clearly aims at crowd-pleasing formalities above all. To discredit the rest though based on a typical, big studio series hand-off ignores the careful comedic flair, giving this sequel a distinct wit, while still relying on a smartly embedded bookishness. More than proton streams, ghost traps, and Gozer, this is visually, cautiously, and audibly Ghostbusters, just in its disparate way.

In doing so, there’s room to develop sequels exploring the financial satire of the predecessors, and in the perspective of kids aging into lesser fiscal security. That’s for later though, and instead, Ghostbusters: Afterlife can embrace the garage kit, Radio Shack-born electronic hobbyist culture that’s faded in a time when over-designed, over-marketed, and under-built corporate products draw public attention. Phoebe, mostly on the back of Grace’s stellar performance, embraces her skill set thanks to others embracing her. Egon, Stantz, Venkman, and Zeddmore were oddball outcasts, the bullied and rejected in the ’80s. Times changed. Now their kin are the ones celebrated.

If Ghostbusters inspired a decade enraptured by capitalist startups and shrewd company men, then Ghostbusters: Afterlife mourns the loss in that transition. So few people just make stuff anymore, short of websites or apps. There’s no personality in physical things. Through subtle changes, Phoebe and her team reevaluate iconic props. Changing them, slightly, even making them better, if still conforming to the sloppy, by-hand method that made proton packs a cinema icon. Finally, and appropriately, it’s original writer/director Ivan Reitman’s own son Jason making sure they’ll sustain that appeal through another era in the director’s seat.

Yes, it’s forcing nostalgia, but Ghostbusters: Afterlife is careful to appreciate why that nostalgia exists in the first place.