Respect is a richly rewarding biopic of singer Aretha Franklin, a music legend who first rose to fame in the turbulent 1960s. Hitting all the right notes, Jennifer Hudson plays the African-American icon to harmonic perfection as she smoothly embodies the Queen of Soul. Co-star Forest Whitaker contributes an excellent performance as Aretha’s controlling father alongside an all-star ensemble featuring names such as Mary J. Blige and Marlon Wayans.

The only road bump is Respect’s tendency whitewashing events in Aretha Franklin’s life. Warmly crafted by director Liesl Tommy, the biopic occasionally becomes a hagiography. Aimed at her many fans, Respect mostly becomes an appreciation of the singer’s life and legacy. The narrative almost always elevates Aretha Franklin’s legacy at the expense of her family and associates, sometimes for drama, sometimes to paper over problems like two pregnancies before the age of fifteen.

Respect is a well-made prestige picture which honors the great Aretha Franklin’s life and career.

Respect is a fine biopic propelled by Jennifer Hudson belting out a few of Aretha Franklin’s most beloved hits. Some of its best moments capture Franklin taking charge in her career, over the objections of the men in her life. The scenes of Aretha recording in the legendary studios of Muscle Shoals are electrifying. Music fans will find Respect an intimate, involving watch worth the time.

Covering Aretha’s life from her early days singing in her father’s church, then fighting racism and segregation following Martin Luther King Jr., Respect hits its stride around 1960 as she signs with Columbia Records.

Marlon Wayans plays Ted White, a manager who ends up in a relationship with Aretha over the wishes of her father. Known more for his comedy, Wayans in this role sticks out as a less-than-ideal choice. Forest Whitaker’s portrayal of Aretha’s domineering father shines in Respect and should earn him award nominations.

Made in the epic mold of Lady Sings The Blues, Respect drags a little as its third hour begins. The Oscar winner provides a basic blueprint for Respect and some of its beats certainly inform the new film. One nice touch is Respect’s big finish – actual video of Aretha Franklin herself singing “(You Make Me Feel Like) A Natural Woman” from a 2015 Kennedy Center Honors performance.

Respect is a well-made prestige picture which honors the great Aretha Franklin’s life and career. Jennifer Hudson gives a commanding performance in perfect Hollywood casting. Music fans should enjoy Respect and its tribute to a legend. 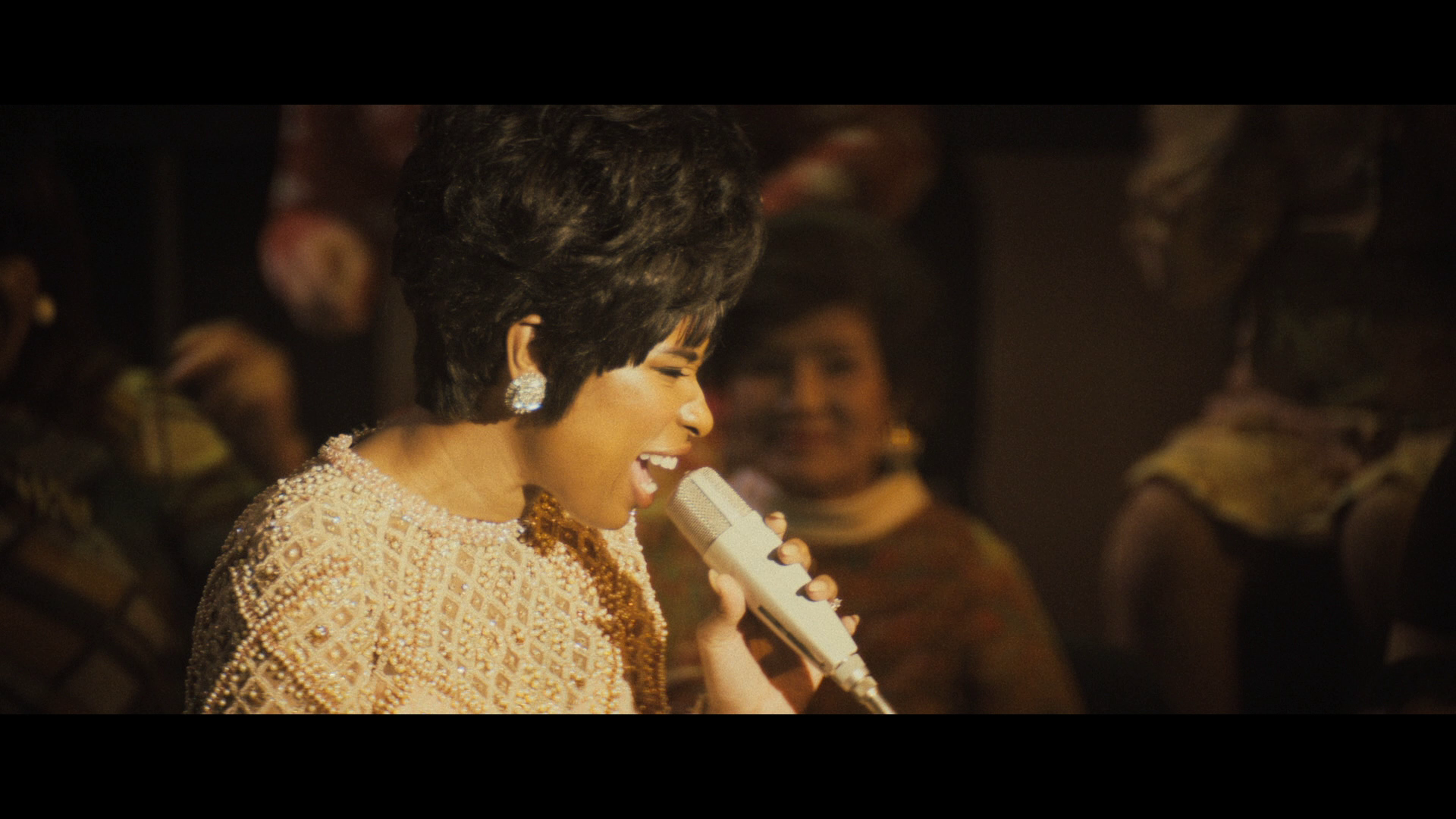 Universal gives Respect a technically sound transfer on Blu-ray which replicates the source material but it’s now more understandable why Respect was skipped for UHD. The 2.39:1 presentation features decidedly gritty cinematography and a muted palette. It’s a most unusual color correction designed for the period setting, moving from the 1950s through the 1970s. There are no significant contrast problems and steady black levels deliver fine shadow delineation.

Respect is rather soft with average definition, especially for a new big-budget flick from Hollywood. Clarity is respectable. Its palette is mostly lackluster, eschewing heavily saturated primary colors. Flesh-tones are about the only “natural” colors in Respect. The cinematography is flatter and more film-like than most new movies.

Respect runs a lengthy 144 minutes on a BD-50. The AVC encode nicely captures the moody aesthetic without compression issues. The transfer is unfiltered with no signs of deleterious processing.

Hardcore videophiles should be aware MGM skipped issuing Respect on UHD. It is available in 4K on most streaming services.

The movie has wonderfully dense Dolby Atmos audio with an engaging surround mix. Wide channel separation enhances its discrete nature with pinpoint clarity. Firm, precise and commanding, the mix is fairly conservative for a new Atmos mix with music as its primary focus. Height channels are rarely used for anything more than ambient noise and minor cues.

The soundstage is wide and impressive, creating a realistic atmosphere for Hudson’s vocal talent in different settings. From the concert stage to Aretha’s Gospel singing in church, there is fantastic depth and presence for the score and song music.

Aretha Franklin’s greatest hits bloom as Jennifer Hudson steps up to the daunting task of singing songs like “Respect” and “Do Right Man, Do Right Woman.” Immaculately recorded, the dialogue is completely intelligible within the bigger dynamic swells.

The MGM film is being distributed by Universal on home video, so Respect’s Blu-ray combo package falls right in line with Universal’s regular output in most ways. The two-disc combo set includes BD and DVD versions of the film. MGM unfortunately isn’t a part of Movies Anywhere, the included digital copy only redeems on iTunes and doesn’t port to other providers.

A slightly embossed slipcover is available for early pressings. Target’s “exclusive” Blu-ray has different cover art as its only difference from the regular retail edition.

Becoming Aretha Featurette (04:42 in HD) – Jennifer Hudson discusses how she always dreamed of playing Aretha and receiving the legend’s blessing for the role before she passed away.

Exploring The Design of Respect Featurette (03:37 in HD)

A lively and engaging biopic featuring a capable Jennifer Hudson as the Queen of Soul.