The first Underworld told Rise of the Lycans’ story in expository flashbacks, albeit briefly. Stretching that to feature length is particularly useless, even if Bill Nighy’s gloriously sadistic performance as head vampire Viktor makes this prequel worthwhile.

On its own, Rise of the Lycans plainly tells a mythological, medieval slave saga as super werewolf Lucian (Michael Sheen) brings the clans together against the blood-sucking ruling class. It’s a bit satirical, presenting the wealthy as undead demons, feasting on the poor, making the werewolves heroes who quite literally eat the rich. Rise of the Lycans doesn’t lean into the classism satire unfortunately, squeezing in a ponderous inter-species romance and one point, forcing Sheen to deliver a rousing speech akin to Braveheart.

What’s left is familiar, brutal swordplay, decorated by blood, if the only Underworld entry given a reprieve from the blatantly sexist, leering camera that usually surrounds Kate Beckinsale. Rhona Mitra serves as Beckinsale’s replacement, and while relegated to sexual fodder for Lucian (plus a half-nude scene), Mitra survives her one trek through the franchise mostly unscathed by a camera afflicted by the male gaze.

Rise of the Lycans thus takes on a notably masculine, buff tone. With no apparent exceptions, the war is fought entirely by men aside from Mitra’s handful of kills. For a series that embraced the new millennium’s call for feminine action stars, Rise of the Lycans ignores that element almost in total. As such, the look, the vibe, and style mimics that of countless other sword-clashing warfare sagas.

Everything relies on Nighy, whose contact-imbued, blindingly blue eyes pierce through the screen. One look and his evil is defined, and Rise of the Lycans will make full use of his camera-staring talents, to a point of repetition. Yet, Nighy goes all-in, clearly having fun as this repugnant slave owner, and a perfectly simplified antagonist for a dopey action movie like this.

Given the entries that followed, the notable trait for Rise of the Lycans is the timeline, meaning no assault rifles or shotguns. Choreography demands more from its cast, even if the aggressive editing hides their fluidity. Plus, the guiding hand of first (and so far only) time director/special effects guru Patrick Tatopoulos allows the physical werewolf suits ample screentime; those hold up unlike the withering digital counterparts. 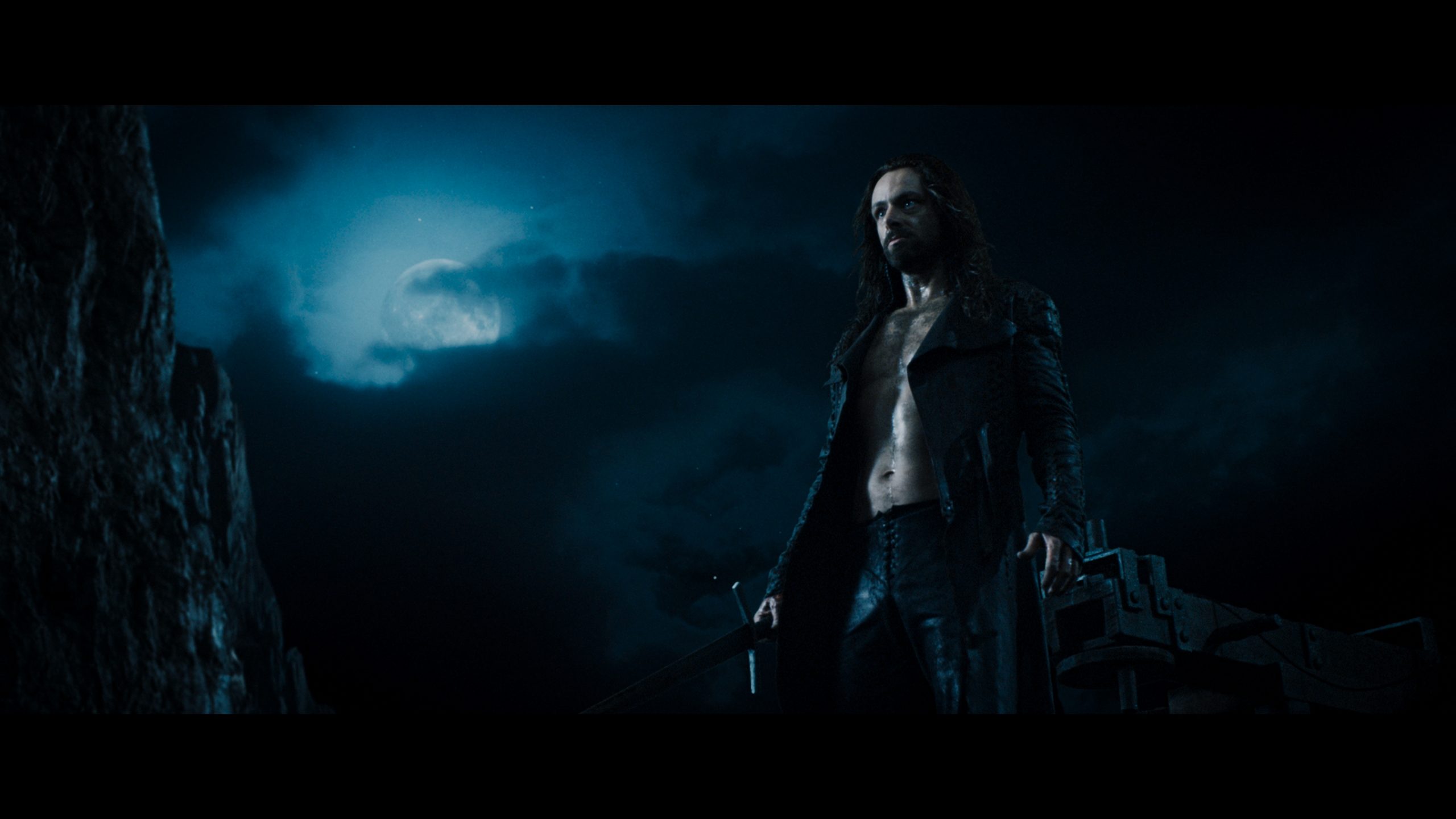 Although a 2K finish, the visible resolution is substantial. While much is hidden by shadows, detail in wide shots and exteriors (even those filled in with CG elements) look wonderfully bold. Mud and stone texture flourishes, and then when the camera pulls in close, things improve further. Skin, armor, and costumes produce substantial fidelity, better than an upscale usually presents.

Rise of the Lycans remains flush in blues, keeping the franchise aesthetic intact. Everything is blue short of flames and pale flesh tones (if the term flesh tones even applies). Colorful this is not. Oppressive? That it is.

While still punishingly dark by design, crush is less of an issue in this prequel than the two prior Underworlds. Black levels sustain incredible density throughout, if delicate enough to keep details visible until hitting pure black. HDR brings the limited contrast to life, accentuating moonlit reflections to an extreme, certainly brighter than any nighttime reflections should be, if still attractive in utilizing the format. Flames from candles also provide a break from the dark.

Another subwoofer killer, bass pounds in the soundtrack, then grows stronger when action spins up. Arrows pierce flesh with a meaty bump. Punches connect, rattling the room. Absurd range requires a decent setup to truly appreciate, but it’s worth it as to feel each blow.

Remixed into Atmos, the change isn’t dramatic, if mostly due to how fantastic the original track was. Overhead channels do matter though as werewolves leap above victims, and at one point, pounce on a horse drawn carriage, stomping on the roof. Sword clashes and arrows sweep around the soundstage, impeccably placed. Every bit of motion is flawless. Outside of action, ambiance when in slave camps keeps chains clanking in the rears. It’s consistent. The only misgiving is the score – that prefers to hug the right side, and it’s far too obvious.

Other than one featurette, extras reside on the Blu-ray entirely. A commentary from director Patrick Tatopoulos, writer Len Wiseman, and producers James McQuaide, Richard Wright, and Gary Lucchesi is the first of a brief selection of bonus features. A picture-in-picture mode allows the viewer to see various art and interviews. These clips are not available anywhere else on the disc.

Three featurettes run 42-minutes total, delivering the usual self-praise about the work. There’s little of interest here, although the feature on the film’s look is mildly enjoyable, explaining how Tatopoulos wouldn’t deviate from the style set by the other films. A Lycanthrope interactive map details various werewolf sightings over the course of 5,000 years.

Underworld: Rise of the Lycans

Slaves and uprisings fill in Underworld’s lore somewhat needlessly, but Rise of the Lycans offers enough satisfying action to earn its keep.