Having already become something of an international screen icon for Roman Holiday, Audrey Hepburn captivated audiences once again in Sabrina. The winning romance helped establish her immense box office popularity in the 1950s. Playing off her much older co-stars Humphrey Bogart and William Holden with beauty, grace and unmatched elegance, Hepburn carries Billy Wilder’s lighthearted film. The master director and its three Hollywood stars overcome an underwhelming screenplay for a major romantic triumph. Sabrina earned itself six Oscar nominations.

Paramount’s second choice for the role after Cary Grant, Bogart’s large age difference with Hepburn stands out as the movie’s primary sticking point. The original Sabrina endures as a timeless romantic classic, even receiving a remake starring Harrison Ford back in the 1990s. Modern audiences may quibble with how the romance develops but its genuinely earnest love story still resonates across time.

Audrey Hepburn is a delightful ingenue in Sabrina…

Patterned after Cinderella, Sabrina’s story is a simple affair which laid the groundwork afterwards for many romantic comedies. Sprinkling in a light satire of high society and fueled by the combative screen chemistry between its three major stars, Wilder’s film cheerfully depicts the unconventional romance while providing laughs and real character depth. Audrey Hepburn is a delightful ingenue in Sabrina, matching screen legend Humphrey Bogart’s mellow businessman.

The simple daughter of a British chauffeur raised on the wealthy Larrabee family’s Long Island estate, Sabrina (Audrey Hepburn) returns from Paris schooling a refined woman. Growing up she was madly in love with David (William Holden), the playboy son of the Larrabee family. Now a beguiling damsel who has transformed into a fashion darling, David finally takes notice of the young Sabrina. The catch is David has recently become engaged, pushed into it by his older brother Linus (Bogart) for the family’s business.

Fearing Sabrina’s presence will threaten David’s impending marriage, a critical necessity for the family’s corporate empire, Linus begins falsely courting Sabrina as a distraction from David. As Linus and Sabrina start spending time together on dates, feelings develop between them. Their burgeoning romance throws an unexpected wrench into the scheme by Linus. He never anticipated Sabrina would fall for him.

Billy Wilder smartly showcases the charming performance by Audrey Hepburn which drives Sabrina. The three co-stars work in spite of the vast age differences, almost adding an extra layer to the romance which may have been lacking with a younger star in Bogart’s role. One of Bogart’s last major films, he never overplays his hand and allows Hepburn room to work her magic on screen. Sabrina would permanently cement Audrey Hepburn as a film icon and help propel her career over the next decade. 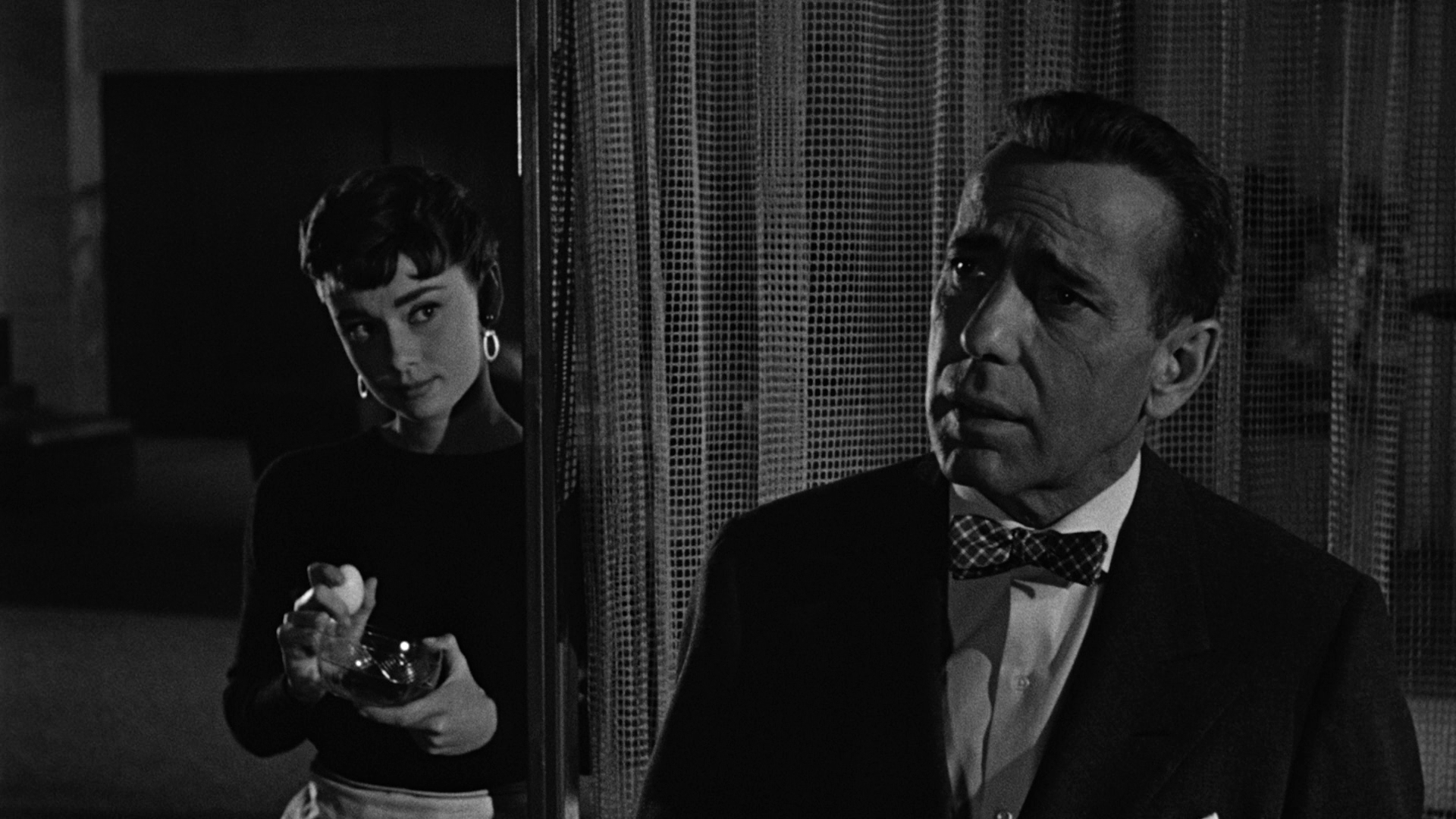 Re-released as part of the Audrey Hepburn 7-Movie Collection, seen here is the same middling transfer Paramount provided WB for their 2014 Blu-ray. The black-and-white cinematography was nominated for an Academy Award and is preserved here in a decidedly average 1.78:1 presentation. The film elements are in passable condition with decent shadow delineation and few signs of general wear.

Struck before 4K film scans were common, detail and definition fare better than DVD but worse than expected for such a well-known classic. Bigger problems include ringing in several scenes. Grain reproduction is fairly normal but lackluster. This is not one of Paramount’s better catalog transfers on BD and I hope Sabrina is fully restored one day on UHD.

Spread out over a full BD-50, the AVC encode is free of artifacts and crisply captures the 1080p video. Fans will find Sabrina’s picture quality perfectly acceptable but underwhelming. The camera negative cries out for a lavish new scan without processing.

Sabrina’s 2.0 DTS-HD MA audio reproduces the original monaural soundtrack in serviceable quality but keep your expectations in check. The 1954 recording has limitations with limited dynamic range. There’s a thin top-end and little from the bottom.

Dialogue is cleanly intelligible. The musical score with light orchestral music has a fine mid-range and adequate fidelity. A hint of harsher frequencies and minor crackles are evident.

Sabrina is re-released on Blu-ray as part of Paramount’s Audrey Hepburn 7-Movie Collection. The eight-disc collection includes War and Peace, Roman Holiday, Paris When It Sizzles, My Fair Lady, Funny Face, and Breakfast At Tiffany’s. If you already own the prior Sabrina Blu-ray, this disc is merely a clone with the same content and transfer.

Paramount provides a separate digital copy for every movie in the 7-Movie Collection. Each digital copy redeems in HDX quality on either VUDU or iTunes. It should be noted that Paramount isn’t part of Movies Anywhere, so the digital copy doesn’t port to other providers.

It’s a nice assortment of special features brought over from Paramount’s Centennial Collection DVD. There’s nothing new added for this reissue.

Behind The Gates: Cameras featurette (05:11 in SD)

A winning Hollywood romance from the 50s as star Audrey Hepburn proves Roman Holiday was no fluke, captivating audiences while firmly becoming an immortal screen icon alongside co-star Humphrey Bogart.