What made Don’t Breathe engaging was the twisting morality within a grim vigilante scenario. The sequel is less obtuse, more direct in making The Blind Man (Stephen Lang) a definitively righteous defender of the unfortunate.

Don’t Breathe 2’s script pontificates about being the superior person, using ghetto-stuck meth dealers as villains, and without any greater social context. Like the first, Don’t Breathe 2 stays contained and small scale; without ambiguity, the faults – or just the banality – in the story’s concept lead to nothing other than a forgettable thriller.

At the outset, the dialog teases something grander. Lang, speaking to a child under his care, rejects the idea God is bad. “God is fair,” he replies, suggesting The Blind Man found peace with his actions and that a higher power dictated those choices. It’s not long after when the bloodshed commences and with it, an utterly routine cat/mouse chase through a home’s hallways. The genre reversal, where the murdering slasher is actually saving someone through their actions, can only generate a limited spark. Afterward, the tricks become familiar, even routine – e.g., grabbing someone through a window, or shifting through shadows to find a kill.

It’s possible there’s a better movie waiting in a follow-up, assuming there is a third. The Blind Man spends much of the film trying to shield his adopted daughter from terror and violence. By the end, she’s seen men burned alive, stabbed others with garden tools, and even lopped off someone’s hand in desperation. An angle involving the girl’s parents isn’t delivered with any genuine emotion, just raw shock value. That’s a miss, and Don’t Breathe 2’s momentum lies entirely on providing copycat material from the first movie to maintain the box office draw (meaning Stephen Lang offing people on the regular).

The hollow plotting uses illegal organ transplants as filler for the final act. Or rather, it’s reason to initiate the climax, before dropping the idea all together and some perpetrators fleeing without comeuppance. Don’t Breathe 2 isn’t wholly merit-less as a generalized, violent chase flick. It’s competent (and confident) in its tension. The shock value is there, the jump scares properly placed, and usually, Don’t Breathe 2 stays patient to build up to the slaughter rather than exploit it. As such, a mild success given how needless the project was in the first place. 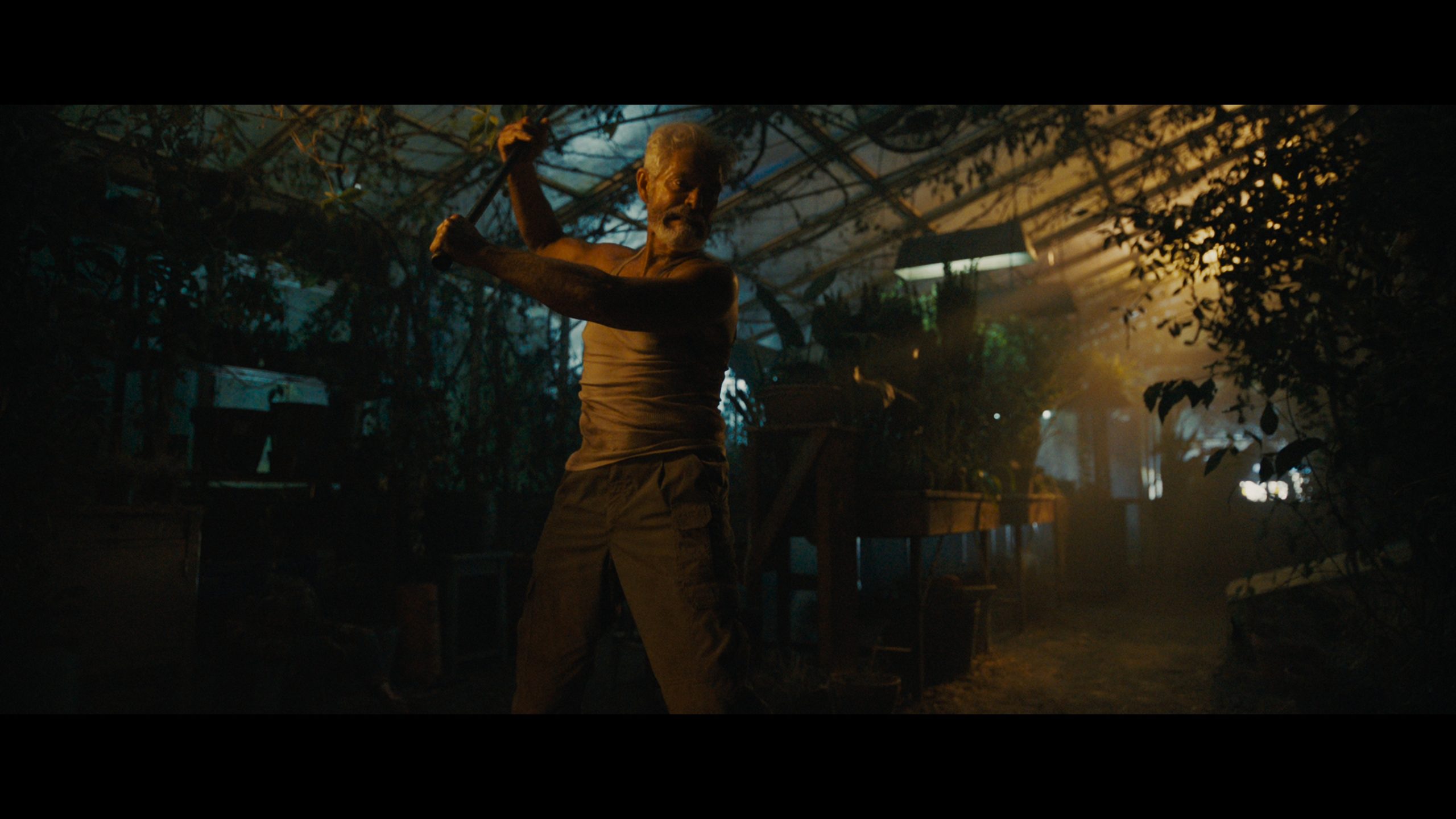 Taking on a heavily reserved, cold-focused palette, the drained color doesn’t have have much to show. However, the deep color does make an impact, giving the litany of dense blues some pop. Flesh tones never reach anything other than flat and pale. An occasional scene takes the uglier yellow-ish amber to extremes, mostly at night to simulate street lights filtering into the scene.

As a 2K source, Don’t Breathe 2’s upscale is clean enough to preserve detail organically. While by no means comparable to true 4K material, there’s enough fidelity and texture to make a difference when compared to an HD version. While predominantly low light in style, focused highlights bring out dynamic qualities in the imagery. It’s crisp, and a persistent artificial grain structure only suffers in rare moments, usually in darker areas, so not unusual.

Black levels matter more than most. Don’t Breathe 2 involves light sources only as absolutely needed. While lapses happen, they’re infrequent, and the majority stands firm. Even in the lowest light, there’s variance to the hues. Pure black faultlessly merges with lighter tones, and as such, that appears more natural and nuanced. On the flipside, contrast doesn’t have much on offer away from a few day time scenes and flames. Where possible, brightness hits a respectable peak, especially fire. Against black levels like this, it’d be difficult not to.

Wildly fun sound design pays constant attention to spacing, playing frequent tricks. Amid total silence, Phoenix hears a man walk upstairs directly overhead as she hides under them. Footsteps echo between the speakers, splitting the fronts as much as the rears. Directionality runs at a constant level, and always with absolute precision. Action scenes spare nothing, and make for a dynamic break from the otherwise tense atmosphere.

Equally superb, low-end force sees opportunity in the score as much as from gunshots, physical blows, or other elements. Range is exemplary, potent, and satisfying. For such a small scale story, the Atmos mix suggests something far larger. An explosion pushes enough bass to shake an entire theater room.

Sony only includes a UHD, so the extras reside there. Mostly, it’s promo junk, just short featurettes on the crew, characters, the set design. However, there are two commentaries and that’s interesting. The first is Rodo Sayagues in English, and the second is a totally different track in Spanish (subtitled), joining Sayagues, Fede Alvarez, and Pedro Luque. There’s an extended ending.

Unnecessary as it is, Don’t Breathe 2 finds a marginally interesting angle in a so-so attempt to build a franchise.