No one involved knew as much when Scream was in production, but Scream could only exist at that exact moment. It’s a tribute to VHS horror, a medium and media soon to meet its end as the digital era dawned. The generation groomed on those tapes laughed at the nonsense they once found terrifying; Scream played to their fandom. Partly, Scream invented cinema’s meme-ification, congratulating those capable of picking out the tropes and cues common to horror flicks.

Scream’s rebellious. That’s important. Teens of the ‘90s were groomed by counter-culture, MTV, and grunge. Scream represented them, recognizing – even accepting – a greater media intelligence than their parents. In only a few years, the fun ended. After an attack the previous night, deputy Dewey (David Arquette) tells heroine Sidney (Neve Campbell), “It’s school. You’ll be safe here.” The innocence of slasher movies faded when real world horror invaded such spaces, and regularly too.

Also, Scream is successful on its own terms. Wes Craven’s experience and Kevin Williamson’s script conjoin for an earnest, instant fan favorite classic. It’s expertly crafted from the opening frames that see Drew Barrymore accosted over the phone, and a slow drip horror building from a seemingly benign wrong number. Then come the tricks and distractions, Scream turning into a mystery, but critically, with actual characters. Most exist as stock tropes, but break from those roles to create personalities, some bold, some quaint. It’s all balanced.

In many slashers, it never matters who the killer is. The shock and/or surprise reveal draws out the suspense. But not Scream. Sidney’s reserved heroism shows maturation in this genre, dealing with fallout from prior death, in this case Sidney’s mother. Killing exists to gross out or scare, but so rarely has consequence. Scream’s opener doesn’t either – until Sidney begins to realize she’s stuck reliving a tragedy.

Scream has levels; that’s the key separator. It’s as much a slasher throwback as it is a sensible take on trauma. It plays to an audience’s wants as much as conveys the isolated, small town awkwardness. It’s funny, it’s self-referential, it’s creepy. Scream exists as a love letter to all horror for horror people, but Scream is unwilling to ceaselessly parody tropes or cliches. Scream chooses to deepen something so often inane, and the impeccable timing allowed it to be a cultural touchstone. 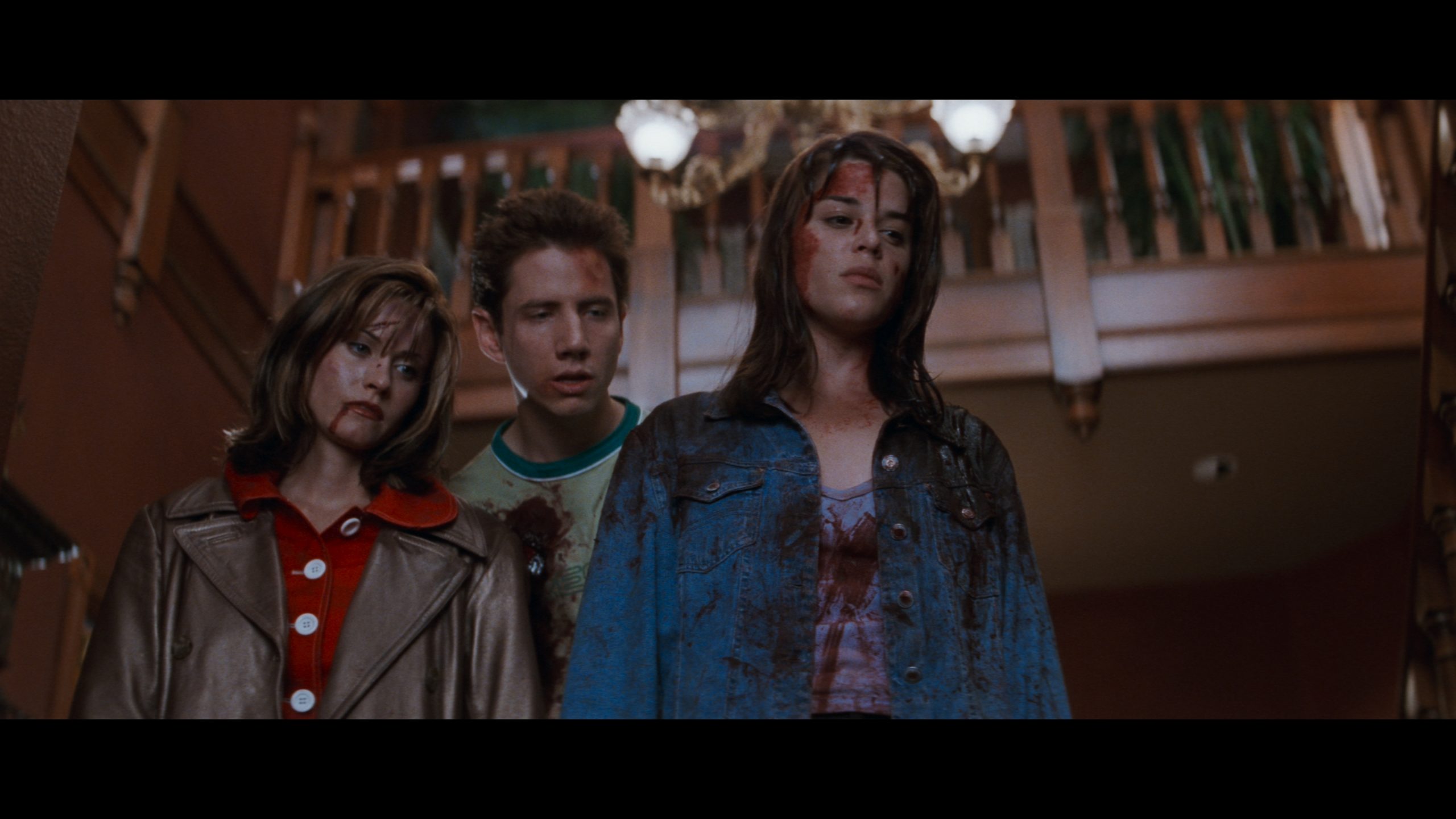 This looks… fine. Scream does not show the traits of a new 4K scan, although compared to the messy Blu-ray, it’s better. This transfer looks like film, cleanly preserving the fine grain structure. All signs of sharpening and edge enhancement are gone too. It’s the resolution lacking punch, leaving Scream softened, only moderately defined, and detail follows suit. Texture pops only in close, if still only average.

Minor enhancements to contrast brighten the early scenes before things take a turn for the main characters. Peak highlights reach a reasonable potency, if less than other discs. The HDR pass stays reserved, amplifying but not exaggerating. Black levels do okay too, holding up as needed, but only on occasion hitting the deepest depth. Scream’s transition into 4K uses a cautious touch at best. It’s worth upgrading but only because the Blu-ray was so lackluster.

In DTS-HD, this sounds like the same mix from the Blu-ray. Much of the energy jumps from the score, showing off range to sell the shocks. Directionality focuses mostly on the stereos. Windows and doors shatter in specific channels, suggesting an aural space that matches the video. School PA announcements fill each speaker.

Peak highs sound rough, the treble strained enough to indicate age – but far older than 1996. When the killer first catches Drew Barrymore, the screams come across pale, flat, and stained. Fidelity isn’t an issue anywhere other than those major peaks. Even the music sounds great.

Paramount only includes a UHD inside the package, so that holds the bonuses, beginning with a commentary from Wes Craven and writer Kevin Williamson. A brief seven-minute retrospective is little more than an EPK. A real EPK from 1996 doesn’t hold much value anymore either. Raw set footage runs for the next three-minutes, followed by a piece focused on Drew Barrymore. Two short Q&A sessions discuss the genre.

Embodying the entire VHS era and the generation who grew up in it, Scream’s impeccable timing crystalizes an entire era of horror.