Many fans believe DC Comics has lost its way with Superman in recent years and Injustice unfortunately reinforces the worrisome trend. The venerable comic book company simply has no idea how to turn the character’s traditional heroic ideals, popular during earlier eras, into a compelling and exciting superhero compatible with today’s post-modern entertainment landscape demanding more than truth, justice and the American way.

Injustice really isn’t a story made for Superman’s fans despite his starring role. The movie opens with Jimmy Olsen being viciously murdered and it only gets worse from there. Injustice is a no-holds-barred R for its graphic violence.

Injustice is a sloppy adaptation best forgotten, one of DC’s biggest misfires in animation

Using his vast powers shutting down crime across the globe and punishing enemies, Superman becomes an unstoppable tyrant. His closest ally becomes Wonder Woman as they grow closer. The plot naturally sets the former heroes in conflict with Batman and a rag-tag group of surviving superheroes.

A hot property like Injustice was destined to get adapted for the screen, one way or the other. The R-rated film is a disappointment on multiple levels. How does Harley Quinn end up being the only likable character in a movie starring dozens of familiar DC superheroes and characters?

The original comic book series was a sprawling run that lasted over five years. Condensing its dense narrative with dozens of superheroes was always going to be an immense challenge given the budgetary and storytelling constraints of DC’s animated projects. The animators bite off more than they can chew, poorly compressing a huge story down to 70 rushed minutes. Many changes are made along the way from the source material. That is always an issue for DC adaptations but Injustice suffers from it worse than most.

Even if you enjoy Injustice’s violent premise seeing Superman go rogue, the execution here is decidedly lacking. It’s a tonal mess, mixing humor in with gory deaths and hectic pacing. The voice cast is dreadful, delivering some of the most awkward and rough line readings ever heard in an animated DC movie. Actors Justin Hartley (Smallville) and Anson Mount (Hell on Wheels) voice Superman and Batman. Gillian Jacobs (Community) as Harley Quinn may be Injustice’s only saving grace, tossing in a few choice quips which fit her well as the Joker’s girlfriend.

It’s hard being completely objective about Injustice as an old-school Superman fan. Almost every superhero and even a few supervillains act out of character pushing the twisted plot along. There’s a certain amount of dumb fun generated by the many deaths and surprises if you ignore the glaring flaws. Plot holes are rampant and the characters are poorly written. Injustice is a sloppy adaptation best forgotten, one of DC’s biggest misfires in animation. 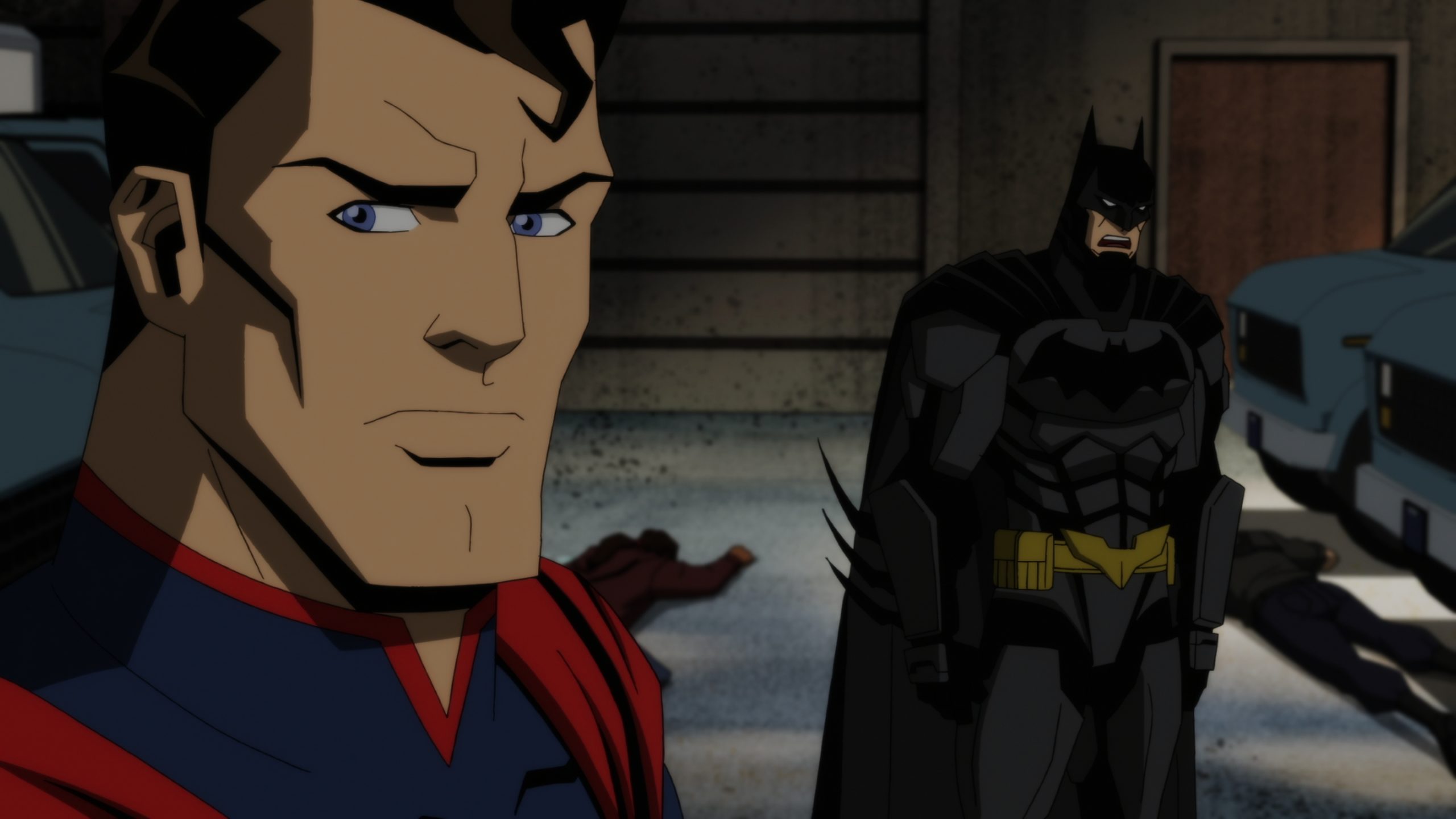 Many have noted similarities between Injustice’s animation style and the Mortal Kombat Legends movies, handled by some of the same animators working for WB overseas. Having already mentioned my displeasure with the odd character designs and weirdly angular proportions, there’s no questioning the raw video quality of this 4K presentation on UHD. If you must own Injustice, UHD is the videophile’s best choice with crisp, exciting animation well-suited for 2160p.

The animated film looks great with visuals that pop in stunning clarity, even considering its direct-to-video budget. The video is not a powerhouse in obvious HDR but one comparison with the 1080p on the companion BD reminds everyone of the expanded color gamut and more intense highlights. Primary colors are heavily saturated and the dynamic range offers far more subtle gradients in HDR.

The main features runs 78 minutes, encoded in flawless HEVC on a dual-layer UHD. It’s a technically perfect transfer with no tangible issues. Banding, always an issue for DC’s animated flicks on Blu-ray, is completely absent. That is one huge benefit of purchasing these animated projects on UHD.

Injustice’s soaring 5.1 DTS-HD MA audio packs a wallop. The highly discrete and immersive surround mix hits with crunchy bass, strong extension and great directionality in the many action scenes and superhero fights. It falls short of the best theatrical soundtracks but punches above its weight class for direct-to-video fare.

Fans of DC’s animated universe should know what to expect in the scoring department, continuing their excellent sonic track record. Dialogue reproduction is effortless, the soundstage is always lively and engaging, and the sound design reinforces every battle with precise cues.

It should be mentioned that Best Buy has an exclusive SteelBook edition. The regular 4K UHD release includes a Blu-ray and Movies Anywhere digital copy. A slipcover is available. The MA digital copy redeems in UHD quality.

Like most UHD releases from Warner, all special features are exclusively kept on the Blu-ray. Beyond the new round-table discussion, a couple featurettes from older releases are reused while adding a two-parter from Justice League’s first season.

Adventures in Storytelling – Injustice: Crisis and Conflict (30:55 in HD) – The key people behind the new Injustice animated film like director Matt Peters discuss how the intense story from the comic was brought to life.

Reign of the Supermen Flashback Featurette (02:48 in HD)

The Death of Superman Flashback Featurette (07:04 in HD)

Superman snaps and becomes a ruthless tyrant in this poor adaptation from the acclaimed video game and comic book series.