A decade after The Social Network, the least interesting story about Facebook is its origin. It’s important in attempting to compartmentalize founder Mark Zuckerberg (Jesse Eisenberg) as social recluse who designed the most social of social things. Who he screwed (or attempted to) over is less crucial than what Facebook has become.

In telling this story, Social Network adds a certain understanding about Zuckerberg’s resistance to change in the face of potential government regulation. After another decade in the future, almost certainly there’s another chapter waiting for a film adaptation, much as there is now.

The approach to turning Zuckerberg into a partially sympathetic character, someone who bounced off one idea, struck gold, and detached from those around him, doesn’t have the same thematic weight. It was different back when Facebook was a stupid college thing for college kids. Now Zuckerberg’s empire changes how we think, and a scene where Eduardo Saverin (Andrew Garfield) casually mentions an algorithm written on a window seems quaint – that algorithm and what it became now decides global political power, spreads lies, and divides society. Social Network plays more like the first act in a real world horror film.

It’s a complex thing. Eisenberg is sensational in projecting indifference toward multi-million dollar litigation. That grounding provides the necessary baseline to grasp (somewhat) Zuckerberg’s deference even at the most critical junctures in the website’s life. In that, Social Network hasn’t lost any of its dramatic potency. A flare up during a legal conflict notes no one in the room is a psychologist. Likely, few in the audience are either, but that doesn’t stop judgment against Zuckerberg, or maybe empathy as he takes on trust fund kids, groomed to be nothing other than on screen villains.

Asking who made Facebook is Social Network’s central question, and the plot wraps around various Silicon Valley names from the early-mid ‘00s, some who came into public prominence later. In terms of internet history, Facebook’s spread ranks with the dot com bubble bursting or AOL’s descent into nothingness; it’s crucial. Yet time diminished the need for this film, engaging as it is. David Fincher’s directorial hand tells a metaphorical murder mystery, with Zuckerberg picking off victims as the site explodes. There’s mood, there’s drama, there’s comedy. It’s a success, if seemingly a pile of nothing when considering Facebook’s place in modern society. 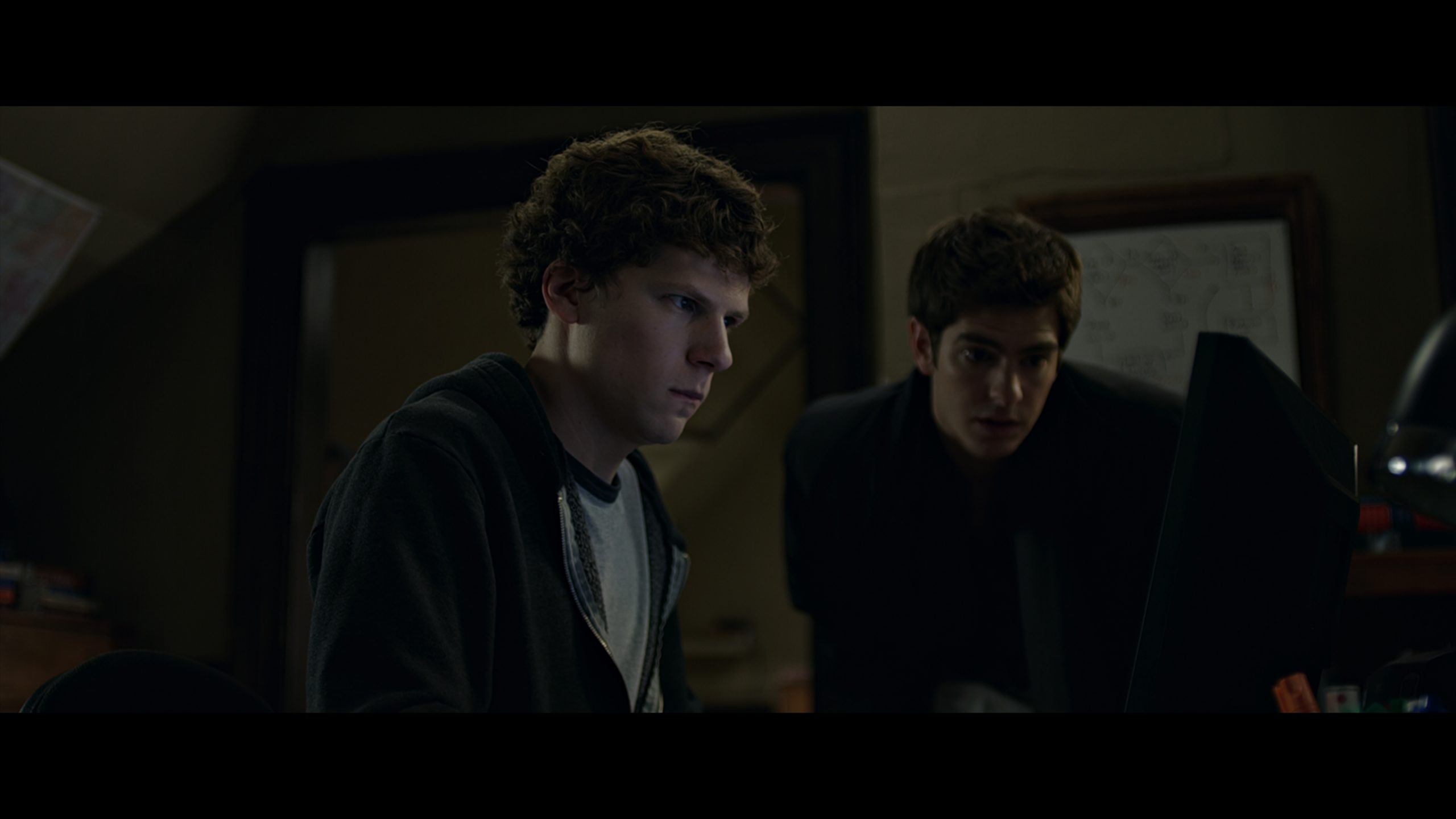 From earlier in the digital era, Social Network doesn’t seamlessly blend into 4K. While the softness in close doesn’t impress (and fine detail appears smudgy at best), the wide campus shots look outright terrible. Poorly defined edges, lackluster resolution, and dreary detail provide nearly no gains over the Blu-ray. Upscaling doesn’t offer any advantage, and only better compression makes a difference. Even the ringing remains.

This puts a lot on the Dolby Vision pass to do heavy lifting. In one sense, it’s impressive in how lights look appropriately enhanced. They’re bright, and stick out from the deep shadows. However, there’s nothing IN those shadows, and crush is a constant problem. The source footage simply never captured that data.

Utilizing a mundane color palette, Social Network uses the (then) popular orange/teal, restricting primaries and their intensity. Flesh tones might look okay, but most of the time, everything looks like a flesh tone. The cooler scenes flow in the opposite direction.

Bumped into Atmos, the design follows a similar path as the previous release. Atmosphere runs high, filling the soundstage with constant ambiance, whether in crowds or even the small flourishes like AC fans blowing into a room. School hallways reverb dialog, whether it’s the focus of the scene or background chatter. As for Atmos effects, there’s nothing happening.

Parties and clubs drive the low-end, dropping incredible power through the subwoofer. Range is brutal at its widest points, but also spectacular. About 80-minutes in, club music erupts, and the mix goes from average dialog to monster bass. It’s still a stellar home theater moment.

This one is split across two discs, the first housing two commentaries. The first lets David Fincher go solo, while writer Aaron Sorkin carries the main cast on the second.

Disc two begins with the 90-minute documentary How Did they Ever Make a Movie About Facebook?. The usual round of behind-the-scenes footage and cast interviews are superb, but so are those little anecdotes about Fincher’s style. An eight minute look on the visual prowess starts off a round of additional featurettes, diving into the digital shoot and the lighting. Post production has its own piece at almost 18-minute long, while the score gets 19-minutes of attention.

In the Hall of the Mountain King lets viewers compare an early version of the score to the completed edition. Swarmatron has Trent Reznor detailing a rather odd instrument used in creating the soundtrack. Ruby Skye VIP Room is a multi-view sequence, looking at the rehearsal up to the finished product either individually or all at once via a split screen.

The story of The Social Network is still littered with memorable characters, a decade on the Facebook story has grown to make its origins almost irrelevant, if not diminishing the film itself.