If Frankenstein’s Daughter leaves a single memory behind when the credits roll, it’s the raw boredom experienced during this mundane, sloppy quickie. Who can forget the agony of sitting through two full length musical performances meant to cash-in on the teen creature flicks, as if the title already wasn’t trying lure in the impressionable demographic from the, I was a Teenage [insert monster here] movies.

Apparently connecting itself to Universal’s Frankenstein on its own accord, this clunker features Dr. Frankenstein’s grandson who slyly names himself Dr. Frank (Donald Murphy). In this case, his insanity leads him to creating a lonely reanimated woman, nearly a full decade before the British Dr. Frankenstein (unrelated) did, so good on him.

A more positive person will see the rudimentary, familiar retread about a basement lab, flailing electricity, and the body-snatching assistant as a need to bring classic horror into a more nuclear-infused era. The rational cynic knows it’s only because the idea cost less and Frankenstein’s Daughter gave the producers market value.

While the makeup isn’t an infamous failure, it deserves to be. Unaware the monster would be female, the artists crafted a design meant for a man. With no time or money left, they added lipstick in a hilarious attempt to salvage the mistake. It doesn’t work, adding camp value in the extreme as the mad doctor praises his own work in making a female creature that’s so obviously not female. At all.

In the first act, Frankenstein’s Daughter is an entirely different movie. Young Trudy (Sandra Knight) becomes a ghastly creature due to the experiments, part Wolf Man, part Jekyll & Hyde. That’s discarded when the script doesn’t need her anymore, and besides, the story needs healthy not-teen teens as its heroes in the end. Can’t have them deformed as romance blooms.

The only thing worth seeing is Felix Locher, here in an early role, albeit in a career that didn’t begin until his 70s. He’s the desperate but rational scientist, kindly as to offset Frankenstein’s inevitable, hilariously over-the-top madness. Stubborn as his acting is, the accent and earnestness he projects is enough to make his scenes tolerable, even on the slapdash, no-budget sets. 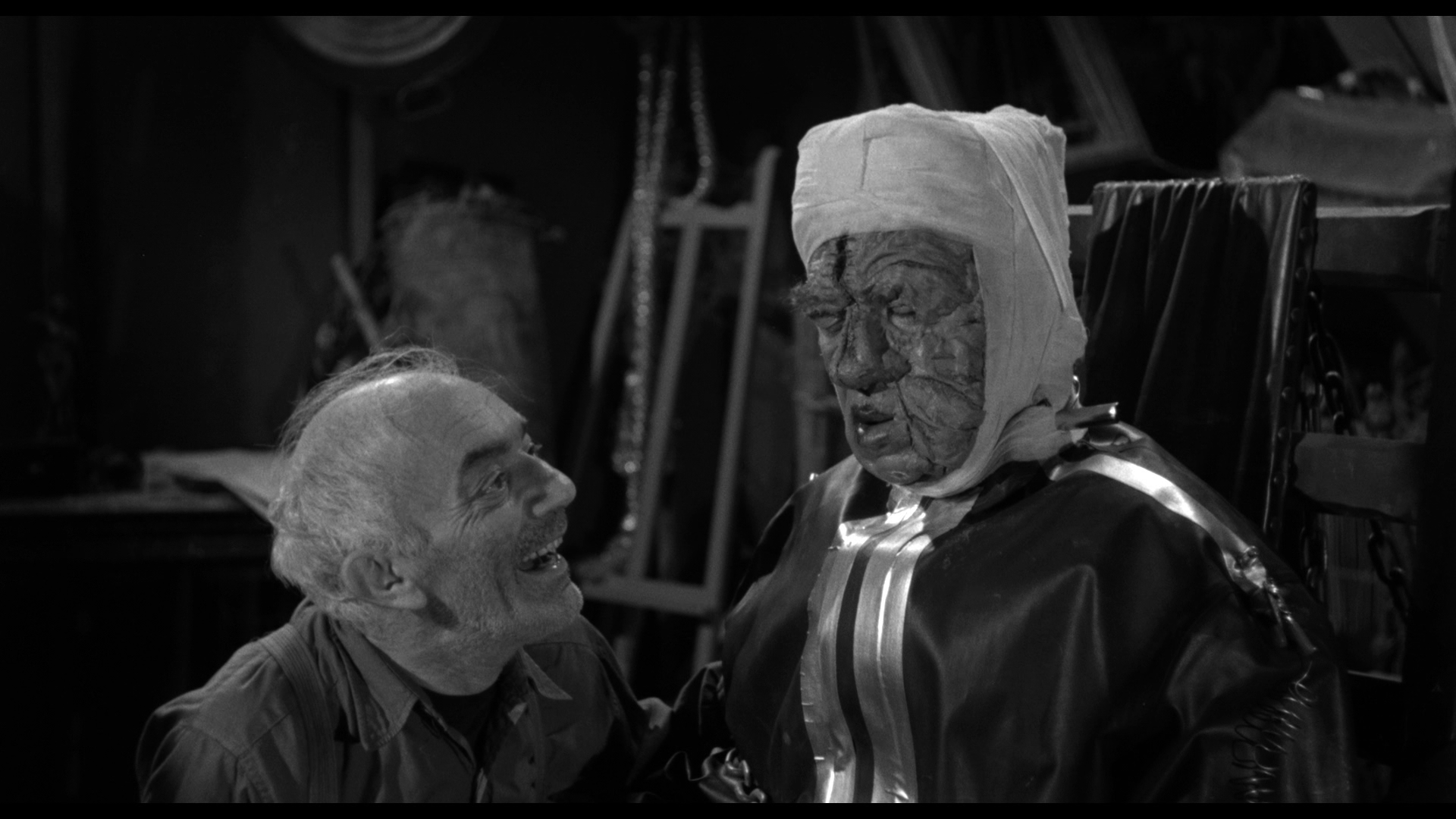 Although a bit on the dusty side, Film Detective’s presentation looks fantastic in terms of resolution. This is a sensational scan, drawing out detail consistently. Fidelity shines behind a clean, resolved grain structure, with things like facial texture leaping out. A dirt cheap production or not, Frankenstein’s Daughter looks better than its origins suggest.

If there’s a failing, that’s in gray scale. Frankenstein’s Daughter leans pale (especially outdoors), at times overblown in contrast. Black levels wane, while mid-tones bunch up in lackluster definition. The result is a slightly murky image, saved by the exceptional sharpness that can bring out the stitches on a vintage couch, even at distance.

Given the rapid shooting schedule, audio becomes wobbly, although not severely. The dialog’s coarseness doesn’t offend, and none of the lines are lost. Given how well the print looks preserved, the audio sounds equally pure. A cheap score isn’t pressuring the mix either, the few horns and occasional shock scare from the drums naturally dry from their age.

While the menu lists the wrong person, the commentary does come from Tom Weaver so that means it’s worth a listen (and he’s a huge fan of this movie). A 36-minute interview with Richard Cunha was sent to Weaver back in the ’80s, and it’s presented here. At 10-minutes, there’s a look at John Ashley, hosted by C. Courtney Joyner. It’s great. Actually, all of the bonuses are.

With much of the horror sourced from sheer boredom, Frankenstein’s Daughter feels desperate to hold on to classic horror’s last vestige of relevancy.