A Jury for the Country

Not all of Anatomy of a Murder holds up through time. During a pause in the film’s lengthy trial, the judge has to make a speech about using the word, “panties.” The audience erupts in childish giggles.

Consider though Anatomy of a Murder is effectively mocking those dated attitudes, and suddenly, that embarrassing laughter exists more to make a point. Through a trial that sees an American serviceman accused of killing a rapist, Anatomy of Murder pulls an entire country out of its comfort zone, challenging a sheepish, sexually conservative populace to confront this reality.

Anatomy of a Murder continues to hold power

This dialog once accused of being too brash, open, and demeaning for cinema is now standard in network primetime, yet Anatomy of a Murder continues to hold power. Hearing Jimmy Stewart, so calm and delicate in most of his roles, directly address a cruel, abusive event is still startling. Right on the precipice of the ‘60s – Anatomy of a Murder came out in 1959 – the aesthetic holds a serene post-war charm in full black & white. Yet, it’s an honest, truthful condemnation about a judgmental society that buried (and still buries) similar crimes.

Anatomy of a Murder has heroes and villains. Stewart is the small town lawyer on the defense, and George C Scott is a blistering lawyer for the State. Scott’s stares and accusations are brutal when cross-examining a rape victim. An entire sequence is just Scott breaking down Lee Remick, the victim, about how she dressed and the signals she gave to another man. There’s gossip elsewhere in the story about Remick and her sexuality. The intent is to show – explicitly – the cruelty in doing so.

There’s little doubt Remick is promiscuous; that’s not at issue. This story is about freeing a woman from those glancing eyes. Her boyfriend, the man accused of murder, isn’t angelic either, carrying a vicious mean streak. At no point does Anatomy of a Murder blame Remick for her relationship, and instead reveals her indiscretion was a call for help. She even flirts with Stewart, hoping he can give her an out from the abuse.

The result is a movie that’s as genre challenging as it is culturally progressive, with impeccable timing that suggested the coming decade’s social disruption. To this day, it’s surreal to view Anatomy of a Murder, considering even the hardest dramas from this period sought to dodge censorship by softening their plots, or relegating women to bit parts. Anatomy of a Murder makes a proper hero from a gender often used as a scapegoat. 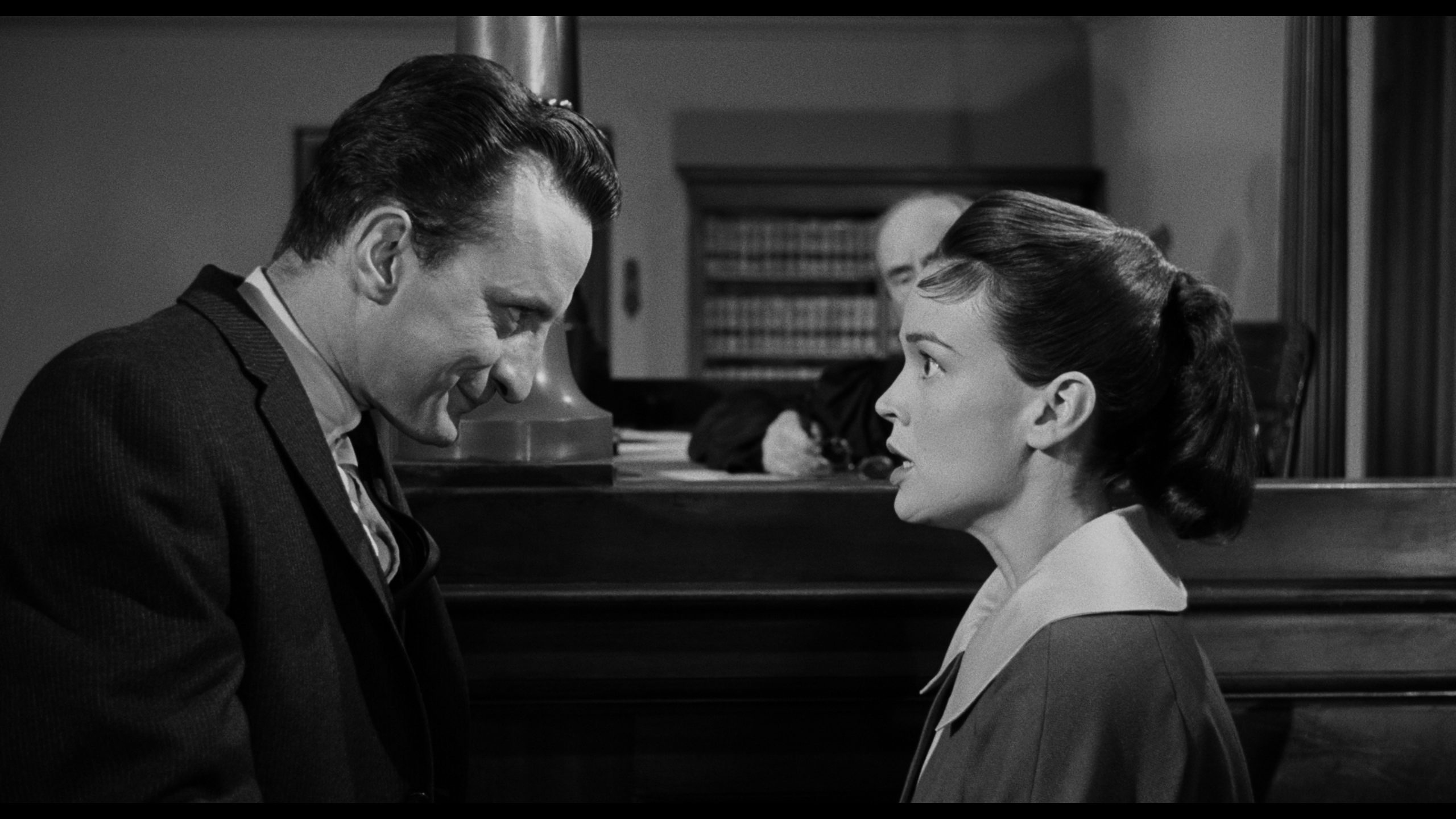 A truly stupendous effort by Sony brings Anatomy of a Murder into the modern day, enough so that it bests a number of new releases. Or, most of them. A beautiful HDR grading gives the black and white imagery incredible boldness. Shadows retain a constant pure black. Contrast perks up, adding life to car headlights, lamps, and other elements. Although peak brightness isn’t the highest, this is still a showcase. Gray scale succeeds in variety and smooth gradients.

Grain replication looks flawless. Encoding is absolutely transparent to the film stock (which is also spotless, devoid of dirt or scratches). Scanned at full 4K, definition hits absurd levels. Texture erupts from the opening frames and just keeps going. Facial texture peeks through time even in the mid-range, let alone the marvelous close-ups. Even after spending decades doing this, an output this good can still elicit surprise. Anatomy of a Murder is visually flawless.

Dolby Atmos is a little much, although the mixing does present opportunity for discussion about vintage audio and what’s right for these movies.

The way the score envelops the room (and at superb fidelity) adds genuine space to the track. A true bass line adds thump in the subwoofer. Extending to the stereos, small sound effects break free from mono. Listen as a drink is poured inside Stewart’s house – liquid splashes in the glass from the left front. While audibly not the original style, the effect is precise.

Same goes for traffic, passing trains, and voices inside the library, stretching the soundstage in a marginal way. A car wreck actually uses the height channels to send debris overhead. It’s interesting, but artificially inserted. Either that’s an issue or a welcomed change. It’s entirely personal.

The UHD is empty, but switch over to the Blu-ray for a trio of interviews running an hour total, a commentary from historian Foster Hirsch, and a clip from Firing Line that features Otto Preminger.

Anatomy of a Murder

Socially and culturally ahead of it time, Anatomy of Murder finds a courtroom case worthy of a more open time in American history.