Ivan Reitman wasn’t right for Stripes. Although Reitman went on to head Ghostbusters with a similar anti-authoritarianism/anti-government bent, Stripes needed the manic insanity of an Animal House – since Stripes is just Animal House in a military setting.

There’s a Gomer Pyle-like idiocy to Stripes, boosted by a judiciously applied R-rating, but that’s too gentle for what Stripes intends to do. Bill Murray’s plainly named Jon represents the perfect army candidate, and by opening on a recruitment ad, the script leans into how exploitative the promises of success are to those lost in life.

Murray lands the womanizing but lovable bum/loser/shyster bit, so no wonder he took the same part in Ghostbusters. His rebellion here sets out to establish an individualism within the army’s ranks. If Stripes ever took that to heart, maybe it had something. Instead, Stripes clumsily fits together like a series of skits laid on top of each other, bunched up into a loose storytelling semblance. By the climax, Stripes turns into an asinine Cold War power fantasy that goes against everything delivered earlier.

Not that Stripes isn’t funny, because it is. More so in the opening act, less so near the end. It’s impossible to pair Murray, John Candy, and Harold Ramis without patchy success. The problem is finding them things to do. A pace-stopping mud wrestling match has little to do with anything, and a brief flare-up between Murray and Ramis lacks dramatic weight; it’s there, and then gone. Meanwhile, Candy (and lesser still, Judge Reinhold) slip into the background, waiting for their screentime.

The misfit troop become heroes in the end. Of course they do. Light comedies won’t end any other way. What’s missed is the opportunity to turn this system on its head, that says yes, occasionally, some soldiers needs a different track to find their way, and allowing those personalities to flourish under the shouting, screaming drill instructors makes for a reliable grouping. While meant as bumbling idiots, commanders and generals seem barely functional here. That means when Jon and company overcome their challenges, it means little.

Stripes plays more like a step up as Reitman established himself post-Meatballs and Murray separated from SNL. It’s a cleaner, bolder film than the latter, just a step away from the miracle of Ghostbusters. Getting there took time, and an uneven output that included Stripes. 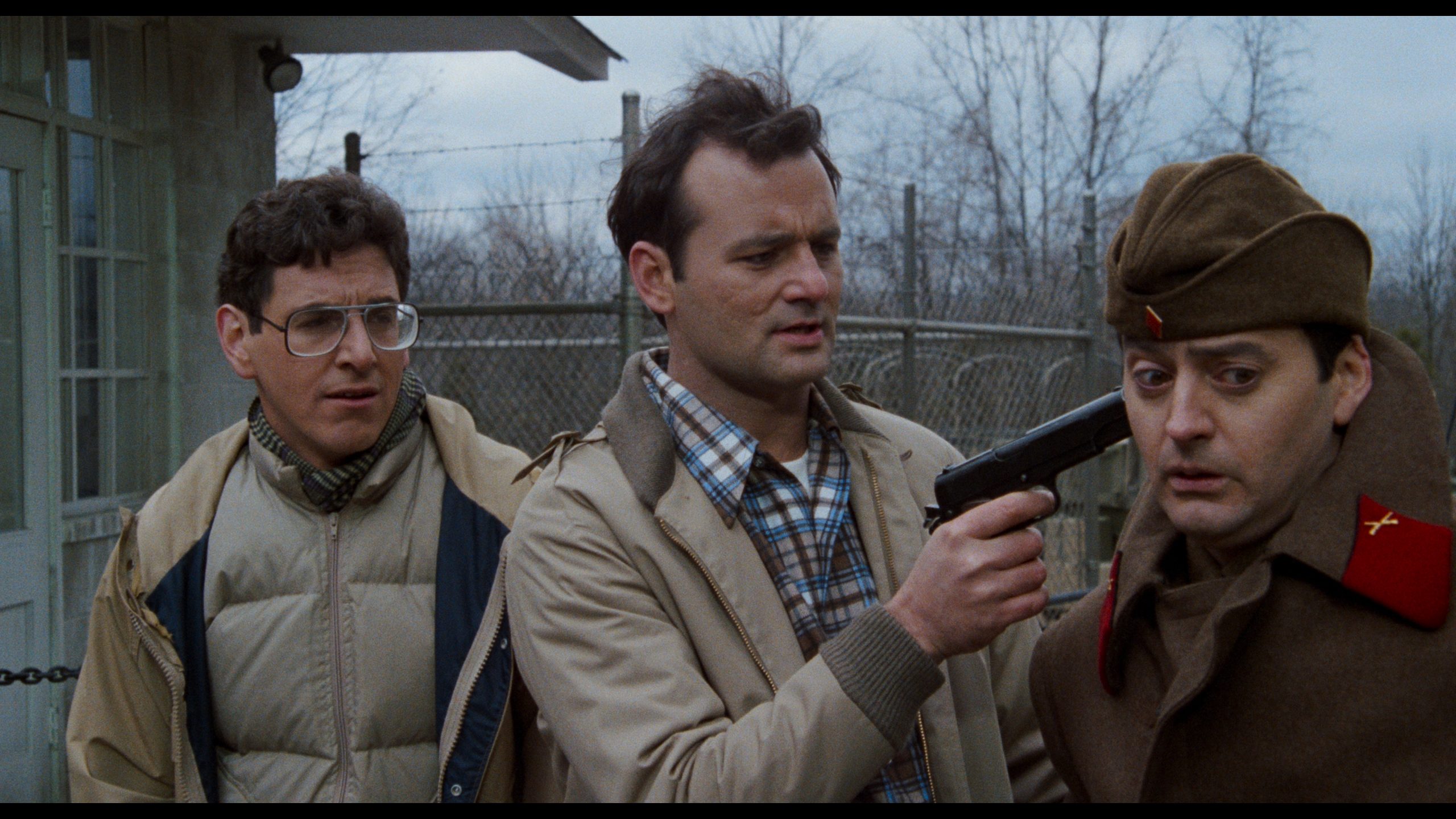 Whether it’s the extended or theatrical cut, Sony’s delivery is fantastic. Sharpness hits an absurd, consistent peak, nailing the film stock at full 4K. The resulting definition gives the city proper grime, facial texture proper attention, and everything else a spotless appearance. To think this came from 1981 seems almost impossible.

Stripes pushes a hearty, notable grain structure, left intact to preserve the fidelity. There’s more than enough encode space to handle the occasional spike. It’s consistent, and the print itself looks faultless. Sony doesn’t leave a speck of dirt or scratch behind. Other than the odd source fault (Murray around 19-minutes before getting on the bus), there’s nothing to complain about.

Bolder color saturation allows military patches and medals to dazzle. Stripes’ overall aesthetic runs appropriately earth-y, focused on greens and browns to pair to the military theme. That doesn’t mean a loss of color density, bringing boldness to flesh tones and other basics. A pleasingly firm HDR grade adds the right level of kick to the contrast, and tightening black levels. Improvements to shadow detail lets the master breathe.

Extending the 5.1 mix, Sony remasters Stripes into Atmos. It’s overkill, if effective. Tanks roll by, running into the low-end and a nice rumble that helps offset the expected aging. Mortar shells hit with force. Elmer Bernstein’s score thrives, rising through the soundstage, filling each speaker. Typical dialog flatness doesn’t affect the music. That’s especially true inside the Pom Pom Club where the bass line is near a point of overwhelming the rest.

Small flourishes help give Stripes life in the modern era. Helicopters fly around camp. Other vehicles like trucks accurately pan between the channels. Gunfire adds more space where needed. A careful touch makes this sound all natural, perfectly fluid, as if this were always the design.

A two-part retrospective brings Ivan Reitman and Bill Murray back together to reminisce (over Skype). It’s a great chat and lasts 44-minutes, both on the Blu-ray and UHD. Oddly, the commentary from Reitman and producer/co-writer Dan Goldberg (extended cut) only comes on the Blu-ray, like the rest of these bonuses. An older making-of splits in two parts. Thirty minutes of deleted scenes join the full TV cut (in SD) as a send-off.

Stripes has its moments as a military based Animal House, but the anti-authority bent doesn’t have enough bite coming from Ivan Reitman.