Blind Beast is one of the most audacious and grotesque horror films ever made in Japan. What begins as a clumsy, sexually charged survival thriller culminates in one of the wildest final acts in cult cinema. The unforgettable Japanese film leaves a lasting mark with its sick punch line, leaving the audience shocked and stunned.

Based on a short story by famous Japanese mystery writer Edogawa Ranpo, a blind sculptor’s passion drives him to kidnap a beautiful model. Living alone in isolation with his mother, a strange and twisted relationship develops which spirals into sadomasochist pleasures before degenerating into sheer madness. Blind Beast is a fascinating and often disturbing exploration of Stockholm syndrome, filtered through the lens of graphic exploitation filmmaking.

Blind Beast could easily be considered a primitive stab at early body horror, examining themes of self-mutilation and disfigurement. The sadistic horror movie ponders displacing the sensual pleasures of sight solely for the sense of touch, which fits its blind protagonist.

Michio (Eiji Funakoshi) is a renowned blind sculptor with a secret desire. He sculpts human body part-shaped statues from the flesh of unwilling victims in his private museum, a testament to his twisted passions. He’s enabled by his elderly mother, a woman with possessive control over her isolated son.

Michio kidnaps and imprisons Aki (Mako Midori), a model whose body he covets for designing his magnum opus. He hopes the statue of her body will produce his masterpiece and the culmination of his life’s work. How the forced relationship between Michio and Aki forms is the heart of Blind Beast, both sensually and graphically. However, the incendiary and gory climax shows an unbelievably deranged philosophy. It’s unlike anything I’ve ever seen before in body horror or elsewhere. 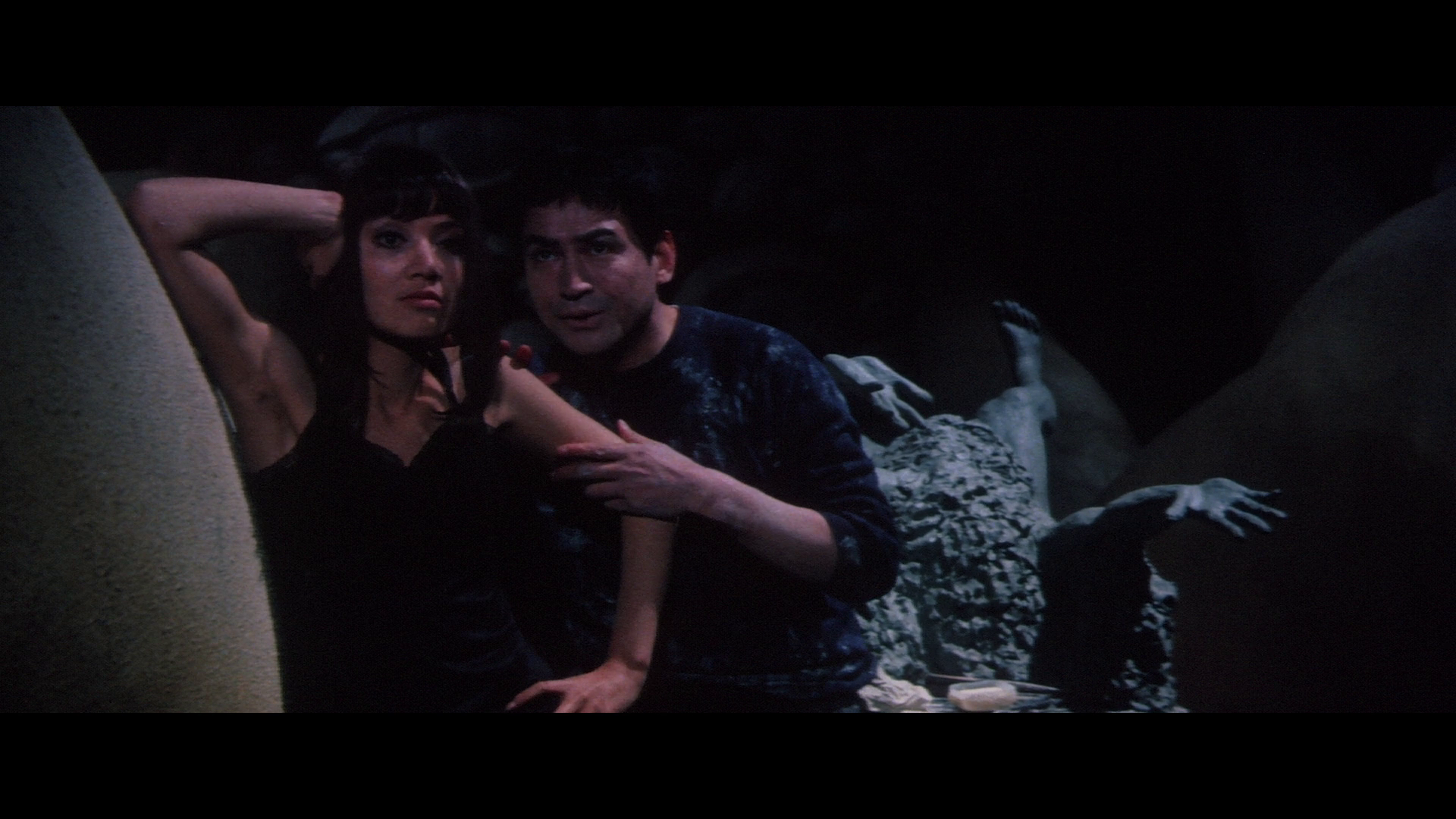 Arrow Video provides an underwhelming transfer sourced from the Japanese content owner for the 1969 movie. The included booklet includes this short blurb on its exact nature:

The High Definition master was produced and supplied by Kadokawa, with additional grading by Arrow Films at R3Store Studios, London.

Softness is rampant throughout the main feature. Minimal detail levels indicate an older film scan from a poor, secondary film element. It wouldn’t shock me to find out this is an older telecine struck years ago. The contrast is sufficient but middling black levels are hit or miss. A rough, fairly noisy grain structure marks the 1080p video. Blind Beast’s cinematography is scattershot at best, often out of focus.

Arrow has likely done all they can in terms of tweaking this dated film scan from less-than-exemplary elements. The picture quality is below their usual standards but it’s hard imagining anyone else attempting to properly restore the cult underground horror movie. This is the first truly legitimate home video edition for Blind Beast that isn’t dull and overly dim. A few scenes look decent in HD but there are also scenes which resemble DVD.

The original Japanese audio in mono is heard in decent 1.0 PCM considering its limitations. A simple but effective musical score has serviceable extension. Some thinness and hiss underlies dialogue passages. While not a powerful recording with crystal-clear clarity, the mono soundstage holds up with adequate upper frequencies and suitable presence. The intelligible dialogue stands out over the musical underscore and rare action cues.

The Blu-ray is coded for all regions and arrives in Arrow Video’s familiar clear case. Prior editions had no real special features, so Arrow Video produces several new featurettes and a commentary for the cult thriller.

The reversible sleeve features original movie art and newly commissioned artwork by Tony Stella. First pressings should include an illustrated booklet with writing by Virginie Sélavy.

Audio Commentary by Asian cinema scholar Earl Jackson – A well-informed commentary breaking down the movie’s cast and production in the greater context of Japanese cinema.

One of Japan’s most bizarre and disturbing movies, a gonzo body horror masterpiece of blood and sick desires.