Boris Karloff’s shambling, mumbling monster endured decades of copies and parodies. The entire film did, establishing a formula around villagers, burning torches, misunderstood creatures, and rogue science. But Karloff never gets proper due for the nuance he brought to this stitched-together being.

Critical to Frankenstein is creating empathy for this misshapen, isolated creation. That’s all on Karloff. After appearing, his master Henry (Colin Clive) commands the monster to sit. There’s a moment where, in Karloff’s eyes, he so flawlessly suggests slow moving thought. Something triggers in the implanted brain – a memory, a condition, a debate – as to a proper course. He can obey. He can fight. At that point in his reincarnated life, Karloff’s creation only wants to understand.

Frankenstein brashly shouts about its crime against God

Clive is a sensation, loud, manic, and demanding of attention. Karloff works with less though, shuffling around ingeniously surreal sets containing misshapen angles, recalling the German expressionists. Frankenstein brashly shouts about its crime against God, and looks the part while confined in a Gothic castle, surrounded by underground and stone. It looks miserable, and Karloff’s hauntingly empty grimace shows as much.

Director James Whale follows the script per Universal’s norms (although in 1931, they weren’t quite so normal yet) – a fearful anti-science slant within an older English town beset by a terror. Frankenstein does more than most however, partly by redeeming the scientist responsible, if not dressing him as perfect archetypal hero. Henry’s father is a snooty, rude old rich man who (literally) looks down on people in his village. There’s a subtle tryst too, Henry too blinded by his own ego to notice, or maybe too smug to think his soon-to-be-wife would be with anyone else.

Evil in Frankenstein isn’t the monster, nor what is it ever intended to be. In Whale’s work, it’s the unrestricted upper class who have the money to carry out such experiments and betray an ingrained belief system to catastrophic effect. And knowing Whale never revealed his sexuality publicly, it’s easy to read the monster as somewhat personal – persecuted for who he is, and unable to freely express his feelings. Images of Karloff shackled and the uncomfortable fear as fire burns around him at the end look appropriately haunting when seen through the lens of a gay man who could never safely speak on his relationship. 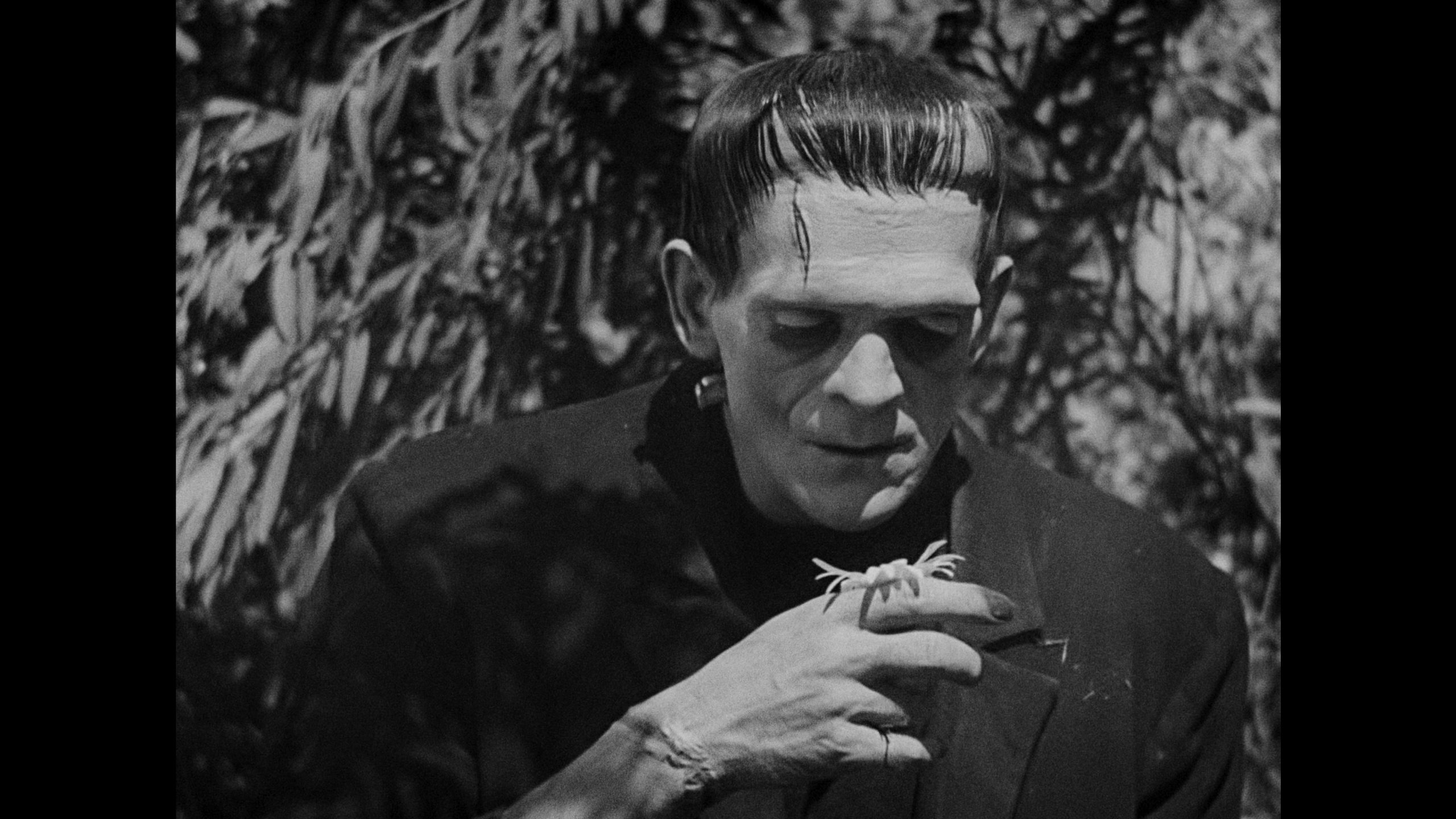 Frankenstein’s visual grimness isn’t the heaviest in contrast, but that doesn’t mean the HDR grading is useless. As the science lab activates, sparks begin shooting, and electricity bounces around, those highlights prove their worth. Intense brightness gorgeously clashes against the deepened shadows, and mid-tones are equally resolved. The overall gray scale is visual luxury.

Universal puts out a near flawless print. Only a few specks remain (and a few dropped frames too). The period’s cinematography often drifts toward hazier romanticism, but when unobstructed by that aesthetic, resolution explodes. A true 4K source finds every possible detail, bettering the already great Blu-ray (and helped by the added contrast). Picking up on the painterly quality of interiors or the cloth backdrops on soundstages is easy now.

Preserved and resolved grain allows everything through, even facial texture. It’s difficult to imagine Frankenstein ever looking better.

Left as-is in a DTS-HD mono track, it’s possible pick up on the studio sounds running in the background. Camera motors and static both feature in this track, preserved minus any alterations.

For the early sound era, the expected dull treble and wobbly score cause minimal harm. There remains some warmth within this vintage track, almost soothing in its analog-like precision. Everything is audible, and there’s no issue in perceiving the dialog.

Two commentaries vie for attention, one from historian Rudy Behlmer and the other via pop culture professor Sir Christopher Frayling. If you want, you can double either of those with a pop-up trivia track.

The Frankenstein Files is a 44-minute feature that has been around since sometime in the late ’90s, a generous look at the historical significance of the creature. Karloff: The Gentle Monster is a pleasing 38-minute biography on the star and his horror career. Universal Horror takes a more expanded approach as it delves into all of the studio’s monster mashes for 90-minutes. Thumbs up to that one if you haven’t seen it before.

Archives is a video clip that pushes through posters and other related materials. Boo! A Short Film is a comedic look at Universal’s horror slate up to 1932. A promo for the Universal 100th Anniversary restorations and trailers round this one off.

Bested only by its sequel, Universal’s Frankenstein capably conveys the story’s horror and compassion in a masterful way.