What Music They Make

The fear in Dracula isn’t that of being bitten or becoming a vampire, rather the uncomfortable luridness as a creature breaks a home’s sanctuary. As a pre-code horror offering, Bela Lugosi’s still unmatched screen presence does more than evoke terror from his eyes. There’s an evil in his ability to control, to separate, and demand obedience after a notably suggestive sexual dominance.

Considering the male-dominated, religious conservatism in the 1930s (and prior), Lugosi’s Dracula stands against the social puritanism. He wakes during the night to be with his women. Unseen, he slips into the bedrooms of married brides. They live, but only under Dracula’s cruel authority. In Renfield (Dwight Frye), Dracula finds a bisexuality that for viewers in 1931, was impossibly obscene.

Dracula is better when considered against the norms of its time

Dracula works alongside the evocative sexuality, using the beliefs of Van Helsing (Edward Van Sloan) to stabilize the uneasy tone. Beginning here, Universal’s iconic horror cycle churned a specific anti-science theme, generously tearing down research and medical systems for their stubbornness in accepting myth or legend. Catholic symbology wards off the monster, the crucifix an impenetrable barrier used against Dracula and his Satan-esque villainy – which again, relies on breaking traditional marriage bonds and forcing women into a sexual slavery.

Dracula doesn’t elicit the same nefariousness it once did; culture and society progressed. The rather staid direction lags even with a slim runtime too. Although credited with ushering in a golden era for the genre, Dracula is better when considered against the norms of its time. No blood is shown, just suggested. Lugosi’s emotionless stare as he seems to float toward his victims is still unnerving because his bloodlust looks so passe. He’s a stalker, a madman, a killer, whose centuries of life and foreign bravado made this easy.

Later Bram Stoker adaptations, while almost universally more accurate to the source, lack the starkness and purposefully limited scope from Universal’s icon. The few characters wrestle with their own personal beliefs and morals as they surround a passionate young couple. After Mina’s (Helen Chandler) is bitten, she can no longer be with her future husband. It’s not a fear of disease or death, rather one of impurity. In that comes a commentary on how forcibly trapped women become/became when judged by association alone. Much as Dracula represented a strict doctrine, those small touches indicate a lingering sense that a more liberal standard was near. 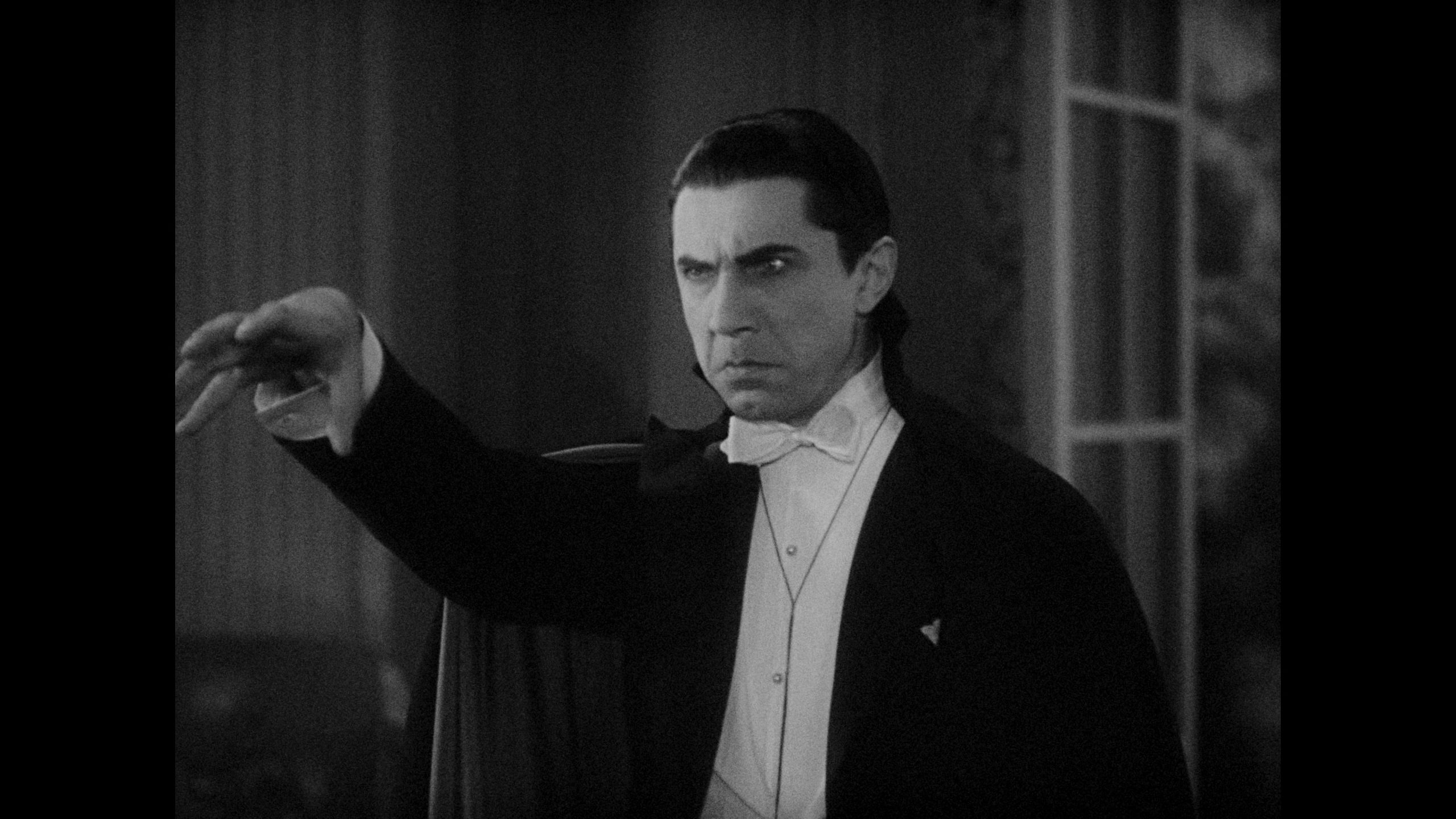 Gorgeous source materials begin a near flawless 4K-sourced presentation. Lush detail (where the often softer cinematography doesn’t factor) clearly produces more information than previous HD transfers. Peak sharpness hits an absurd tightness. Perfectly replicated grain brings another layer of texture, and even when amid heavy fog, encoding holds its own to keep the film aesthetic intact faultlessly. The print itself only shows a few specks of dirt, nearly flawless, and few films from this era appear so clean.

All of the brooding castle interiors bump up contrast, a film unknowingly destined for the HDR era. Lush shadows dominate where needed, the gray scale stunning. Dracula uses highlights more than expected too, whether the glistening off someone’s eyes, candle lights, or even the dynamic white of Lugosi’s shirt, all jump from this transfer. Compared to the already brilliant Blu-ray, the improvement is worthy, and a testament to UHD’s capabilities.

Being of the earliest sound era, Dracula’s roughened audio does what it can in DTS-HD mono. While dialog indicates age with coarse treble, the scratchiness doesn’t cause any permanent harm. The olden analog purity, grazed by static, delivers appreciable warmth. It’s doubtful there’s anything left to wring out of this track, and the preservation efforts are appreciated.

Historian David J. Skal is on hand for commentary duties, a factual presentation that layers on the information. Die-hards will know it all, newcomers will love it. There’s an additional track from screenwriter Steve Haberman. You can also turn on a pop-up fact track.

The Road to Dracula is an older piece from 1999 hosted by Carla Laemmle. It has a nice, TV-level quality to it. Lugosi: The Dark Prince focuses on the actor and his memorable appearances. Combined, those two features run about an hour.

Dracula: The Restoration shows Universal’s process as they brought the film to Blu-ray. Archives host all sorts of art, posters, and more. An alternate score by Phillip Glass fills in much of the dead air, but arguably dims the mood. Some trailers (SD) and the restored Spanish version are also on the disc.

Bela Lugosi’s on-screen menace as Dracula has never been matched or bettered, letting this lurid tale keep its spot among the horror genre.