Nashville is Robert Altman’s most critically acclaimed film, widely considered one of his masterpieces. The unconventional narrative with a gigantic cast of 24 different characters becomes a sprawling cultural satire mixed with humor, drama, musical performances and social commentary.

Following themes of celebrity and stardom as they play out through Nashville’s rich country music scene, the ambitious epic doesn’t hit quite as hard today as it once did in the 1970s. Some of its relevancy has been lost over time though Altman’s accomplished direction and an array of engaging performances by the talented cast holds everything together. Dare I say that Nashville has become one of the more overrated films made by Altman during his long and productive career. He develops an ensemble storytelling approach borrowed from such films as Grand Hotel he’d further refine in the 1980s and 1990s.

Nashville’s idiosyncratic characters each have their own arcs and the screenplay by Joan Tewkesbury neatly smashes them together in unexpected ways. Rock musicians, Hollywood celebrities like Elliot Gould appearing as himself, fictitious politicians, and a broad swath across Nashville’s socioeconomic spectrum collide. Often driving the satire home with pointed humor and social commentary, something emerges from the messy narrative which doesn’t lend itself to easy characterization.

Running well over two and a half hours, Nashville is a complex portrait of American society critiquing everything from celebrity worship to political campaigns. Each actor was given wide latitude shaping their own character and that freedom results in a freewheeling tone. Nashville is part musical on some level, though it often comes off as a parody of the country music scene in the 1970s.

Altman’s condescending attitude concerning Nashville as a city and its music drips throughout the movie. The cultural divide between Hollywood and the rest of the country didn’t start only a few years ago. The movie provides a microcosm of how Hollywood in the Seventies viewed what people now call flyover country. Admittedly, some of the clever and amusing satire is clearly directed at Hollywood itself. 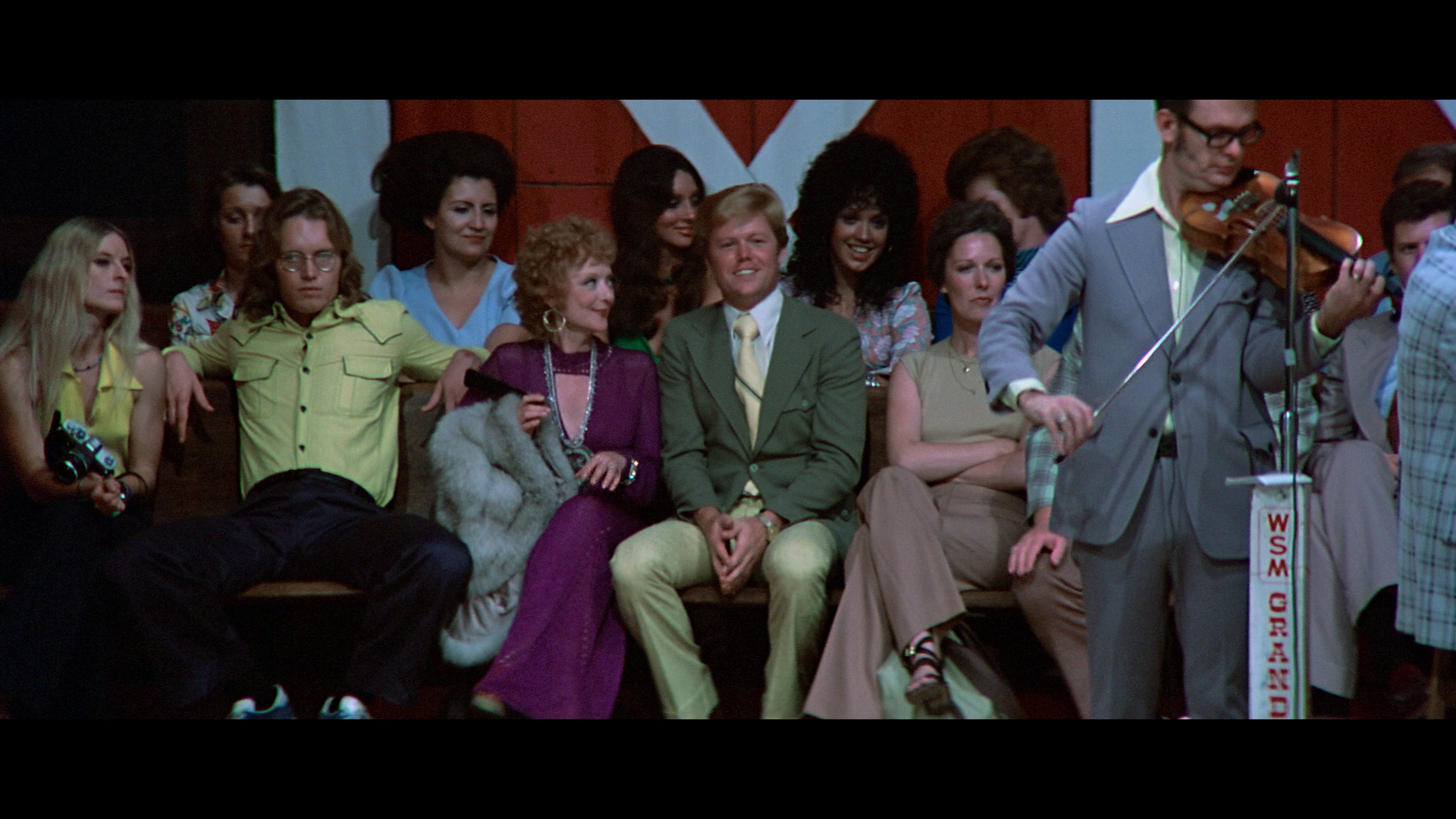 Paramount provides a new 4K film transfer from the original camera negative for Nashville. This is by far the most transparent rendering of the elements we’ve ever gotten for Altman’s movie. The 2013 Criterion BD wasn’t poor but came from a 2K scan with suspect compression parameters. Evidence now points to the fact that Criterion’s master was overly sharpened. Paramount basically gives all of a BD-50 to Nashville’s 160 minutes with top-notch parameters. It’s a beautiful AVC encode which captures the fine grain structure with depth and solid definition.

Nashville isn’t a stunner. Paramount’s color grading offers deeper saturation and brighter primaries over Criterion’s more reserved tone. It’s difficult to say which is more correct. Overall picture quality is hampered by the soft and occasionally gritty cinematography in its proper 2.35:1 presentation. The elements have an organic, healthy appearance without evident video processing. The 1080p video doesn’t sing with razor-sharp detail, reflecting the gritty film stock of the era.

Paramount did the correct thing and gave the movie a satisfactory 4K scan. The studio decided a UHD release wasn’t worth it. This BD is better than Criterion’s older transfer but fans will have to decide if marginal improvements in clarity and shadow detail are worth buying the movie over again.

The 1975 film’s masterful sound design was a marvel in its day for its complex layering of different conversations. This 5.1 DTS-HD MA soundtrack captures the predominantly front soundstage with pinpoint clarity and excellent musical fidelity. Rear channels aren’t heavily employed besides light immersion.

The dialogue exchanges between different sets of characters come across in well-defined imaging. Some dialogue is intentionally muffled. The musical performances are balanced and play in fine dynamics.

Optional English, SDH and French subtitles play in a white font inside the scope presentation.

Nashville is numbered 24 in the Paramount Presents line of collectible Blu-ray releases. Paramount finally issues Altman’s classic on BD after licensing it out to Criterion back in 2013. As part of Paramount Presents, the disc arrives in the now familiar collectible slipcover packaging which features a foldout image of each film’s theatrical poster and an interior spread with key movie moments. A digital copy is included which can be redeemed on either iTunes or VUDU in HDX quality.

The only new special feature by Paramount is the 24 Tracks featurette. If you are looking for more in-depth extras, you’ll need to hunt down Criterion’s out-of-print BD. If you can play Region B discs, UK label Eureka issued Nashville with a completely different set of special features. The big lure here is the new 4K film transfer. It should be noted that streaming services are carrying the 4K UHD digital version, likely made from the same transfer used on this disc.

Commentary By Director Robert Altman – Recorded back in 2000 for the original DVD release, this solo commentary is hit or miss. There are some gaps but Altman covers a wide array of how the film was made and memories of filming specific scenes. Fascinating for big Altman fans and probably a bore for everyone else.

24 Tracks: Robert Altman’s Nashville (15:56 in HD) – A new featurette focusing on the screenplay, certain characters, how the story was developed, and further production background notes. More substantial than EPK material, this is worth a watch.