Christolph Waltz deserved his Oscar for Inglorious Basterds. There are few other cinematic figments of Nazi Germany’s cowardice, egotism, or selfishness that match Waltz’s Hans Landa. His work is a masterpiece.

For the first 20-minutes, Inglorious Basterds is all Waltz. It’s a terrifying, tense, masterful sequence that involves little more than conversation over milk. Tarantino’s script lays out the corroded Nazi mindset, and through Waltz, makes their bigoted thinking appear almost rational, yet coming from someone ferociously insane. Before anyone is even shot, Inglorious Basterds gives a greenlight to torture the German war machine, and in traditional exploitation methods, finds heroes willing to do so.

This is never a movie about Americans. Tarantino’s style rapidly establishes a small squad of Nazi-scalping soldiers and shows their methods in physical, scarring counter propaganda. Blood sheds, people die. The genius is in the dialog – typical for Tarantino, but meaningful when placed in a historical fantasy. Fear doesn’t come from the bloodshed; in fact, Inglorious Basterds enjoys seeing Nazi bodies explode into pulp, and places appropriate gravitas to the innocents gunned down.

Rather, the fright is in how effective speech can be and is. That’s Waltz’s success, the tick of being artificially pleasant as he extracts information, then shutting down any empathy for his victims. Waltz’s victims stay guarded, uneasy; Waltz knows this. At one point, he breaks down laughing at the absurdity of a mountain climbing lie. He enjoys watching people contort their way through their deception, wearing smugness on his face as they squirm.

It’s dismissive to call Inglorious Basterds Nazi-sploitation. Elements of the genre permeate the third act and undoubtedly during a finale that sees the entire German command obliterated in mere minutes. Inglorious Basterds makes the people behind the atrocities appear lucid to a morbidly comic degree. That’s the success, because of instead of relying on cardboard tropes and treating Nazis as bullet sponges, letting them speak is the ultimate condemnation.

Hearing someone talk about inhuman acts isn’t enough on its own. Those words subsist in history books. Seeing the face of someone, actor or not, reciting these grotesque worldviews with such simmering animosity brings a different uneasiness. Tarantino’s ability to unwind a scenario in sections, adding details visually, only emboldens Inglorious Basterds sadistic power to show how the Nazi’s worst could function. That at any point they sound stable is disquieting. 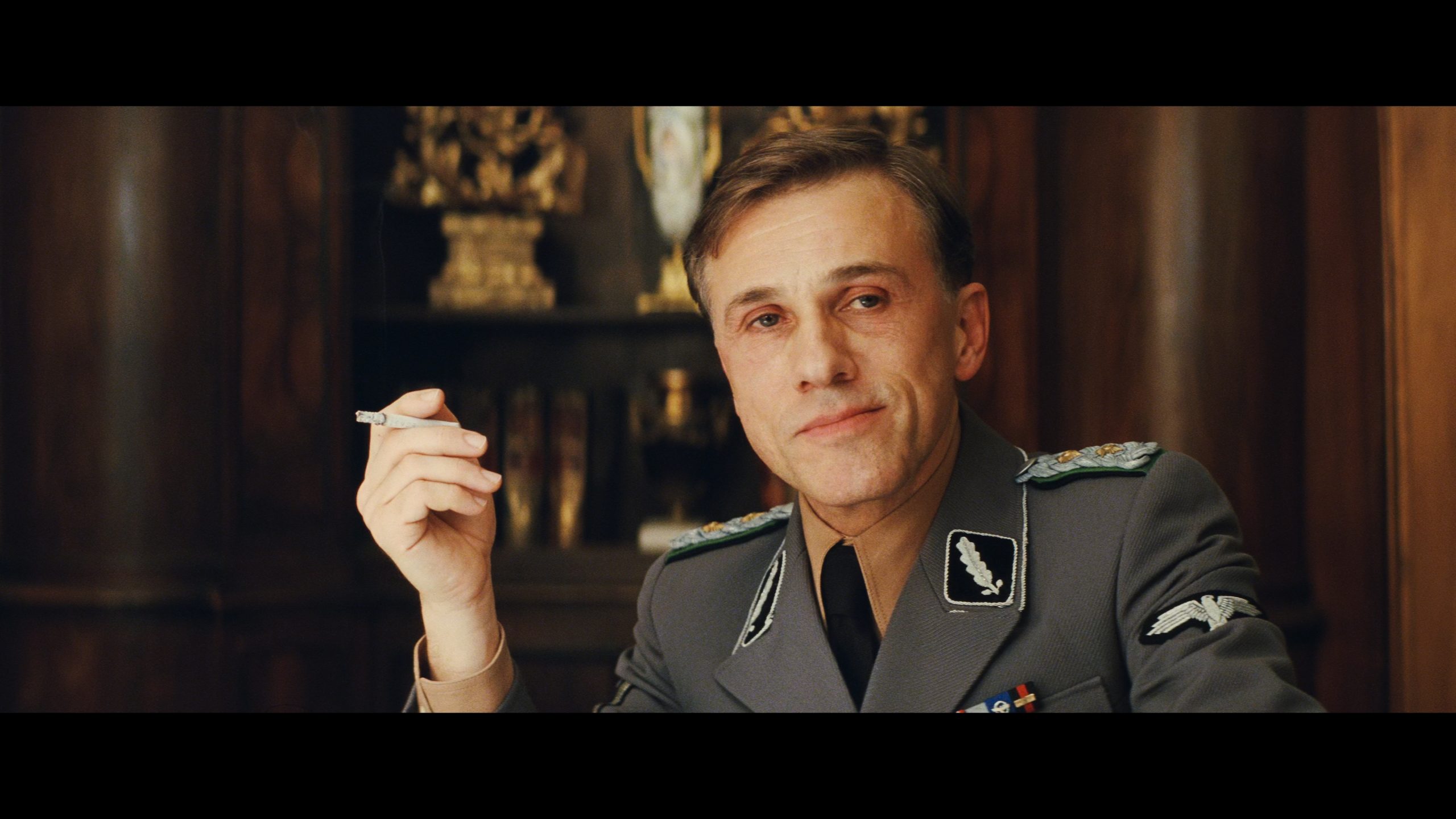 There is a cost though. Some of the vivid areas break down into chroma noise. Enhancements to the color cause similar issues on more complex, detailed areas of the frame. Mild grain isn’t at issue, and it’s preserved; this is all an encoding lapse.

In pushing the resolution to 4K, the process mars the natural quality. Wide shots appear harsh, sharpened digitally. A slight ringing is detectable, and while not severe, it’s enough to cause issues. Inglorious Basterds sports plentiful detail when in close. Facial texture shows prominently where possible. More than the Blu-ray? A little. Improved contrast adds more than the resolution does. It’s a lackluster boost over the HD disc.

The DTS-HD 5.1 mix transfers from the Blu-ray. Those lucky enough unworried about volume levels will enjoy the pounding, bass-filled gunfire. The range is massive. Bullets ricochet off their targets, and envelope the surrounds and stereo channels. The finale is an audio powerhouse, with roaring flames taking hold of the LFE channel, and panicked screams coming from the surrounds. Gunfire is dominant here as well.

Dialogue scenes are typically flat with zero ambient effects, keeping the audience focused on the words, not random sound cues. Whereas other films may have mild chatter in the rear channels during a dinner scene, Basterds is quiet, even eerily so, creating tense focus on the characters. This is intentional and appropriate.

The extras menu begins with three deleted scenes that run over 11 minutes, not surprising coming from Tarantino. The film-within-a-film, Nation’s Pride, is presented in its entirety (six minutes), although only in standard definition despite clips on the disc elsewhere in a mock making-of shown in HD. A new roundtable includes Tarantino, Pitt, and Elvis Mitchell. A post-screening chat follows.

A somewhat dry half hour interview with Brad Pitt and Tarantino is helmed by Elvis Mitchell. The Original Glorious Basterds is a brief featurette on the 1977 film and its influences. Two interviews with Rod Taylor (who played Winston Churchill) probably should have been combined. Brief footage from Tarantino’s film clapper is amusing, as are a compilation of clips created to say “hi” to the editor. A tour/explanation of the posters used in the film (along with a still gallery) mark the end.

Inglorious Basterds never holds back in showing cruelty or violence, mastering the Nazi-sploitation for something that’s as rich as it is exploitative.