Cruella’s immediate challenge is wiping out the absurdity of telling an origin story about a woman who kills dogs for their fur. The solution is clever: make everyone around Cruella (Emma Stone) infinitely more despicable, and lift Cruella up as a bizarre counter-culture feminist icon amid the tumultuous late ‘60s. Turns out that’s enough.

In this world, Emma Thompson rules above all as a popular Baroness, sniveling as she looks at her employees, despising their existence, and stealing credit. Her narcissism finds a balance between raw villainy and the cynically comic.

To the near constant droning of contemporary hits, Cruella turns Thompson’s opposite, Emma Stone, into a beacon of empowerment. She begins the movie scrubbing toilets, tormented by an egotistical boss, and then by chance (and sleight of hand) rising to become a British fashion pioneer. While overlong, the growth from nothing to something feels organic, and even with the Cinderella-esque fantasy, Cruella smoothly adapts to an era of upsetting the norms.

There’s one tease suggesting Cruella kills some Dalmatians. Otherwise, she’s just a thief on the side, running through a heist movie and its cliches. Unlike many in this genre though, the foil becomes personal, and Cruella’s lavish iconography makes this story feel more grandiose than it actually is. In reality, Cruella tells a fable about smug fashion designers clashing with one another for headlines. It’s a superficial, spiteful contest.

Cruella, donned in primarily pure black with parted black & white hair, looks like an antagonist – but not one who looks as such for anything devious. The stark divide in those shades becomes unmistakable amid the flashy galas. There’s a little goth, a little rebellion, and undeniably some contempt in her look.

Whether it’s right or not, Cruella makes note of a split personality, that ying/yang represented by her divergent style. Stone’s niceties come from Estella, her devilish vibes from Cruella. It’s discomforting to play up a multiple personality disorder this way, although Cruella offers a semi-solution for that too near the final act. That choice shrinks the film’s world, narrowing focus on these two women battling for an edge. It even makes sense, which is Cruella’s greatest accomplishment – turning a movie about a known dog killer into an entertaining feature. 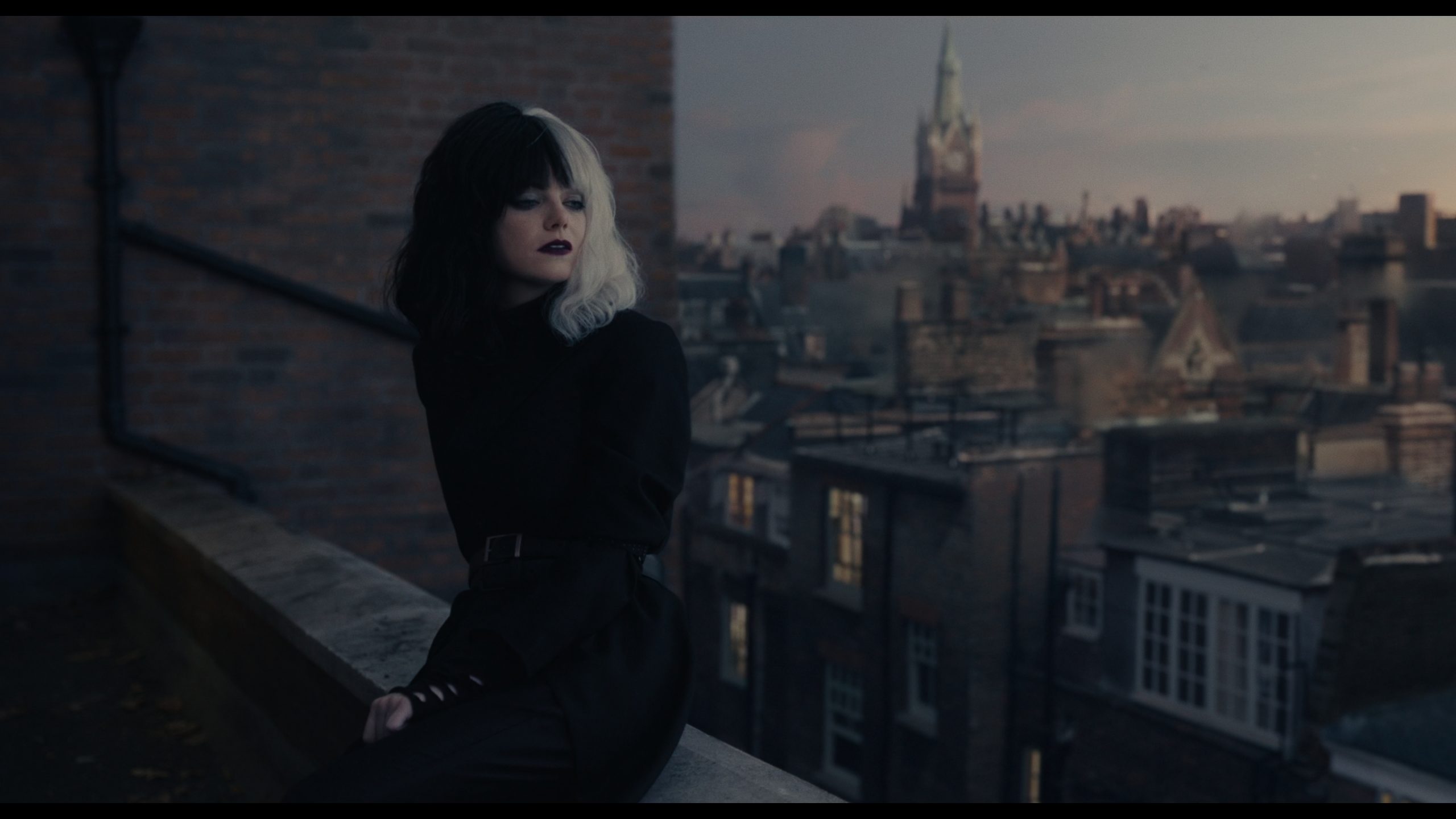 A mixture of 4K source material and 2K effects, Cruella looks pretty dazzling much of the time. Being set in the ’60s, the aesthetic isn’t conducive to pushing black levels into the deepest density. Shadows reside more in a shallow gray. Highlights veer toward warmth and occasional cools. That recedes the HDR, a duller effect than many expect from the format. The impact though is minimal once invested in Cruella’s world.

Cinematography stays in a softer lane, but that’s not to say the texture isn’t there. Close-ups resolve facial texture and digitally recreated London exteriors display pleasing definition. Things like wallpaper and tile stick out, lavishing attention on set design.

Faded color gives Cruella a sepia push. Primaries can only gain so much energy in these circumstances. Warmer flesh tones dominate, while saturation overall sticks to the dry tones. Iconic red buses have some energy, as do sunsets and such. Nothing startling, rather pure.

Another strong effort from Disney makes use of a solid Atmos soundstage. Rain filters into the overheads and rears. Cars pan between speakers when streetside. A great soundtrack makes a brisk transition into the available channels, flawlessly extended from the original mixing. Atmos effects never factor in, or at least not in any notable way.

Smooth low-end adds weight to the music. Occasional need for LFE like waves crashing into rocks or thunder produce a steady thump that’s satisfying. Oddly, the potency flattens as cars slam into each other, or as a truck smashes through a building.

Disney keeps everything on the Blu-ray for this department, and it’s barely worth putting the disc in. First up is a featurette on the two leads that runs 10-minutes. The next one runs five minutes, focused on Cruella’s sidekicks. Over nine minutes, the next extra focuses on costume designs, with production design following over six minutes. The dogs earn their due in six minutes. Cruella 101 is an EPK that explores the character. A two-minute blooper reel follows that, and deleted scenes mark the end point.

Cruella is a cynical delight that overcomes a ridiculous premise by nailing its tone from the outset to make a villain an actual hero.