Crazy Nights is one of the stranger exploitation movies to come from Italy during the Seventies. Originally known as Follie di notte in Italy, underground filmmaker and cult legend Joe D’Amato constructs a nearly X-rated faux “documentary” around disco singer and starlet Amanda Lear.

Uncut and remastered, Crazy Nights is a weird cultural relic from another time. Amanda Lear narrates and hosts the documentary after performing one of her signature hits. The conceit by Joe D’Amato is that each scene is footage taken from nightclubs around the world, offering a broad survey of the sexy shenanigans happening in different continents.

The disco sequences have a certain energy to them if you are into burlesque shows and the lively performers certainly have fun. Hosted by Amanda Lear, she narrates and introduces each segment. She also opens and closes Crazy Nights with performances of her two major disco hits.

The “documentary” is mostly a thin excuse by Joe D’Amato to cover the underground shows going on at night clubs in Europe, combining the popularity of disco in 1978 with a lot of nudity and silly adult games for the exploitation market. The odd, dated curiosity made for the European exploitation market has its moments, mostly thanks to Amanda Lear. Disco fans and anyone who remembers Amanda Lear might want to check out Crazy Nights. 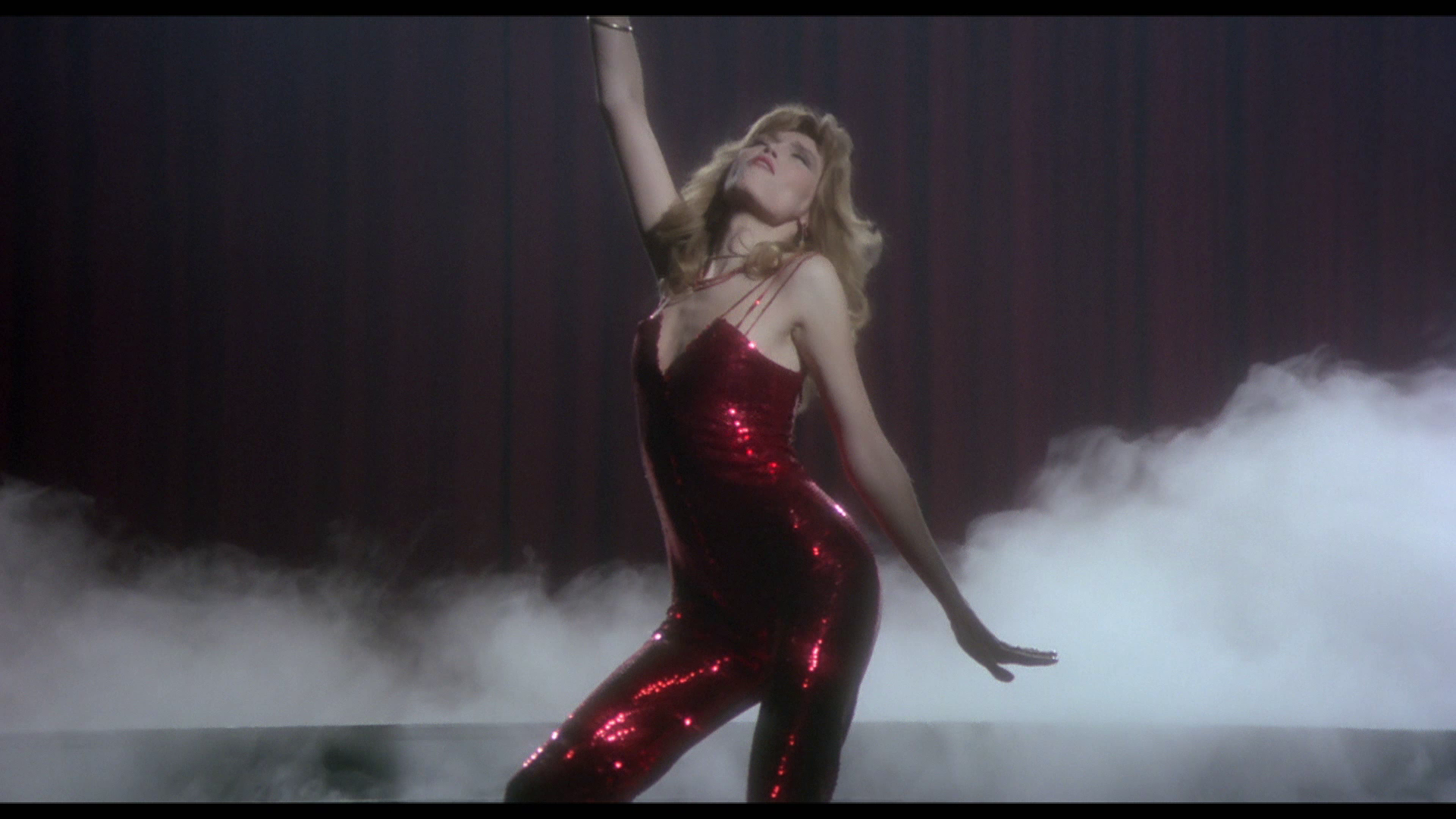 Full Moon says Crazy Nights is fully uncut and remastered from the original negative. The first claim is believable, the second claim not so much. The 1.85:1 presentation reflects a soft transfer from unrestored elements lacking strong texture and fine detail. The definition is weak, though clarity is fairly high with adequate black levels. It’s serviceable video quality for a 1978 Italian exploitation flick but this is not a top-notch transfer  from a restored negative. It has likely been sourced from an Italian telecine transfer struck sometime in the last decade.

The 1080p video has an adequate AVC encode on a BD-25. The main features runs almost 100 minutes. The film elements have minor wear and much heavier grain during establishing shots of the major cities. Colors are somewhat faded despite a boosted contrast. I doubt the video has been heavily processed even though high-frequency detail is minimal. Everything here screams an older telecine transfer made from secondary elements, maybe an internegative or theatrical print.

An English dub with minor sync problems is heard in 2.0 mono Dolby Digital and 5.1 Dolby Digital. The disco performances from Lear which book-end the movie sound fairly decent, a smooth mid-range with rougher high frequencies. The dialogue is a bit muddy, drowned out in volume by the English dubbing.

There’s not much to the surround mix, it’s mostly an excuse to slightly expand the front soundstage and spread the musical soundtrack out. This is a low-budget exploitation flick with ordinary audio at best and no substantial sonic problems. The LFE channel is barely present.

No subtitles are provided, a real issue for the magic act clip entirely in French dialogue. The scene primarily speaks for itself for anyone familiar with stage magic, however the English narration goes completely silent while the act continues in French. Crazy Nights was mostly intended for European audiences and D’Amato expected viewers would have passing familiarity with the French language.

Crazy Nights arrives on Blu-ray for the first time anywhere in the world courtesy of Full Moon Features, known more for their horror releases than vintage exploitation and erotica. The disc is coded for all regions.

Outside of some wild trailers, no bonus features are included.

Full disclosure: This Blu-ray was provided to us for review by the label. This has not affected the editorial process. For details on how we handle all review material, please visit our about us page for more information.