Maybe Unbreakable hits harder now, some 20+ years after its release, because the current comic book movie deluge so rarely separates from a formula.

Unbreakable still looks luxurious and exotic; nothing else in this genre approaches the visual design. It’s more a mood piece than origin story, pieced together by these characters among the real world, not amid fantasy. Watching the invulnerable David Dunn (Bruce Willis) leave the hospital after a tragic train crash, the waiting, hopeful eyes of other families wishing he was their own kin, is a haunting truth rarely dissected in superhero fables.

Dunn’s the hero. He doesn’t know that. Unbreakable details the discovery process, like Dunn lifting ever heavier weights in his basement. That’s typical, but more so, Unbreakable concerns Dunn finding himself and his place in a masculine-driven society. Rather than a football star, he quit to be with a woman, and that truth became a denial – a denial of self, leading to a loss of purpose in his life. Willis sensationally suggests as much indirectly, giving a melancholy performance of a man who’s never felt content.

Usually, the villain provides dimension to comic book-infused stories. Unbreakable’s does, to an extent. The focus however is on Dunn and why someone chooses to be a hero. It’s not inherently logical that every person who finds they can fly or punch bullets chooses either extreme heroism or villainy. For Unbreakable, there’s a certain indifference to Dunn’s choices.

There’s a single action scene to Unbreakable, where Dunn takes up vigilantism to track a predator. It’s a hideous, grueling sequence, honest in how terrifying and emotional such a scenario is, something other heroes casually dismiss. Worse, Dunn doesn’t win, or at least not entirely. Unbreakable makes a mistake in not following through afterward, but does solve Dunn’s story. He’s found himself, his goal, his meaning. There’s an enlightenment inherent to his realization, because Dunn isn’t a billionaire or sarcastic kid; he’s just a security guard, watching football games he should be playing in.

In that, Unbreakable is a movie about recovery. Some people handle this correctly, like Dunn. Others like Elijah (Samuel L. Jackson) drift toward resentment and ultimately, a cold, cruel lack of compassion. Bitterness fills Elijah’s life. He’s spiteful. Quiet. Withdrawn. A cliché comic book geek, who sees the medium as representing life. In doing so, Unbreakable gives the ink & paper medium a classiness that stands up for the stories told within its pages. They do contain certain truths. Sometimes, it takes remarkable people to show as much. 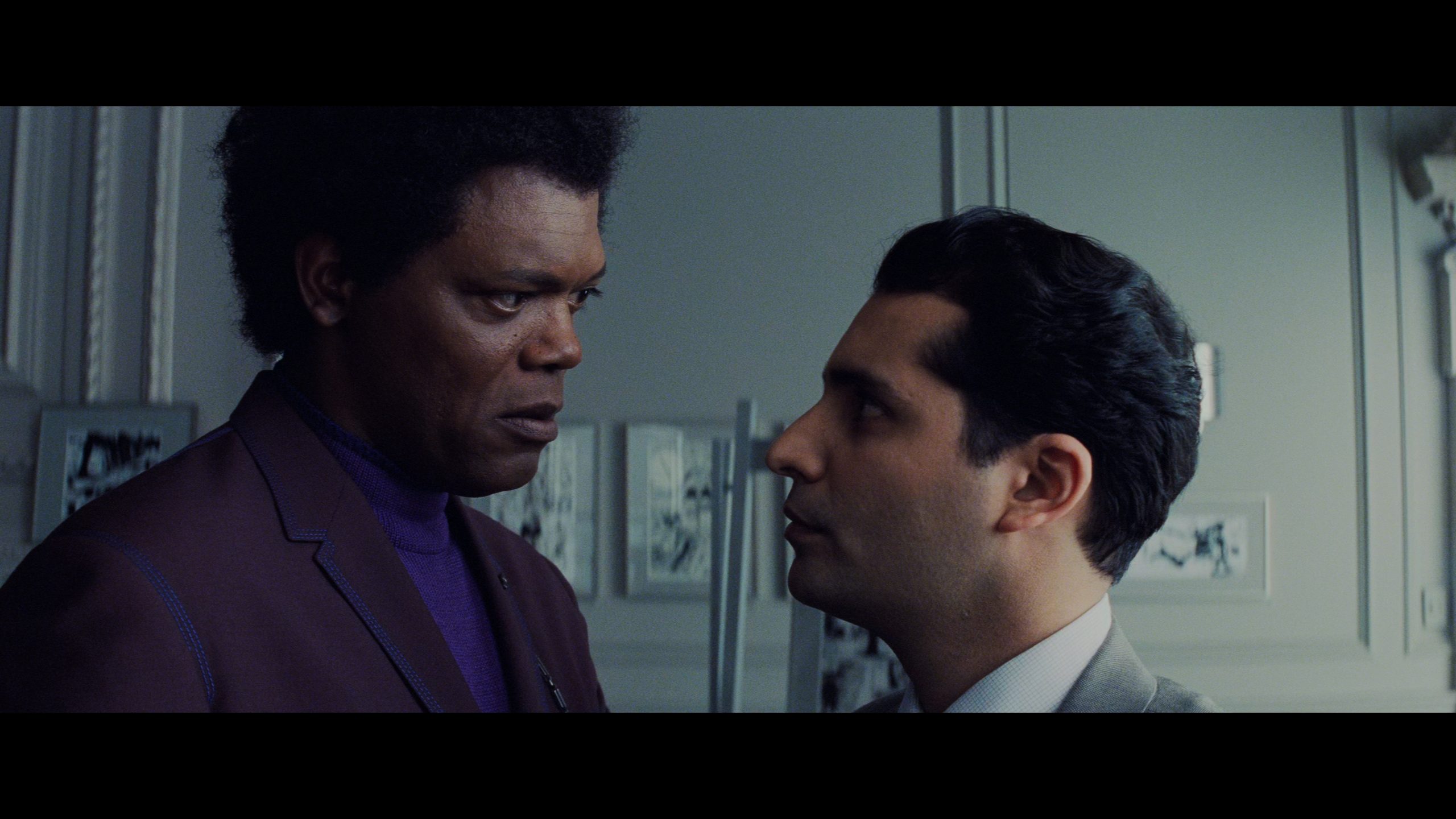 Disney’s overall master for Unbreakable is a bit iffy in spots. Some green screen effects dwindle the fidelity and that’s expected. Certain oddities don’t fit through. Watch the trailing grain structure on the screen’s left side around 11-minutes in. That looks like digital processing and/or grain reduction tools.

Yet, that’s not consistent. Most of the grain appears wholly natural, sharp, precise, and firm. A little edgy with a touch of ringing maybe, but organic in the sense of a film stock. What detail appears absolutely comes from a 4K master. It’s pristine, even glossy, showing notable improvement over the Blu-ray. Going for a vintage look, it seems chemical-style fades were employed. That makes a number of edits fuzzier than Unbreakable’s contemporaries.

Using a firm early 2000’s color palette, the richer density gives Unbreakable’s solid blues a gorgeous glaze. The production will employ odder moments with extreme neon-like effects (as Willis walks out of the hospital). That’s preserved and unchanged in this 4K debut. A few hyper-saturated moments stick out too, like when a young Glass heads outside to a park. Softer contrast keeps the HDR’s peak brightness sedated (and a teal push saps energy too), although the exquisite black levels make a dynamic difference, and the latter is essential to the look.

Unbreakable doesn’t erupt in a sonic sense, but does excel in driving ambiance throughout the runtime. It starts immediately, as the train rolls along the track, splitting the fronts and rears. Music inside Glass’ art gallery filters into the surrounds. Street level chatter and passing cars keep up the activity. Rain rushes through the soundfield precisely. At the stadium, crowds and a marching band find a home in each speaker.

Note this sounds like the same mix from the Blu-ray. It’s DTS-HD, and likely not remixed in any capacity.

Extras are basic, and identical to the previous Blu-ray (which is where the bonuses reside). Behind the Scenes is a self-explanatory and basic making of that lasts 14 minutes. Comic Books and Super Heroes is the best piece here, running 20 minutes and includes interviews with famous artists and authors.

Train Station Multi-Angle takes viewers through storyboards and the final form of this specific scene. Seven deleted scenes take at least a half hour to get through. Finally, a short home movie from Shyamalan’s early years is included and runs a couple of minutes.

A sensational, smart comic book story, Unbreakable is better now than on release.