The One with a Distinctive Chin

Tyrese Gibson plays the single most important character in the Fast series at this point. Vin Diesel and others bring marquee value, but it’s Gibson’s acknowledgment about the absurdity this crew experiences that lets F9 enter space – actual, above Earth’s orbit space.

F9 teeters on Transformers territory, where it’s a collision of bloated storytelling and utterly nonsensical action. Dumb, stupid, asinine, all of it without the class of a Bond entry, albeit in the same illogical ballpark. This story zigzags around the planet, exotic in its locales, while splitting the crew in almost untraceable directions. Who is where and why so rarely seems to matter, unless it’s Diesel clashing with his new on-screen brother John Cena.

Pro wrestling’s own tenuous logic pairs well to F9, and so too do these high-profile in-ring mega stars. Nine entries in and the Toretto clan keeps expanding, another eye-rolling scripting decision, if keeping some freshness filtering in.

The fear this time is a super-weapon, controlled by a mega-wealthy European who, yes, can control the world if he wins. Depth-laden this is not, although an exchange between said villain Otto (Thue Ersted Rasmussen) and a returning Cipher (Charlize Theron) offers a clever take on evil’s mindset. Otto firmly believes he’s in the right, comparing himself to Luke Skywalker. For a series built on anti-heroes turned absolute heroes, it’s an interesting character trait, if wholly meaningless by the end.

Family returns too of course, Fast’s standard tether to reality that more recently only seems to book-end each movie. Now with a son, Dom passes down his knowledge, ensuring future sequels while giving Dom purpose. In the midst of magnetically slamming cars together and destroying cities, his son never appears to matter. Certainly, Dom never shows doubt about grappling to falling bridge or flipping a multi-ton trailer onto his head. Seems obvious to call all of this hollow, but F9 is more so than even the norm.

But is it fun? In spurts. F9 is worth going back to, just to see things mindlessly explode, or watch people surf on skidding cars. It’s no different than punching torpedoes was in a prior sequel. The fat and countless ancillary characters though make F9 a tough go as a whole. 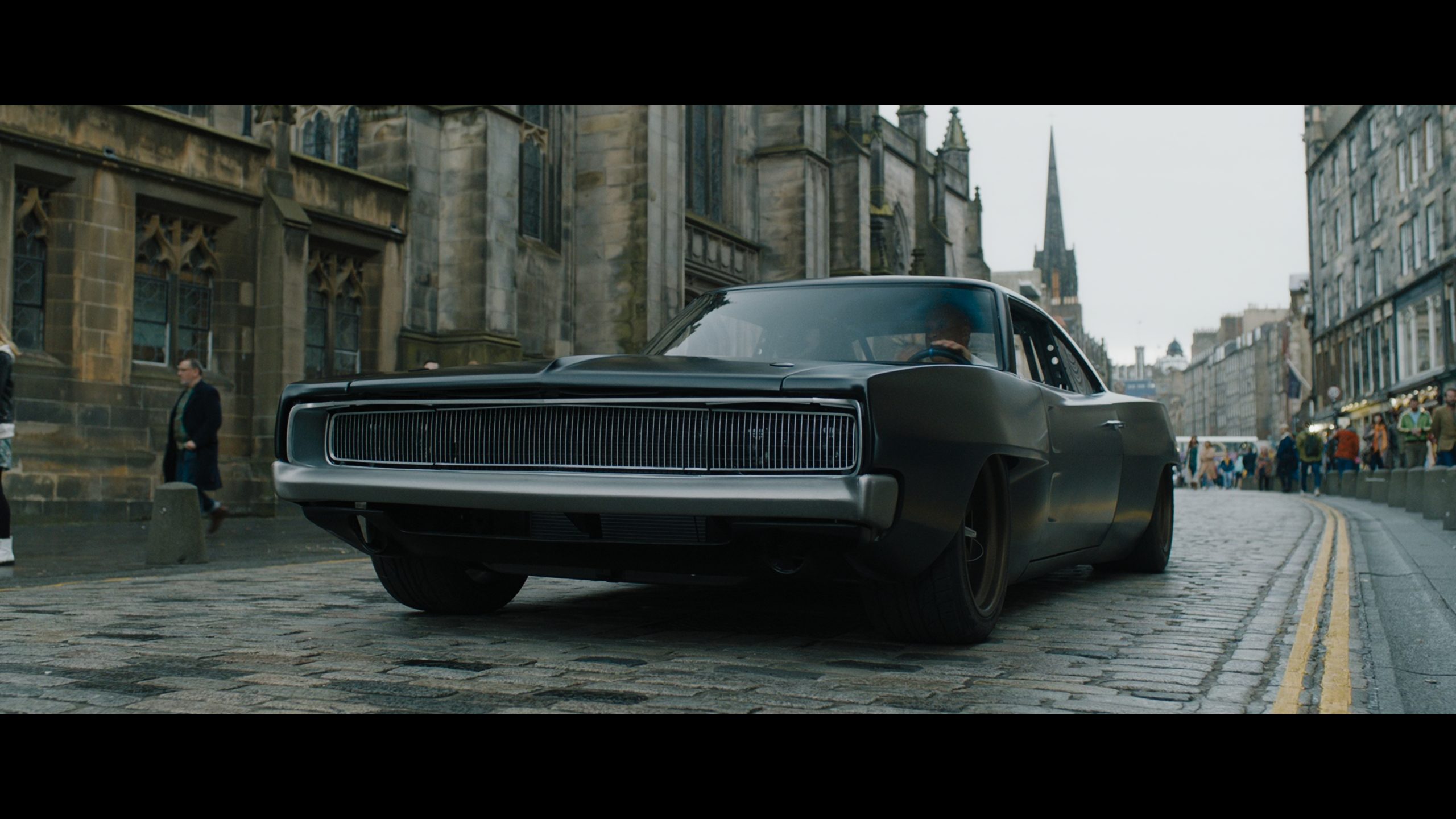 Hyper-dynamic in contrast, Universal’s Dolby Vision presentation is quite the stunner with its dimensionality. It’s glossy as possible, dropping spectacular black levels in every frame. Highlights from sparks, fire, and explosions spare nothing to achieve their highest intensity. Island sun balloons across the frame. Spectacular sights all around.

There’s also the color, raw eye candy and saturated to a point that’s near bleeding (never overreaching). Warmth is preferred in the palette, but occasional cool tones drape scenes where needed. It’s intense, pure Hollywood blockbuster stuff, and exactly the kind of eye candy this format was made for.

A 2K upscale, the softness from the digital source material is evident. Detail isn’t grand, but facial definition pops in close well enough. Wide shots lack the firmness from the best true 4K material, if still resolving things like landscapes and trees. Contrast counts for a lot, helping things look sharper than they are. As a bonus, clarity is unfazed by noise or other visual detractors.

No surprises here – F9 is an Atmos monster. Beefiest of the beefy. Boldest of the bold. An early trek through a minefield is a sign of things to come. Each explosion turns into a room-rattling monster. Car engines throb to the extreme. When in an action scene, the bass is a near constant, and brilliantly varied. Missile launches and gunfire do not hold back.

Equally spectacular, the wide soundstage pans and swirls and jumps through each speaker. It’s ridiculous in its accuracy and showmanship. Given the planes and/or helicopters usually involved, heights work overtime too. The effect is pure and sublime, easily reference material. Pick an action scene and go – aural magic ensues.

Justin Lin provides a solo commentary on the UHD, which also carries the other bonuses as well. The menu begins with a gag reel that runs three and a half minutes,. Nine featurettes total 45-minutes, fairly generic in their EPK-esque quality. A look at the practical stunts and effects falls just short of eight minutes, and it’s surprising how much was done in-camera. A brief bit on Dom’s relationship with his son hits four-minutes. Han’s character is explored in an even shorter extra. John Cena’s obsession with cars take a tour through a garage of sorts for the film.

The next 10-minute bit follows Justin Lin through his daily routine. It’s the most insightful thing on the disc aside from the commentary.

To space they go, and thankfully F9: The Fast Saga carries enough of a self-aware wink to make some of the absurdity tolerable – but not all.