Narek on the Other Side

Note: This Blu-ray is exclusive to the Disney Movie Club

With the Disney touch, Watcher in the Woods plays to the studio’s usual audience, a mostly quaint horror fantasy, loomed over by Bette Davis. She is, of course, incredible as the brooding Mrs. Aylwood, part fearful villain, part wounded mother. Davis towers over her co-stars to a point that when without her, Watcher in the Woods isn’t much.

At one time, Watcher in the Woods ran 100-minutes. In every home video release, it’s only reached a truncated 84. The same goes for this Blu-ray debut. Whatever the additional content, the story recalls Poe’s The Raven as people continue to see a dead girl and fear someone else might as well. There’s the iconic Universal horror touches too, from a mansion to the lightning storms and dark corridors.

There’s limited depth to anything in Watcher in the Woods

Watcher in the Woods is primarily seen through the eyes of Jan (Lynn-Holly Johnson) and her terror as her family’s new house begins inciting visions. To pre-teens, it’s likely a lot, transferring the anxiety of a move into a supernatural unfamiliarity. There’s limited depth to anything in Watcher in the Woods though; all of this occurs superficially with the occasional burst of visual effects to liven things up.

In its most memorable moment, Bette Davis seemingly traps Jan under local waters. In the manic cross-cutting and screeching score, it’s Disney’s Psycho moment. Also, that sequence is impossibly crucial in transforming Davis from a stock horror cliché and into a misunderstood, tragic figure.

Multiple alternate endings were shot, suggesting not even the studio knew how to build this climax. What’s in the finished product is terrifying purely for its volume and use of light. A cult-like atmosphere builds among the minuscule cast, a restrained scale held over from Watcher in the Woods’ intended TV-movie origins. It’s marginally exciting, but then it’s just… over. There’s no genuine emotional resolution, everything seen from afar as the screen drops out to black. The connection to the viewer is missed, costing Watcher in the Woods, leaving the film a forgettable footnote. 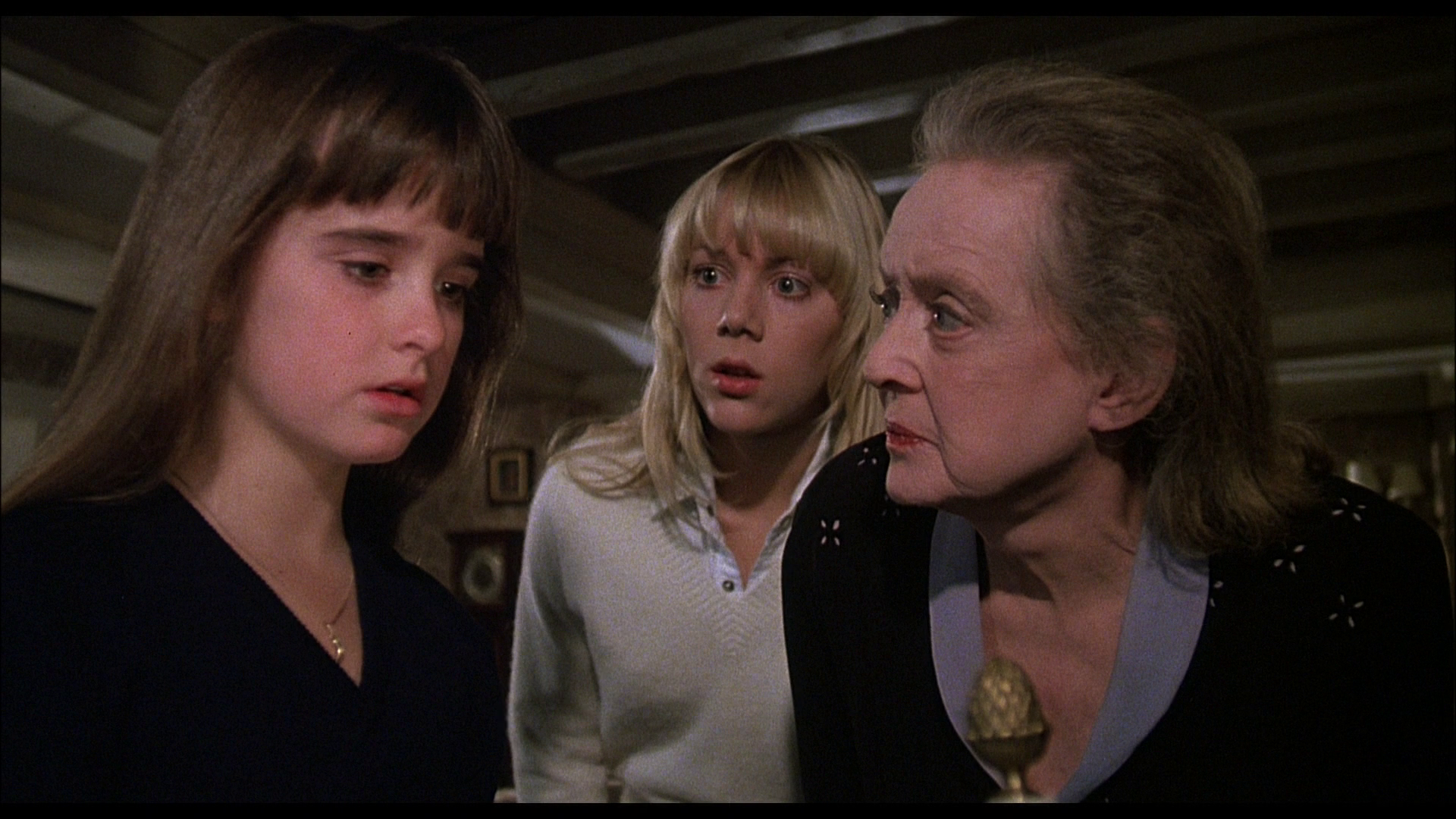 While the master itself appears somewhat recent and well done, the print utilized is on the messier side. It’s in need of scratch repair. The number of nicks and dings, plus dirt and debris, show signs of limited attention placed on this restoration.

Disney preserves the grain structure, natural and firm in its presence. Compression routines keep the few spikes calm. There’s no sense this is a digital image – Watcher in the Woods looks wholly filmic. That means detail within the steamier cinematography, never eye-popping, but impressive in accuracy.

A slight fade to the color matters little. Hazier primaries give Watcher in the Woods a pleasing vintage aesthetic, leaving the original hues intact. Yellows and greens stand out, not incredible, just satisfying. This goes along with decent black levels, often just a notch off from pure black, and potent contrast.

Only available in Dolby Digital, the compressed stereo fares fine. Each element is balanced, with the higher treble on the raw side. Separation between the channels is mild if noticeable. For instance, cars drive out of frame, passing between the stereos.

Disney actually includes extras for this Movie Club exclusive. Alternate endings first, and then previously unseen alternate opening titles. Not much, but it’s something.

The Watcher in the Woods