One Dark Night is a wonderful horror relic from the VHS era starring Meg Tilly and features Adam West in a small role. Probably best known for Friday the 13th Part VI: Jason Lives, director Tom McLoughlin stages one of the wildest and most epic finishes in all of horror from the 1980s. The creative supernatural shocker isn’t a great film by most standards but pushes the right buttons for genre fans into retro scares and psychic terror.

The underrated 1982 chiller boasts a haunting score, superb atmosphere, and an effective cast despite the limited budget. One Dark Night’s biggest issue is that the first two acts are a slowly burning tale of mean girls picking on a recruit. Some fright fans may have already checked out by the crackling finale packed with incredible thrills and a few nasty twists.

A PG rating hints at one of One Dark Night’s underlying weaknesses. There is little excitement in the turgid screenplay before the shock ending. The action generally stays away from the type of graphic gore and sleaze most horror fans had started expecting by the 1980s. In its place are a few well-done set pieces with creative visual effects, set inside the same L.A. mausoleum made famous in Phantasm.

“Good girl” Julie (a young Meg Tilly) hopes to join a cliquish group of female students. Kitty (Leslie Speights), Leslie (E.G. Daly) and their mean girl leader Carol (Robin Evans) toy with their newest recruit. They tell Julie she must spend one night by herself in a spooky mausoleum if she wants to join them. Little do they know a powerful psychic has just been buried in a crypt there, dying in a bizarre experiment which may have unleashed unspeakable terrors. The psychic’s estranged daughter is warned her father was planning to return from the other side.

One Dark Night may be a product of its time but that’s not a problem if you can handle its slowly developing story. The creepy atmosphere and a powerful final act, filled with great practical effects for the day, stand out from ’80s horror. The memorable flick punches above its limitations for a satisfying and frightening experience. 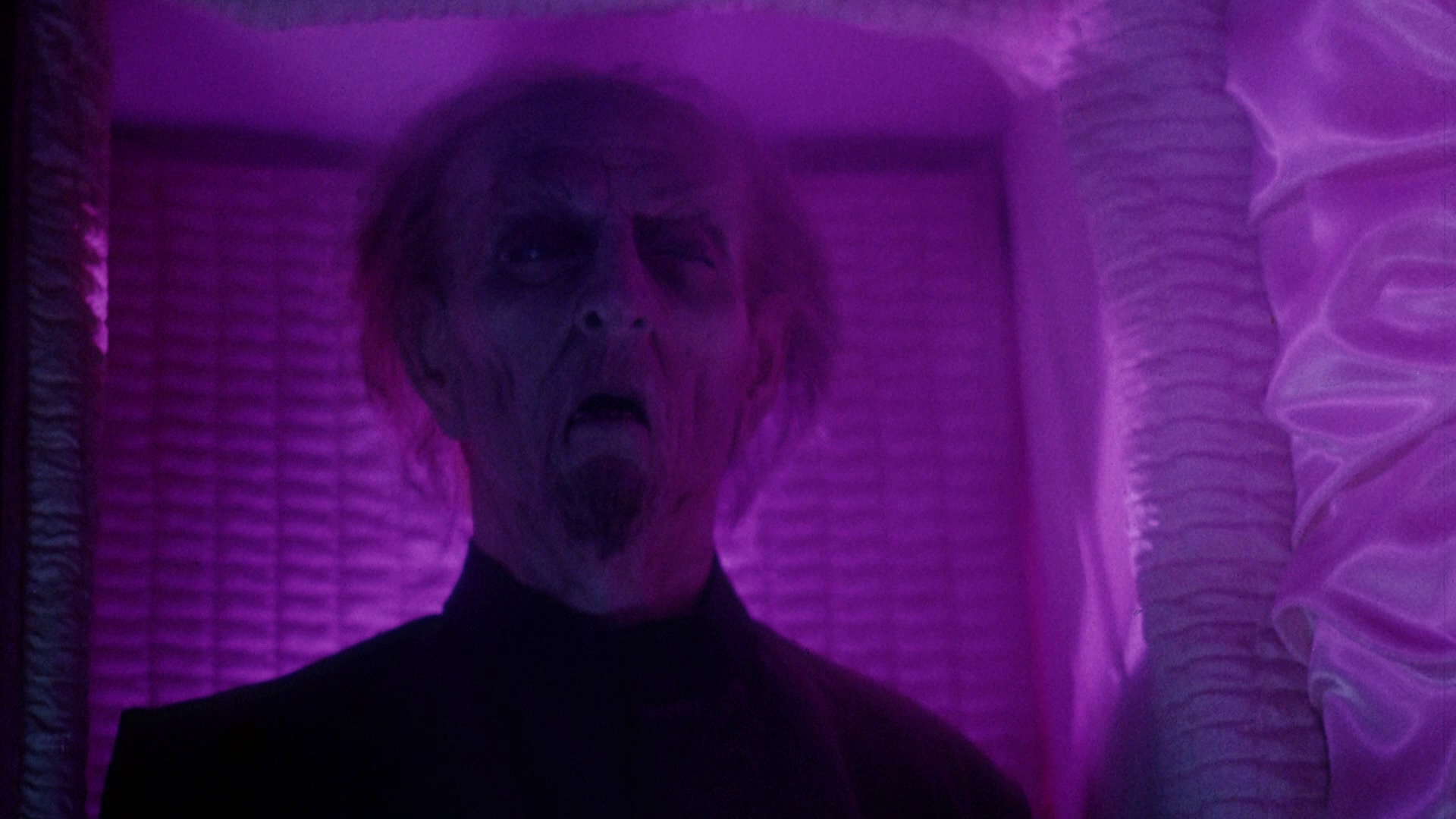 One Dark Night was released back in 2017 by Code Red with a fresh HD transfer. MVD reuses that same presentation here in largely identical 1080p quality. Those expecting a top-notch film transfer from pristine elements should keep their expectations in check. The color grading is brighter and more saturated than the older transfer used for the Region B Blu-ray.

The 1.78:1 presentation boasts a boosted contrast and mostly vivid color palette, struck from secondary film elements with some obvious damage. Vertical gate scratches, emulsion problems and other wear manifest in the unfiltered and mostly unrestored movie. Black levels aren’t perfect but shadow delineation largely holds up in the toughest scenes.

The theatrical cut runs an uncut 89 minutes here, encoded in transparent AVC on a BD-50. This is soft Hi-Def video with decent clarity. Definition isn’t outstanding but the 1982 horror movie has never looked better. It’s a real improvement over DVD. There are no serious technical issues in the largely unprocessed film transfer.

One Dark Night’s original monaural soundtrack is heard in fine 2.0 PCM. The foreboding score from Bob Summers rings with atmospheric tone and presence. The occasionally robust audio reveals some of the inherent budgetary limitations with the creepiest scenes lacking power. Dialogue is thin but intelligible. The effects are rather typical horror fare from the 80s.

Optional English SDH subtitles play in a white font for both the theatrical and workprint versions.

One Dark Night is a Multicom property and has made the rounds before on home video from several different distributors, going all the way back to Media Blasters on DVD in 2006. This collector’s edition is #32 in MVD’s Rewind Collection.

The Blu-ray arrives with a reversible cover, a slick fold-out poster reproducing the original movie poster, and an awesome slipcover designed with faux VHS artwork. The disc itself is almost entirely a rehash of Code Red’s excellent 2017 Blu-ray release, adding English SDH subtitles as really the only new “feature” found on this release.

It wouldn’t be an MVD Blu-ray without a small authoring issue. The interview with special effects artist Paul Clemens can only be accessed if you pick the “Play All” option. Picking the Clemens interview directly plays the interview with producer Michael Schroeder.

The special features cover a wide range of behind-the-scenes topics and the two archival commentaries are solid discussions without a lot of repetitive material. This wasn’t an easy production as the budget was slashed while filming and final editing was taken out of the director’s hands. There is a lot to enjoy here for the cult film’s many fans.

Alternate Director’s Cut of One Dark Night (89:55 in SD; 2.0 Dolby Digital in Mono) – A rough workprint version from director Tom McLoughlin with a few somewhat minor alterations from the more well-known theatrical version. This presentation is in poor condition and only hardcore fans will be interested by the changes.

Interviews (All in HD):

One of the most memorable finishes from ’80s horror turns an average genre flick into something special.