Toy Soldiers may have been released in the 1990s but it has the 1980s written all over its macho action and teenage high jinks. The ridiculous premise has a group of cutthroat terrorists taking over an all-boys prep school and a group of students fight back with the aid of the FBI.

The R-rated action thriller may not be believable but its non-stop thrills and credible suspense add up to a good time. It’s a pure guilty pleasure made for adolescent teens. Surprisingly well-constructed if you ignore some of the hammier aspects and implausible plot developments, Toy Soldiers is old-school action mayhem wedded to rowdier teenage flicks from the 1980s. If you are looking for teenage protagonists fighting terrorists with smarts and guile, this is it.

The excellent ensemble cast stars a young, pre-Rudy Sean Astin and Louis Gossett Jr. Supporting players include R. Lee Ermey and Wil Wheaton. The big minus in the cast is Wil Wheaton, playing the son of a powerful New Jersey mafia don. There are good reasons why his career went nowhere after Star Trek. By comparison, Sean Astin steals the spotlight from his adult co-stars. Playing an unrepentant troublemaker, Astin leads a small group of troubled boys right under the noses of his captors.

A group of Colombian terrorists run by a drug cartel thug named Luis Cali (Andrew Divoff) are desperate to free Cali’s father from the Federal government. Their plan is taking the Federal judge’s son hostage until he agrees to free the drug kingpin. Bringing in major firepower and heavy artillery, they easily take control of the Regis School For Boys. The violent men mean business and inform the student body a head count will be held every hour and if anyone goes missing, five students will be executed.

The wrinkle Toy Soldiers neatly throws into its hokey plot is several students have powerful, wealthy, and most importantly, connected parents. One boy’s father is a Senator while another is a banking scion. The rag-tag group of young troublemakers, always a problem for their stern headmaster (Louis Gossett Jr.), now pose a challenge to the terrorists from the inside. Life-and-death stakes are on the line as the school becomes surrounded by a full-fledged military response sent in personally by the President.

Toy Soldiers is what it appears on the surface – a violent, cheesy and slickly entertaining action flick if you overlook Wil Wheaton’s stiff performance and several implausible plot twists. 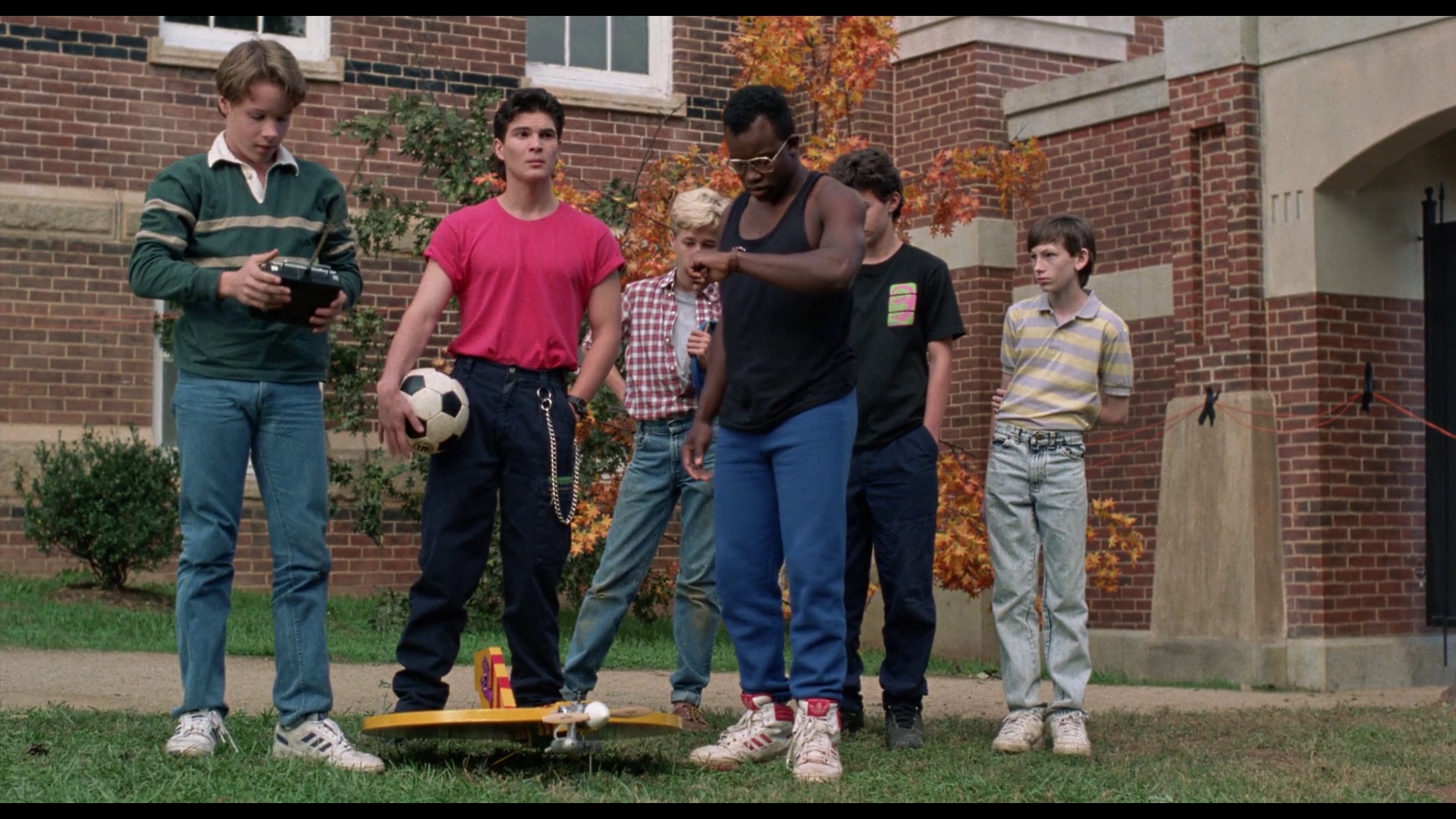 For years and years, fans of the movie were stuck with a terrible, pan-n-scan 4:3 DVD from Sony as the only home video release in North America. Back in 2018, Sony themselves finally released Toy Soldiers on Blu-ray in a fairly pleasing 1.85:1 presentation. The new HD transfer demonstrated solid clarity and definition for the 1991 film. Mill Creek has licensed Toy Soldiers and the earlier Sony transfer for this double-feature BD.

The only substantial difference in video quality between the Mill Creek and Sony discs favors the better AVC compression found on the Sony release. That’s largely due to Mill Creek cramming a second movie on a BD-25, resulting in mediocre bitrate parameters. This disc isn’t littered with artifacts despite the unimpressive encode. Grain reproduction is rather adequate with a transparent, organic appearance.

It’s not a huge qualitative difference but videophiles wanting the absolute best presentation should get the earlier Sony BD. Bargain bin shoppers should be happy with the serviceable Hi-Def presentation from Mill Creek.

The transfer is from relatively well-preserved elements, likely a 2K scan from the camera negative with minimal processing. Flesh-tones are naturalistic and a bright palette maintains enough saturation for primary colors. The 1080p video is sharp in exteriors with stronger depth and dimensionality. Interiors resolve shadows decently with acceptable black levels. It’s definitely a huge improvement in all picture attributes over the woeful DVD.

It’s a basic but mostly effective stereo mix with occasional depth. Gunfire and explosions miss rocking the house with a separate LFE channel. Dialogue is cleanly intelligible over the passive sound design. A serviceable score and mild action effects probably stand out the most. Ordinary but perfectly respectable audio for an action thriller from the 90s.

Technically this is a double-feature BD from distributor Mill Creek with another early ‘90s movie set in a prep school which happens to feature Wil Wheaton. December is an unrelated film thrown in by Mill Creek, presumably to set this disc apart from Sony’s earlier and superior Toy Soldiers BD from 2018.

The back cover claims the BD is coded for Region A. Don’t get this double-feature looking for a watchable December (1991) in Hi-Def.

December (91:28 in HD; 2.0 DTS-HD MA w/ optional English SDH subtitles) – Possibly the most unwatchable transfer ever put out by a reputable label if you count Mill Creek in that category. The 4:3 presentation reeks of an obsolete transfer derived from standard definition DVD with hideous compression artifacts thrown in for good measure.

Set in a New England prep school on the day after Pearl Harbor, five close friends must choose whether to stay in school or go to war. Their decisions force them to grow up faster than they could have ever imagined.

A young Sean Astin outshines the veteran cast in this ridiculous but fun action thriller from the early 1990s.