In the 1970s, the prison drama became an exploitative embarrassment. Women (mostly) were treated as props to beat and torture, eventually fighting back against an evil warden. The sub-genre’s legitimacy was gone. Shawshank Redemption used every cliché – prison rape, misanthropic guards, the cruel warden – and never once fights back. Physically, anyway.

Shawshank Redemption revitalized the idea of prison cinema, still visually locked inside frigid concrete walls, still filled with violent people, and still trapping innocent people. It’s a somber, beautiful fable, inspiring were it not so unfortunate, about doing right for others. One person with the will changes the entire dynamic.

The typical hero takes up arms against their oppressor. Maybe they bond others together over the urge to strike. Shawshank Redemption instead dismantles a broken system. Although Andy (Tim Robbins) and Ellis (Morgan Freeman) are the central protagonists, Shawshank’s most important character is Brooks (James Whitmore). He’s a kindly, gentle librarian. Lovable, even. Yet his release brings a panic, a terror, and a cruel fate.

Brooks is what could become of Andy or Ellis whether they stay inside the walls or leave on parole. It strains the rest of Shawshank Redemption, because in control as Andy seems, suddenly, as Brooks cannot survive despite his jovial demeanor, this is anyone’s end.

It’s easy to cast a hero against an obvious villain like Warden Norton (Bob Gunton). Shawshank’s difference is the complexity, breaking from the complacency and simplicity. Andy is as intelligent as this nuanced script, a man who fights when needed to defend himself, but otherwise cautiously manipulates a corrupt system to his advantage. Where Norton hypocritically preaches the Bible, Andy lives by it – insofar as he can.

Prison becomes about routine: draining, debilitating routine. Not rehabilitation, just wasted time. The cruelty comes partly from the brutal beatings by guards, but primarily the inanity of this life. That’s the true torture. Whether Andy is innocent or not, Shawshank Redemption makes that immaterial to the grander story or even his character. This movie sets out to deconstruct the bitter glamour established by preceding dramas, using Andy’s genuine empathy to warm this fenced off existence.

When Andy “wins,” it’s not elation. Satisfying, but not worth cheering for. In two hours, some twenty years passed. A precious resource – the most precious – is lost to good men. The system succeeded in using prisoners for corrupt labor, presented with a smiling face to the public. Media, movies included, makes it too easy to dismiss the incarcerated as sub-human. Shawshank Redemption gives them a humanity so often buried under a mountain of violence. 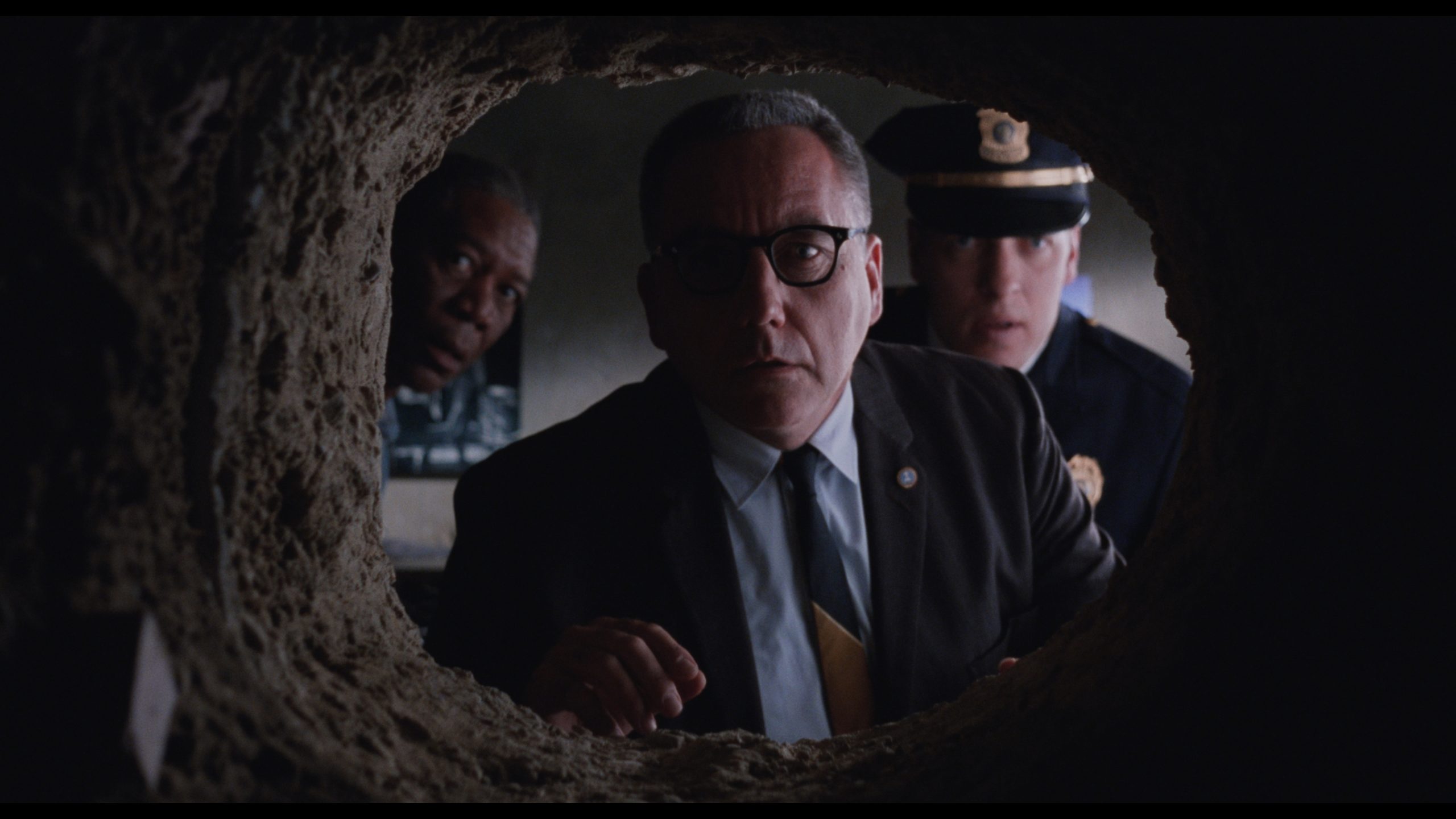 There’s a notable digital push to the color in this new master. It’s evident immediately when Freeman first steps into the prison yard. Not that Shawshank Redemption ever oozed glorious primaries, but the orange/teal tint comes entirely from an era later than the original 1994 release. To an extent, it fits the gloomy mood, but doesn’t appear organic to a film stock at all. When/where primaries factor, they look superlative, especially the guard’s deep navy uniforms.

Flush with detail, the added resolution looks stellar when it comes to resolving the finest textures. Close-ups push detail in droves, whether skin or clothing texture. Wide shots of the prison yard define mud and brick, keeping the extras visible and identifiable no matter the distance. Cinematography steers toward the softer end, so the sharpness doesn’t match up to other catalog discs, but that hardly matters. It’s accurate and pure, resolving the mild grain structure sans problems.

Left alone in DTS-HD, the 5.1 track offers sharp ambiance to the prison’s many echoes. Shouting and metal doors reverb through the surrounds. Dialog stretches the fronts on occasion. A rough bout of dialog in the opening trial scene (from the opposing lawyer) is the only fault of note. For whatever reason, his lines carry a distracting static, as if played back on a radio.

Accentuating LFE assists the score. Claps of thunder jolt the subwoofer as Andy smashes a rock on a pipe. Nothing room-shaking, but enough to feel.

On the UHD, Warner ports Frank Darabont’s commentary, which is also on the Blu-ray – the same disc as before. Shawshank Redemption is long overdue for a massive special edition, so this is a disappointment. A 31-minute retrospective comes from the dawn of DVD. A more all-encompassing making-of lasts 48-minutes. A Charlie Rose roundtable from 2004 features Robbins, Freeman, and Darabont, running 42-minutes. There’s a 24-minute parody afterward, and a stills gallery as the end point.

Shawshank Redemption legitimized the cliche prison movie, created indelible characters, and tore down a system by staying ambivalent toward violence. A masterwork.