After three serious, potentially galaxy-altering events, Star Trek IV lets the Enterprise crew settle down. Star Trek IV doesn’t work unless the characters do, or have the necessary build-up. It’s an odd, at times goofy sci-fi comedy – and the best of Star Trek.

Although Earth’s destruction is near, the script toys with fish-out-of-water comedy (almost literally). If there’s an equivalent, it’s Escape from Planet of the Apes, which after vaporizing Earth, the script implausibly sent the apes back into (then) current America. Cue antics after two devastatingly potent, cruel social parables.

It’s weird, yes, imagining a solution that involves stealing whales through time so the mammals can communicate with aliens. Yet, to Star Trek IV, the logic fits. In their future, Kirk and Spock no longer have whales on Earth. Not protecting them led to near cataclysm. Using whales to symbolize climate-based extinction provides a wacky answer to a complicated scenario, and still connected to the grander story arc.

Seeing Spock work through a culture he doesn’t comprehend proves a delight, a generous, comic success, which brings light to a steadfast and certain personality. Spock adjusts, partly because of his book smarts, but also for his well-honed improvisation, a sort of Beverly Hills Cop in Star Trek where Shatner takes over for Eddie Murphy.

Always considered the headier series compared to a Star Wars, there’s a definite offensiveness to treating these iconic characters as out-of-place oddballs. Or rather, there could be, had Star Trek IV not cautiously maintained gargantuan stakes for the crew. That they play up their roles only hides their uncertainty as they pretend to be in control. 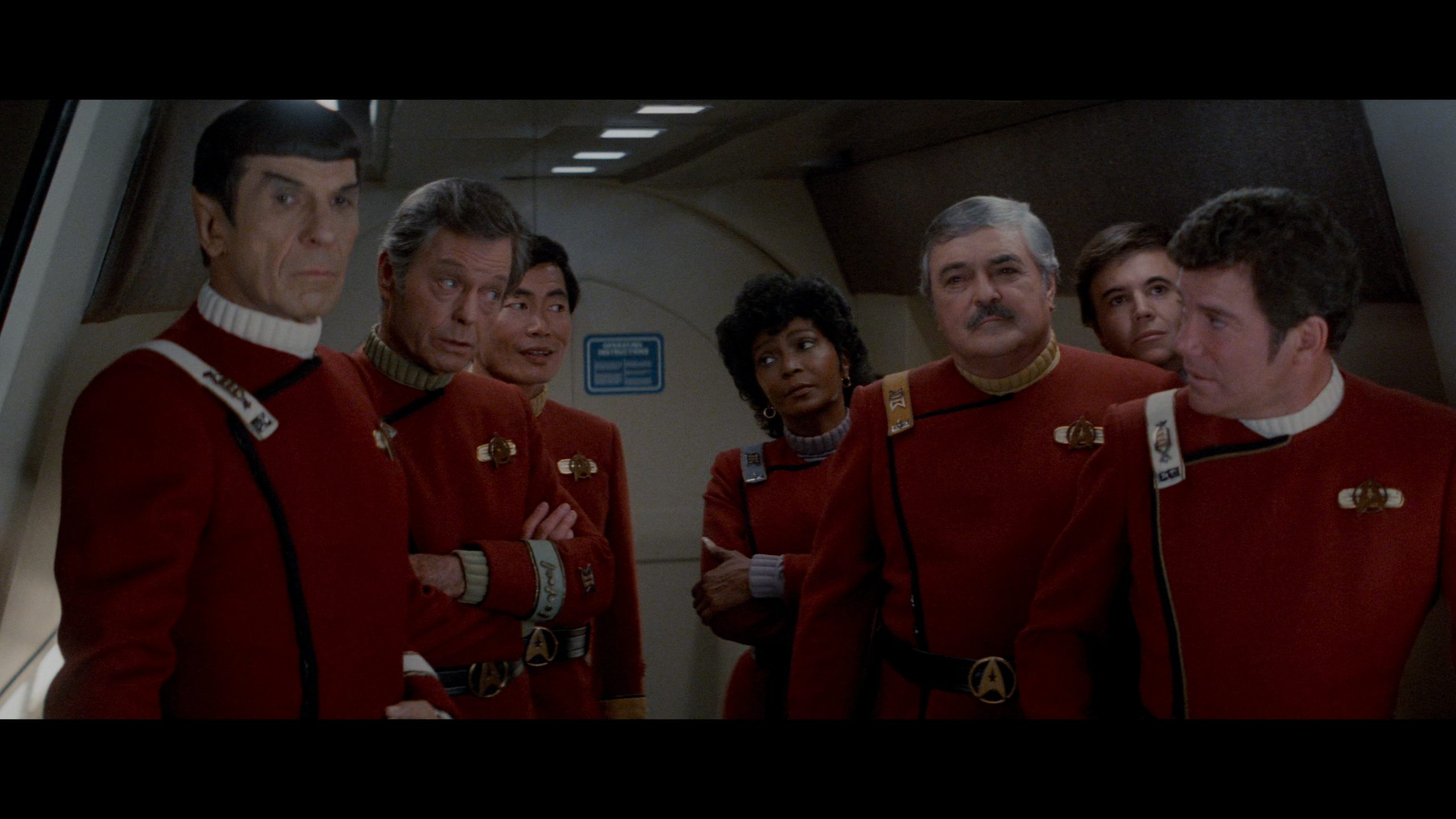 Of the four Star Trek films in this UHD collection, Star Trek IV looks the most accurate to the 35mm stock. While encoding struggles against the hazier, smokier cinematograohy in spots, the clarity excels considering the thicker grain structure. Better, the filtering apparent within the previous transfers is gone, leaving no smearing or unnatural glossiness. Oddly though, it’s the least detailed of the four, but blame the source material. Texture isn’t lacking by any means, rather not as precise.

Command screens on board the ships produce superlative color saturation. Primaries bloom. A few shots of Earth from space present ocean blues at their most gorgeous. Flesh tones pose no issues, and density in other colors (like red Federation uniforms) show dazzling, natural purity.

Generous without being overbearing, Dolby Vision highlights control panels, stars when against space’s strict black, and other such sources. It’s dynamic, but doesn’t draw attention to itself. Shadows push full black, albeit with careful nuance. Crush doesn’t cause problems.

Well formed ambiance aboard ships keeps a sense of space moving. Engines hum as characters speak, and computer panels bounce between the stereos where needed. Stormy weather on Earth sends rain and thunder into the surrounds. It’s consistently active and spacious, easily the best of these four.

LFE drops from the thunderstorms and the whale sound-producing ship. Weight is satisfying, still vintage, but enough to bring Star Trek IV into the modern audio era. When Kirk’s crew time travels, the air pressure builds a sustained power in the subwoofer, this as the ship erupts, spreading metal and glass into the rears.

William Shatner and Leonard Nimoy join up for one of two commentaries on the UHD. The other puts Robert Orci and Alex Kurtzman in the booth.

The Blu-ray has them too, but also everything else. The Library Computer pop-up feature returns, running alongside the movie. Five production featurettes detail various elements in the production, even one on Chekov himself. Seven more featurettes explore various Star Trek lore. Two more detail the visual effects. Interviews, two tributes, galleries, and trailer complete the set.

A playful delight with genuine global stakes, Star Trek IV is the easiest watch of the series and arguably the best for it