As a direct sequel, few handle the transition between films better than Star Trek III. The script opens during a mourning period for Spock (Leonard Nimoy) and the soon-to-be decommissioned Enterprise. Those changes are dramatic shifts to Star Trek lore, while anchoring the Enterprise crew as more than a command chain. It’s evident how close Kirk (William Shatner) is with those around him, and the unfailing trust they place in his hands.

It’s also critical not to let the life-creating Genesis device go, as if a mere plot element. The introduction of such an inevitable weapon alters Starfleet as a whole, while bringing with a target for Klingons. Building on Star Trek II’s fears, Starfleet chooses to bury and not speak of this technology, worried about their reputation. Star Trek III drops the political intrigue all too soon, although this gives weight to Kirk’s decision to set off toward the planet, hoping to find his friend.

Star Trek III feels and looks smaller in scale. It is. The Enterprise crew is minuscule for a reason, and their threat an equally tiny Klingon force. Yet, this turns more personal, less about saving a galaxy than saving a friend in an effort to differentiate between human and Vulcan kind. If Star Trek II concerned the Vulcan’s purest logical thinking, Star Trek III capably finds the alternative view, where one individual can matter to the greater.

Thematically powerful as Star Trek III is, time spent away from the Enterprise crew causes a soggy pacing, led by a recast Saavik (Robin Curtis) whose journey on a rapidly developing planet fails to convey the unity or tension. Worse, their journey isn’t interesting as standard Hollywood screenwriting cannot let an iconic character die, so their success is certain.

While not a dud, Star Trek III clumsily rolls forward, unraveling the emotional toll from Star Trek II. The attempt is too forward-looking, considering the next sequel rather than the one happening in the now. Shatner’s performance is among the best of his Star Trek outings as he visibly wears a loss he blames himself for. That matters, but the moments separated from Kirk and his crew costs the film its soul. 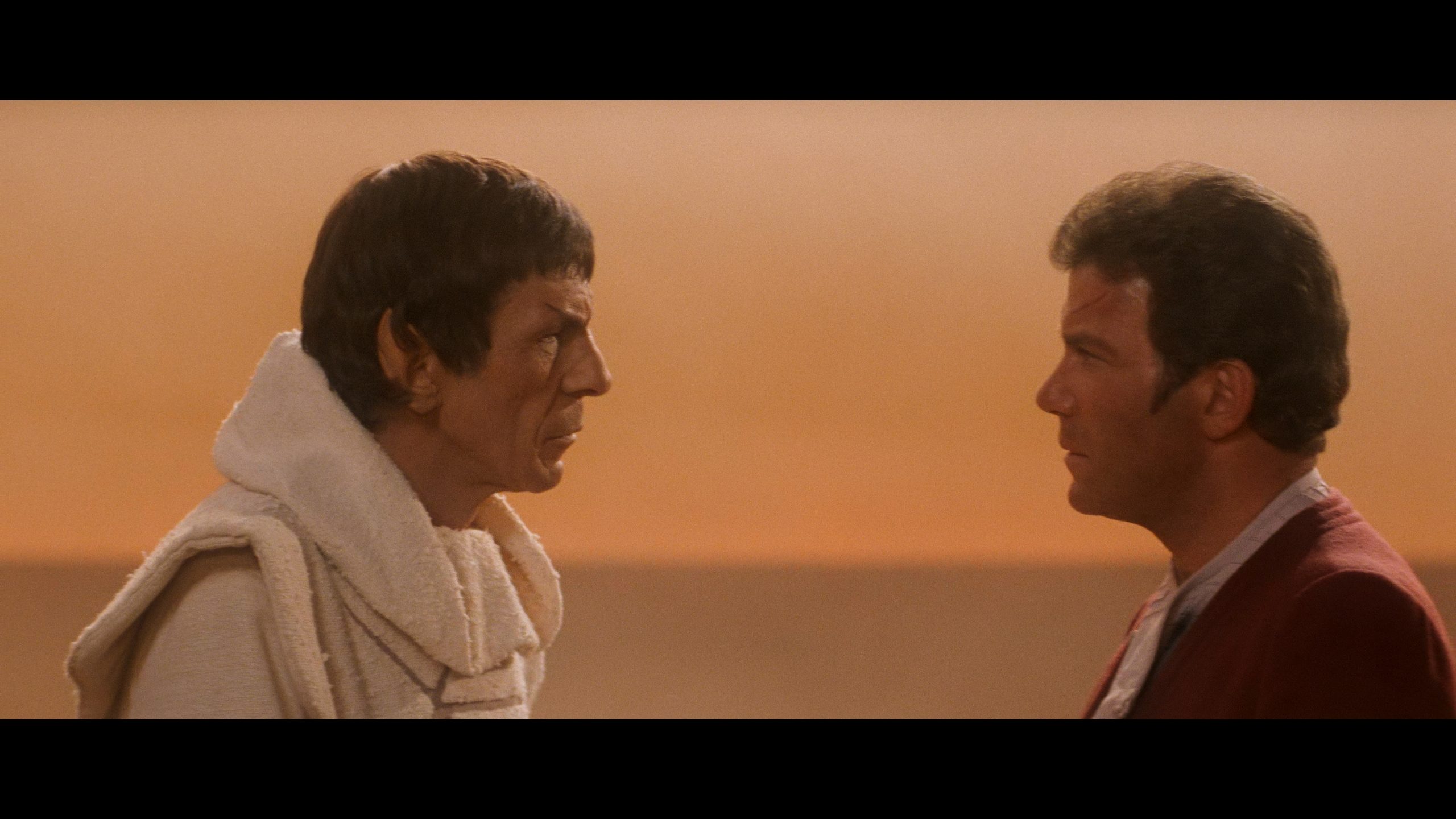 A decent if unspectacular effort from Paramount, which succeeds when compared to the earlier Blu-ray, but not against the current UHD standards. The plus is a firmly controlled, preserved grain structure. Paramount’s encode does well to maintain the film stock’s integrity. What doesn’t is the fuzzier mastering.

Evidence of light filtering adds an oily glaze over the imagery, and at times, a minor smearing. It’s possible to detect a slight “tug” as actors move around or the camera pans, grain stuck in place behind them. This all pinches detail, reducing the fidelity and sharpness. Star Trek III is by no means a travesty, rather a disappointment considering the potential. While both Star Trek and Star Trek II showed limited signs of manipulation in 4K, those choices are most apparent here.

Dolby Vision pleasingly adds punch to the shadows or depth of space. Stars and suns glow against the raw black. Primary colors produce a definite density, wholly natural too. Accurate flesh tones pair with the other eye-catching hues.

Ship engines generate a decent low-end response inside this TrueHD track. Certainly of its age, but prominent, heavy, and thick. A couple of explosions produce a pleasing bump, as do some earthquakes.

Pure dialog sounds fresh, almost new. James Horner’s score adds a richness to the soundtrack, which makes up for lackluster separation. Passing starships exhibit little motion through the soundstage, and those additional rears in the 7.1 upgrade rarely find use. Some ambiance on Genesis drives wind and storms around, at least offering some directionality.

The rest is on the Blu-ray. That begins with the pop-up feature Library Computer that offers bonuses alongside the movie. Four featurettes on the production run through the basics like the script and visual effects. Five featurettes explore the wider Star Trek universe from the props to lore. A stills gallery and trailers bring about the finale.

A clumsier entry, Star Trek III tells a fantastic story continuation, but lacks urgency in the narrative to convey the desperation of these characters.