Hailing from Europe, Dreambuilders owes a massive debt to Pixar’s Inside Out and Monsters Inc. The CGI animated Danish film visits the dreams of a pre-teen girl coping with the addition of a new step-sister. Changing family dynamics provide the emotional grit necessary for a sweetly imaginative, coming-of-age tale aimed at pre-teen audiences with laughs and fun characters.

Director Kim Hagen Jensen cut his teeth working for famed animator Don Bluth back in the 1980s and it shows in the rich Dreambuilders. The animated movie’s premise builds on familiar tropes with creativity and earnest storytelling. Minna is a young girl who learns everyone’s dreams are big stage productions pulled off in a dream world. A menagerie of fantastical creatures behind the scenes create them known as dreambuilders.

Minna’s life with her father is disturbed by his new marriage and an annoyingly bratty step-sister Jenny. Minna begins using her new knowledge with the help of a friendly dreambuilder, surreptitiously making changes to her family’s dreams with unintended consequences.

Minna meets the friendly Gaff, the “director” behind her vivid dreams. Going behind the scenes, Minna learns dreams can be manipulated and change how people behave in the waking world. Hoping to change her new step-sister’s bratty ways, things go horribly wrong and Minna traps Jenny in dream sleep.

Dreambuilders has all the trappings of a modern family flick made for children, including a charmingly adorable pet hamster named Viggo who plays a large role in the simple plot. Enjoyably refreshing with good intentions and likable characters, it’s perfect as a light change of pace.

Dreambuilders adroitly addresses the conflicts inherent in modern families with new parents and step-siblings adjusting to life together with charm. The family tale has a heart-felt message while dishing out imaginative fantasy scenarios and well-meaning laughs. 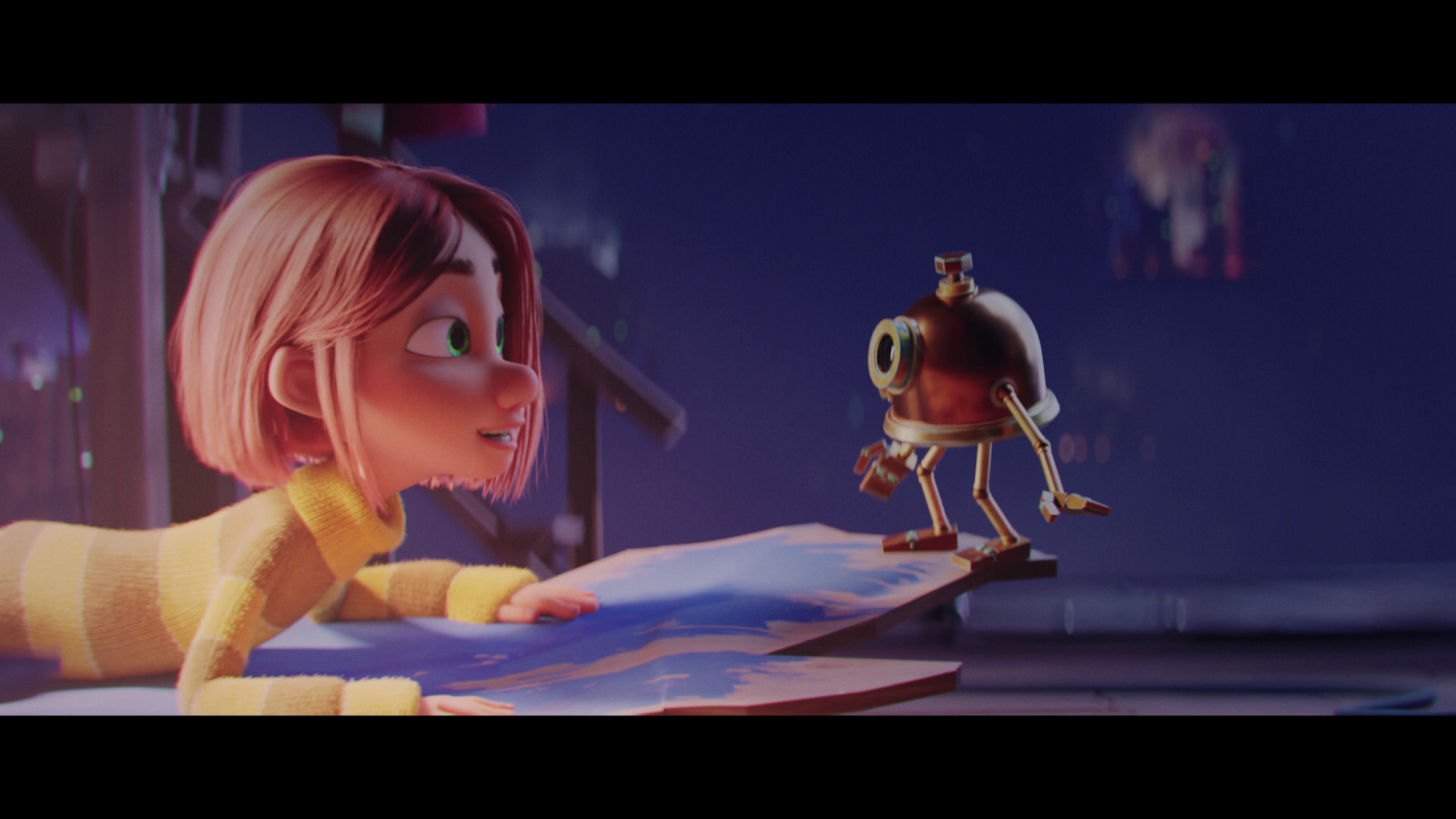 Dreambuilders runs eighty minutes, encoded in transparent AVC on a BD-25. The animated film is shown at its intended 2.35:1 aspect ratio. The 2020 Danish production is a brightly animated CGI flick made firmly in the mold of recent offerings from Pixar and DreamWorks. Its distinctly lesser budget than Hollywood’s accomplished animated titans makes up for technical shortcomings with pleasant character designs and a whimsical spirit.

The pristine 1080P video has a colorful palette with a few inconsistencies. Saturation is mildly erratic and doesn’t always pop with vivid clarity. This is middle-of-the-road animation made more for the home video market than blockbuster theatrical venues. That being said, Dreambuilders has attractive designs for its human cast and creatively inspired settings. There are nice touches all over the CGI that will catch your eye. The video won’t wow videophiles accustomed to Pixar blockbusters but the intended pre-teen audience should enjoy it.

French and English dubs in solid 5.1 DTS-HD MA options give the Danish production a professional edge with light immersion and decent sonic effects. The English dub isn’t vastly different from the original French soundtrack, though several main characters have had their names changed in the English dub for whatever reason. The adorable pet hamster changes names from Coco to Viggo as one example. For the movie’s intended pre-teen audience, the English dub is a perfectly good choice.

Minna’s dreams give the sound design room to breathe with a more spacious soundstage and bigger dynamics. The soaring musical score sounds fantastic and dialogue is always cleanly intelligible. Dreambuilders’ audio reflects its smaller budget than a movie from Pixar or DreamWorks. There’s less LFE rumble than expected and the surround design is fairly conservative for modern animation.

Optional English SDH and separate English subtitles for the original French soundtrack are offered in a white font, inside the scope presentation at all times.

Shout Factory serves as North American distributor for the animated European movie. They provide a Blu-ray and DVD combo for Dreambuilders. The BD is coded for Region A.

An imaginative peek inside the vividly animated dreams of a young girl struggling with a new step-sister, sweetly enjoyable for the European family film’s intended audience.