There’s an error, undeniably, in assuming what worked for 2001 so readily transfers to Star Trek. Yet, it’s not without grandiosity. Much as the ponderous first trip around the Enterprise stalls any sense of narrative, when Jerry Goldsmith’s sensational score increases tempo, what’s created is a monument to pop culture. And, to Star Trek’s credit, its famously unlocked racial and gender barriers make the Enterprise matter when compared to the raw commercial appeal of the Millennium Falcon.

Comparisons though are tired, something for the fan bases to dispute online among themselves. Star Trek is capable and positive-looking, space-faring storytelling, rejecting an inherently evil antagonist for a more thoughtful, eerie presence. The approach is atypical Hollywood as the Enterprise takes logical measures in dealing with a potentially planet-eating threat. No missiles or lasers – just thinking and rationality. What’s lost in traditional excitement is gained in character building.

It’s a smart script, putting Kirk (William Shatner) in the Captain’s chair, then immediately forcing him to cope with loss and technical errors. From there, all that he does forces him to reflect on those choices. The appearance of Spock (Leonard Nimoy) is less about audience cheers than a relief on Kirk’s face – a secondary brain on board induces a flood of confidence when dealing with the unknown.

Star Trek exists to extol an alternative future, not one where climate change devastated humanity or nuclear war scorched the surface, but where togetherness led to a sensible extension of the species. The movie’s twist is thus genuine, celebrating past Earth-bound achievements, and connecting them to unwritten history. Those who bemoan spending money on space exploration think only of the now; Star Trek simulated the eventual gains, and this specific story cleverly finds a parallel. While at times unsure and clumsy as to how best venture into the feature length world, the ideals and characters in Star Trek keep the franchise whole. 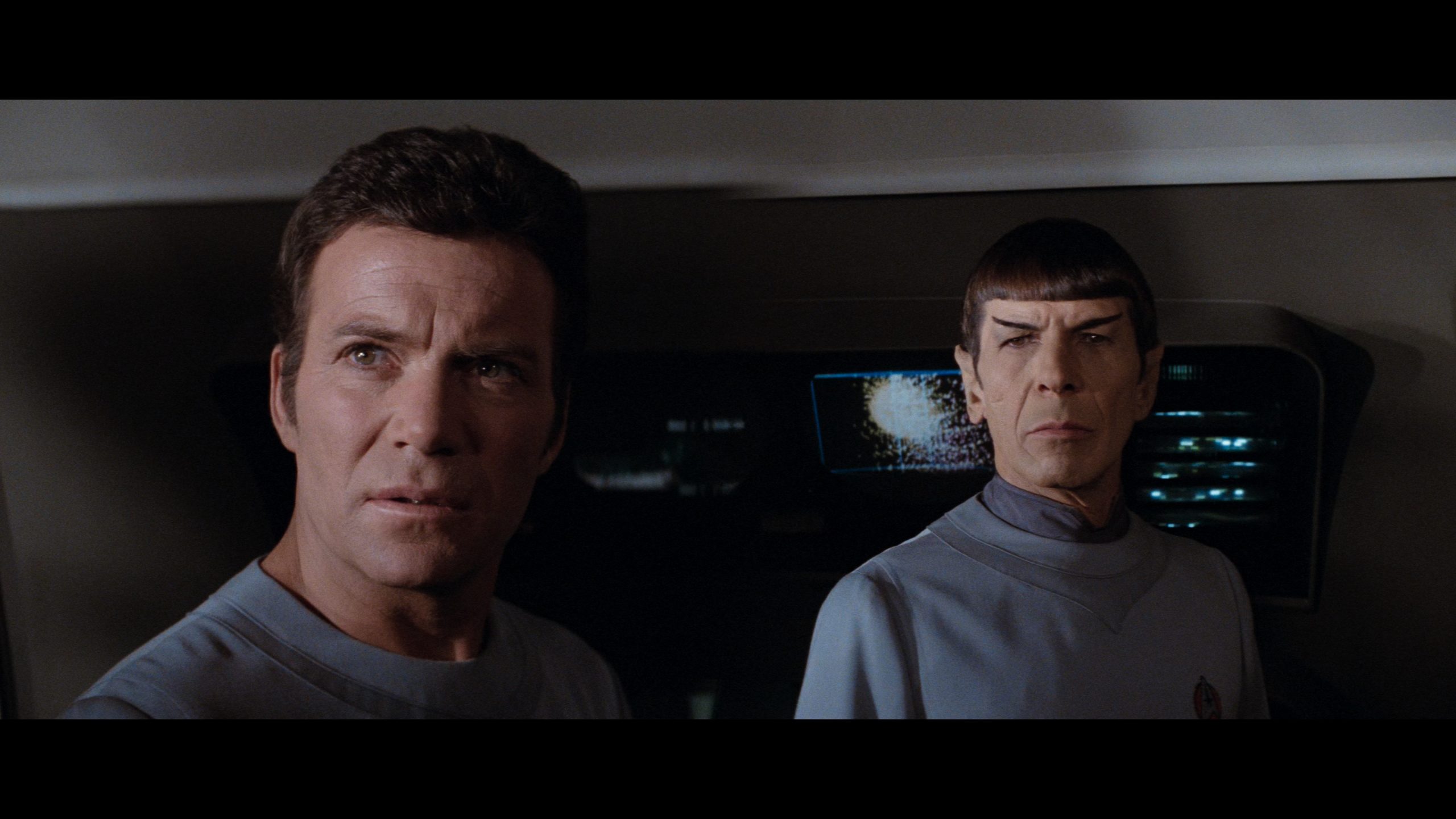 Space brings a pure, dominating black via Dolby Vision. Shadows elsewhere excel too, heavy, weighted, and pure. Various lights inside (and outside) the Enterprise add impressive highlights, and without appearing overbearing or unnatural. It’s easy to appreciate how contrast-y the cinematography and lighting are here.

Control panels and phaser blasts make use of the deep color. Beautiful flesh tones look superb, while primaries enhance their vividness. The blue cloud is a marvel when on screen. Steely Enterprise hallways produce a full metallic hue.

The full score is given a boost in TrueHD 7.1, potent and bold in highs and lows. Bass generates a solid rumble (if not matching more modern sci-fi/action understandably). However, this doesn’t sound aged either aside from the rougher-sounding dialog. Star Trek is mastered as well in audio as it is video.

The 4K disc includes a commentary from Michael & Denise Okuda, writers Judith & Garfield Reeves-Stevens, and Daren Dochterman. There’s also an isolated score track. Both are on the Blu-ray as well, along with the other bonuses.

A clumsy computer navigation menu is a pop-up feature that runs alongside the movie with added bonuses. A featurette on writing and the origins of the film lasts 10-minutes. A reunion roundtable runs near the same length. From an in-universe perspective, there’s a four-minute look at V’Ger. Eleven deleted scenes hit eight minutes. Storyboards and trailers bring on the finale.