Star Trek’s first film lavished praise on and swooned over what humanity built with Starfleet. It was a progressive, endearing “what if” that assumed civilization could one day build a centralized force for good. Star Trek II shreds those ideals.

Inevitably, Starfleet will make controversial decisions. People will separate from this galactic monolith for the usual pitfalls, whether politics or bureaucracy. Kirk (William Shatner) isn’t only dealing with the direct assault of a space-faring threat in this sequel, but an attempt to bury and suppress past mistakes.

There’s additional nuance too, as Kahn (Ricardo Montalban) sees himself as a religious deity, whose purpose is to eradicate Kirk. Where most universes war over weapons that destroy life, Star Trek II considers a technology which can create entire ecosystems; Kahn is its human-esque manifestation.

Often Star Trek populates its adventures with obvious villains, as in the visually evil, if not cultural. The Genesis project, which can bring life to dead planets, isn’t a cruel entity. Like Starfleet, the purpose is sound; its potential use is not. Science fiction often explored similar concepts, such as weather machines that can allow plant life to grow in deserts to end starvation. Those ideas lead to corruption, sometimes equivalent to nuclear bombs, even if the core idea promises to do right.

Star Trek II then surrounds itself with a looming moral catastrophe, one of logic and the greater good, centered on Kirk and Spock’s (Leonard Nimoy) bond. It’s not as if Star Trek II delivers on the sci-fi elements, rather than it so intelligently embeds them among the key characters. Kirk’s steady command and willing heroism is always in consideration of his crew – by the book. Spock’s choices rely on the same, minus the needs of his own self.

It’s a perfect antithesis to Kahn, who cares little for others, and will use a life-creating machine to simultaneously end others. Spock reprimands Saavik (Kirstie Alley) as she can’t comprehend the human ego. That line defines much of Star Trek II’s action as Kahn believes he’s superior, and Kirk never thinks of a plan that puts himself amid a deadly radiation leak. Only Spock can, because Vulcans don’t suffer from ego or see themselves as important to the wider universe. Star Trek II’s stellar tug-of-war on values and purpose is effectively flawless because as the Starfleet test suggests, there is no solution. 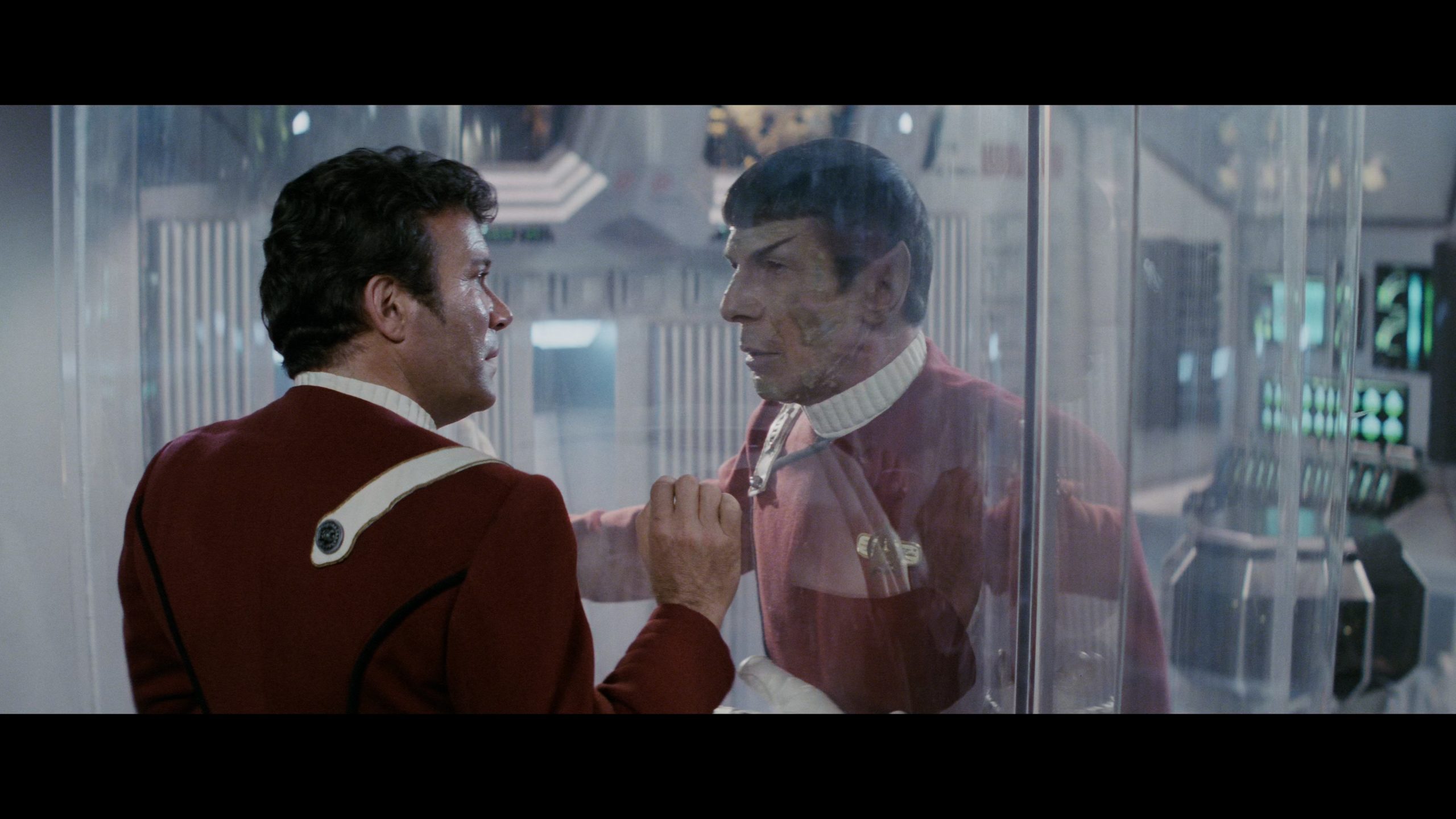 Those qualms aside, Star Trek II shows substantial gains from the Blu-ray. Fidelity boosts pick up texture on uniforms. Close-ups deliver fine detail. Encoding suffers a touch when trying to resolve haze or the sandstorm on an alien planet, but it’s otherwise capable in allowing definition through. The resolution boost can’t be denied.

While not the most intense in range, Star Trek II’s TrueHD 7.1 mix finds some bass worth celebrating. Explosions rumble a bit, as do ship engines. In that regard, the mix doesn’t sound like something from the 1980s. Only the dialog gives it away, since the score’s masterful treble doesn’t strain itself at all.

Extra rears drive heavy ambient winds around the soundstage. Ships pass by smoothly and naturally. Small touches like a crowd of trainees leaving a meeting and shuffling their feet into the stereos give the track small touches that bring it life.

Director Nicholas Meyer and Manny Cotto provide the commentary, on both the theatrical and director’s cuts. The Blu-ray and 4K offer the same tracks, while the Blu-ray carries the additional extras, beginning with a pop-up feature on the theatrical cut. A making-of lasts 28-minutes. A five-part menu includes interviews, effects featurettes, and a piece on James Horner’s score, among others. Bits on Star Trek II’s legacy, including one that details props, are excellent. Ricardo Montalban earns a deserving tribute that lasts nearly five minutes. Storyboards and a trailer finish things.

A powerful and morally complex sequel, Star Trek II is the epitome of the franchise as it delves into religious and life-affirming challenges.