Based off a French legend of a monstrous wolf terrorizing rural villagers, the sprawling epic is almost too much of a good thing. Part conspiracy thriller, action movie, and period drama, Gans’ ambitious tale is a glorified b-movie. Running 150 minutes in its director’s cut, Brotherhood of the Wolf entertains with intriguing characters but largely overstays its welcome. Judicious editing and a tighter screenplay could have made the French movie a real classic.

Hundreds have been killed by a mysterious beast hunting rural peasants in 18th century France. The Chevalier de Fronsac (Samuel Le Bihan) and his native American friend Mani (Mark Dacascos) are sent by the King to the Gévaudan province looking for answers. Having cut their teeth together in the wilds of North America, Fronsac and Mani make a formidable team.

The ambitious French movie somehow meshes high-flying Hong Kong martial arts (mostly by Mani) with gripping action and decent intrigue in a period setting. As Fronsac and Mani investigate the mystery, more and more questions are raised. Local officials are sure it’s a wolf. A sinister conspiracy soon emerges which adds depth and complexity to the chilling tale.

Brotherhood of the Wolf’s less accomplished drama concerns a love triangle with the dashing Fronsac and two women who fall for his charms. Fronsac falls in love with the local lord’s daughter, an aristocratic woman out of his league. The naturalist pursues her while sidetracked with an Italian prostitute.

Most of the excitement surrounding Brotherhood of the Wolf comes from its heady set pieces and slick action. The story is a little sloppy and eventually wears thin in a second half that takes forever. There’s enough material here for two movies – a perfectly good reveal halfway through the second act would have made a natural cliffhanger for a rousing first installment. 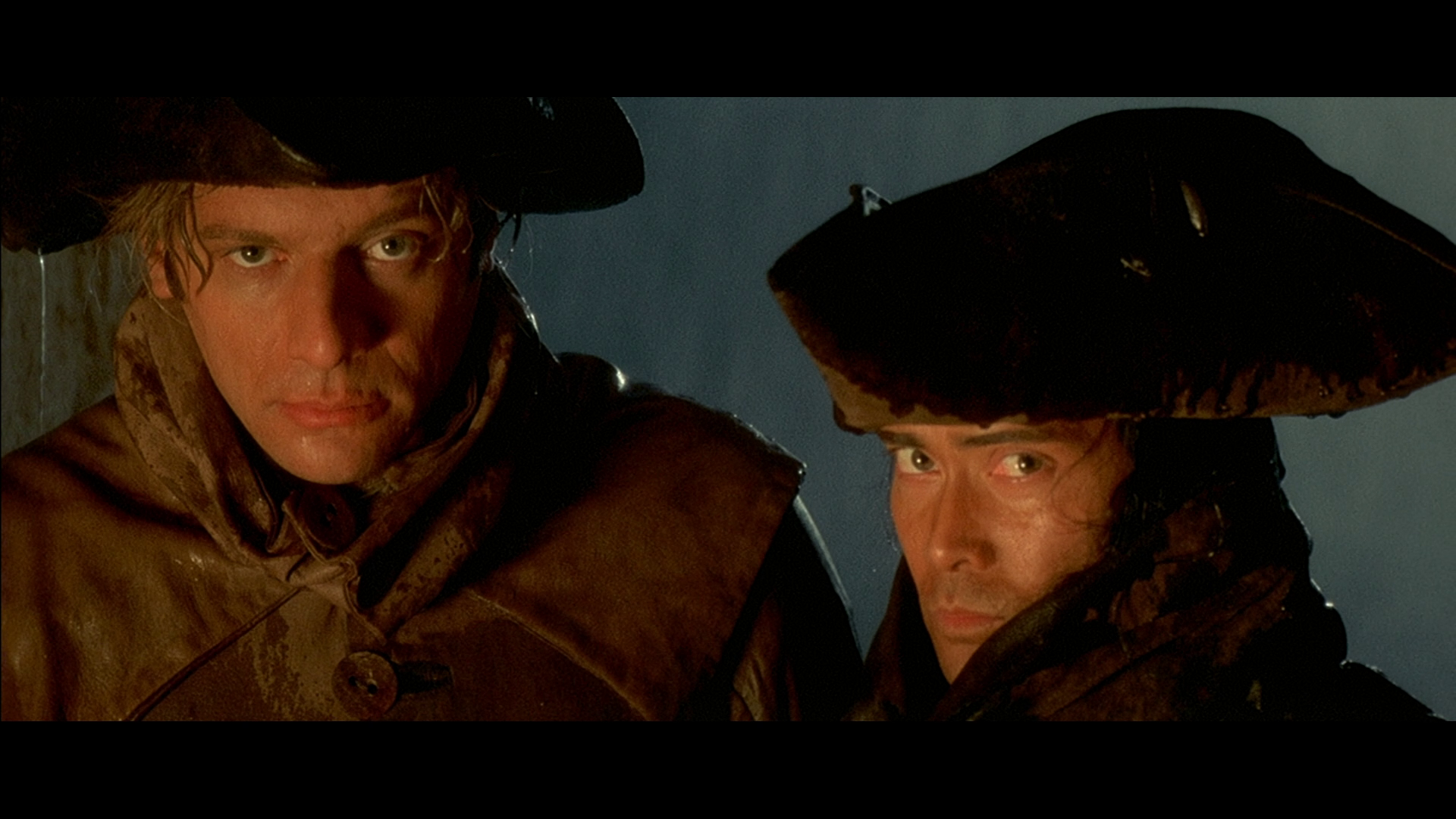 Scream Factory provides the unrated director’s cut, all 150 minutes of its bloated storytelling, on a BD-50. In a rare move for the label, all special features have been moved to the second Blu-ray in the set. That affords ample room for the satisfactory AVC encode with healthy parameters. The 2.35:1 presentation is fairly soft and needs a new color correction. Fans will have to make do with this serviceable effort until the film hits UHD in Europe. By no means is this a videophile-approved release.

The dated film transfer doesn’t hold up its end of the bargain. The movie is in dire need of 4K treatment. Licensed from StudioCanal, Brotherhood of the Wolf has suffered in high-definition with a litany of sub-par Blu-rays across the globe.

Unfortunately this new release makes no real difference as it’s widely believed to be sourced from the same basic HD transfer struck by StudioCanal. It’s an underwhelming scan with erratic video processing and inconsistent fine detail. Certainly better than the woeful DVDs with improved definition and shadow delineation, some crushing and ISO noise remain.

Brotherhood of the Wolf’s 1080P video has rough moments in the darkest scenes. Color saturation is weak, leaving a flat palette with a so-so contrast. Exteriors have decent depth and slightly enhanced clarity. The rural French setting has looked better in more polished Hollywood productions.

Both the original French language audio and a fine English dub are offered in outstanding 5.1 DTS-HD MA choices. Brotherhood of the Wolf has always had powerful audio with a well-mixed surround experience that explodes with pinpoint detail and separation. Produced in France by a French director, the native French soundtrack is preferred.

It’s not quite reference anymore with object-based soundtracks now available, but this is state-of-the-art mixing from the early 2000s. Thumping bass, clean highs, fantastically discrete split rears, and an always active sound design engages listeners. Hear the legendary beast roam the countryside as Fronsac and his Indian companion hunt it down in startling realism. The soundtrack immerses the audience in 18th Century France.

Optional English subtitles play in a white font, inside the 2.35:1 aspect ratio. The subtitles are a mess if you need them for the French language audio. Scream Factory has already announced a replacement program coming October 2021. A secondary 2.0 DTS-HD MA English soundtrack in stereo serves as a superfluous option.

When copies of Scream Factory’s Collector’s edition first began circulating, fans noticed the abysmal English subtitles. Maybe not so important for an American film, but very important for a French production originally produced with French dialogue. Due to backlash, Scream Factory has already begun a replacement program that hopes to see corrected English subtitles sent out by October of 2021.

The Collector’s edition is a two-disc Blu-ray set which places all special features on a second BD. Original pressings include a slipcover. The interior cover offers reversible artwork. The discs are coded for Region A.

This is one of the weaker and less complete collector’s editions from Scream Factory. Brotherhood of the Wolf has a long and complicated history on home video. Different distributors have the film in different territories, leading to a bewildering array of releases. For many years, the best DVD edition available in North America was the 3-disc Canadian release. The best and most complete Blu-ray edition hails from Germany, containing both cuts and more special features.

Scream Factory doesn’t include the shorter theatrical cut, which some will consider a mistake. Also missing are two commentaries widely released in Europe. Everything here has been seen before on prior editions, so there is no fresh content for hardcore fans.

The Guts Of The Beast (78:11 in SD) – A look at the creation of the film from the fight scenes to the digital effects. An extensive and nigh comprehensive documentary starring the cast and crew. The filmmakers are quite proud of their efforts detailing bringing the beast to life.

The Making Of Brotherhood of the Wolf (77:54 in SD) – A candid look behind the scenes as director Christophe Gans is followed during production.

The Legend (17:23 in SD) – An expert discusses the historical facts of the French legend behind the beast of Gévaudan and compares it to the movie’s more dramatic approach.

Deleted Scenes With Introduction By Director Christophe Gans (40:08 in SD) – Gans covers why some material didn’t make the final cut, dissecting each scene.

Brotherhood of the Wolf

The memorably unique French adventure smoothly marries the artistry of Hong Kong action flicks with the trappings of a period costume drama.