One thing no one can take away from Royal Deceit (aka Thrones and Empires) is its amazing cast. A young Christian Bale, a frisky Helen Mirren, and a brooding Gabriel Byrne all adeptly play off each other. The stars are backed by a supporting cast which includes Kate Beckinsale, Brian Cox, Tom Wilkinson, and Andy Serkis. Filmed in 1994, Bale and Beckinsale are virtual unknowns here before stardom came calling.

Director and co-writer Gabriel Axel’s film is an updated crack at the same Norse legend that inspired William Shakespeare’s Hamlet. Best known for Babette’s Feast, the filmmaker crafts an epic tragedy that doesn’t slavishly attempt remaking Shakespeare’s most famous play. However, the story beats are mostly familiar. Axel throws in a little salacious material for spice as Helen Mirren bares all for her starring role.

While raw and unrefined in Royal Deceit, hints of Bale’s future greatness litter the Shakespearean tragedy

Despite a stellar cast and excellent source material, Royal Deceit rarely rises above entertaining curiosity. The European film isn’t a lavish affair with cinematic production values. Most of the budget must have been sunk into the cast’s paychecks, resulting in basic sets for the historical Jutland setting. Expect cable telefilm standards for sets and costumes.

A young prince witnesses his treacherous uncle kill the prince’s father, King of Jutland. Lusting after the widowed Queen, the uncle marries the prince’s mother by deception and usurps the throne for himself. Biding his time, the prince hopes to avenge his father’s death and set things right for the kingdom.

Playing young prince Amled, Christian Bale is asked to help carry a movie in one of his earliest starring roles. While raw and unrefined in Royal Deceit, hints of Bale’s future greatness litter the Shakespearean tragedy. The charisma is clearly there, though his attempts mimicking madness are bad theater tropes. Helen Mirren as the Queen is nigh perfect in her role, adding tenderness and compassion to what could have been an easily forgettable character. No one chews scenery quite like Gabriel Byrne, delivering his villainous Fenge with a pompous bearing.

Kate Beckinsale doesn’t have a huge part. She’s mostly eye candy as Amled’s love interest. Filmed before the actress was widely known in Great Britain, much less Hollywood, there’s no indicator she’s destined for stardom. It’s a forgettable actress playing a throwaway role. No one would think twice about Beckinsale in Royal Deceit if the young actress had never been heard from again.

Royal Deceit is somewhat haphazardly executed and occasionally lacks urgency. Bearing that in mind, the tragedy has decent enough twists and turns for anyone who has somehow avoided reading or seeing Hamlet. A young Christian Bale demonstrates real promise, his burgeoning starpower already on display. Fans of the all-star cast should give Royal Deceit a chance. 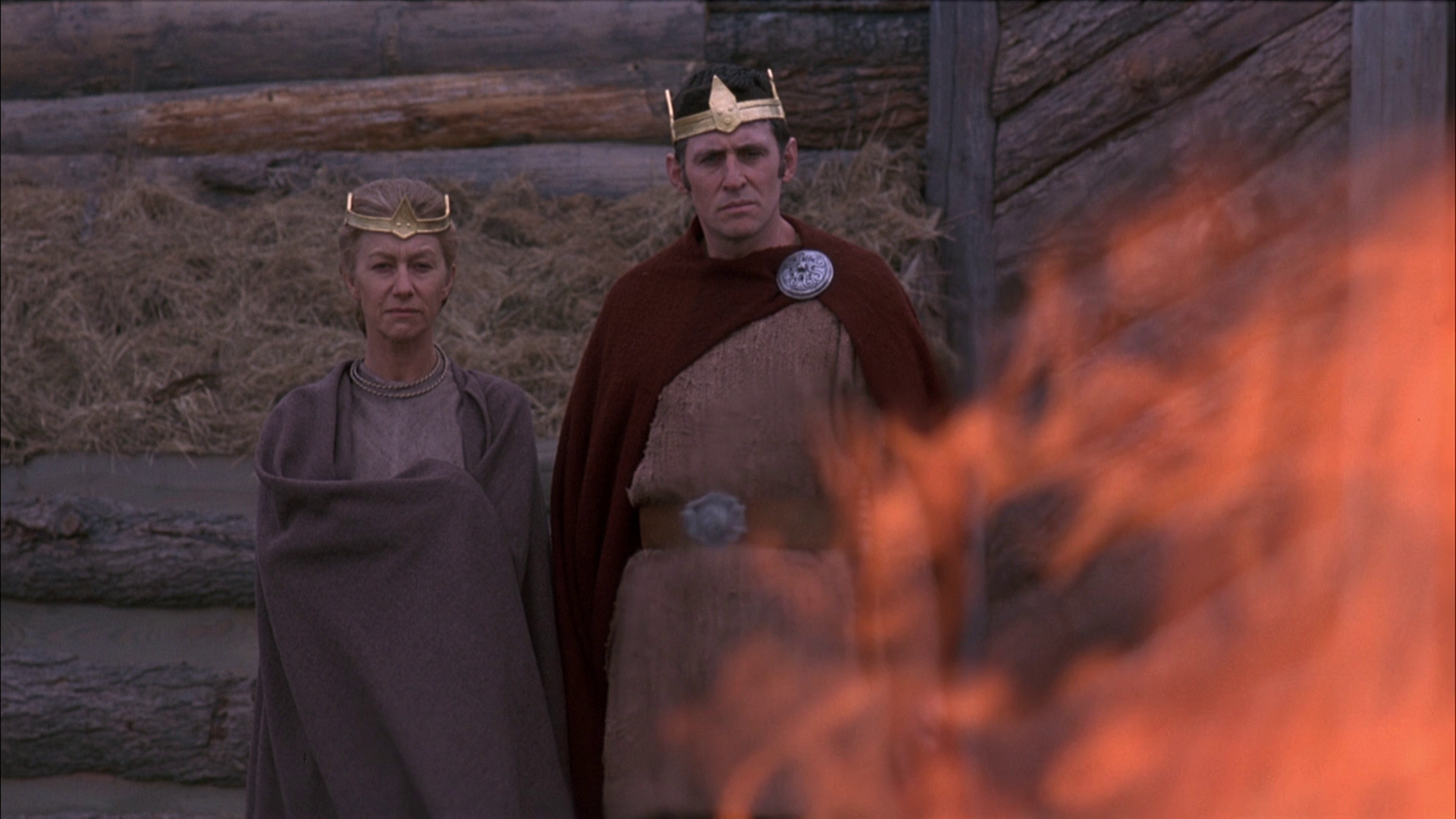 The best news for this MVD release is the inclusion of the fully uncut Royal Deceit from Europe in its original aspect ratio. Miramax imported the movie over to America when Beckinsale started becoming a Hollywood star. It was a botched edit job that hacked out over twenty minutes for American audiences and made no sense.

The full running time included here of nearly 108 minutes is given a satisfactory transfer from unrestored but healthy film elements. Likely a 2K scan of the negative from overseas labs. Most DVD versions of Royal Deceit were put out in butchered pan-n-scan transfers. MVD presents the movie at 1.78:1, close to its intended 1.85:1 theatrical presentation.

The AVC encode holds up fairly well, afforded generous parameters on a BD-25. Exteriors actually pop with clarity and decent definition for a cheap European production from the 1990s. The film-like video is occasionally soft and lifeless, mostly in the darker interiors. Passable shadow delineation reveal limitations in the original cinematography. Some softness is evident but it’s largely organic, a faithful reproduction of the negative with intact grain and unfiltered fine detail. Minor speckling is apparent on the consistently warm film elements.

Released as part of MVD’s Marquee Collection, the Blu-ray is coded for all regions. Region-free BD users should be aware that a German distributor put out Royal Deceit on Blu-ray, releasing it under the name of Amled. MVD includes unrelated trailers for Adam Resurrected, Camino, and the Savage Dog/Close Range double-feature.

A young Christian Bale and Kate Beckinsale appear with an all-star cast in this eccentric adaptation of Hamlet which occasionally entertains but isn’t entirely effective.