If Paddington is king of the CG-animal-in-live-action genre (and Paddington unarguably is), then Peter Rabbit and this sequel come close to an even tie.

The difference between the two is entirely heart. Where Paddington is sweet, Peter Rabbit 2 is PG-raunchy. Paddington won’t burp, Peter will. Peter Rabbit 2 exists in a zone of self-acknowledgment though, bordering on parody of this entire sub-genre, toying around with the cliches. It’s joyful, and underneath, a softened fairy tale about growing up, understanding responsibility, while coming-of-age in the process.

Returning as Bea, Rose Byrne signs a book deal with a corporate publisher who effectively takes the role of home studio Sony in adapting the original work. Bea’s story is quaint. Publisher David Oyelowo wants skateboards, beaches, and spacesuits to market the material easier to sell. Peter Rabbit 2 resists for a time, then come the finale, Bea is skiing down mountains, chasing boats, and crossing the continent to recover animals – everything Oyelowo held dear and Bea resisted. None of this happens organically. Rather, it’s forced, and narration acknowledges as much.

In that, Peter Rabbit 2 takes pot shots at other franchises like The Smurfs or Alvin and the Chipmunks, those at time hopeless, crass movie adaptations… also from Sony.

To avoid becoming those movies, Peter Rabbit 2 finds some heart, earnestly treating Peter as conflicted about his place among the family. He escapes into the city, routinely forced to choose what he sees as freedom away from discipline or stay with those who berate but love him. It’s the perfect avenue to explore childhood confusion, to distill rules and structure as necessary down through a cartoon rabbit. After the typical breakup around the hour mark, Peter Mr. McGregor (Domhnall Gleeson) share a moment where the topic is clearly discussed and laid out as to avoid misinterpretation by even the youngest kids.

Before that point, the energy is stable, consistent, and safe – not overwhelming yet never dull. Humor finds a serene middle ground between manic and charming, making Peter Rabbit 2 simple casual viewing across age groups. Again, like Paddington, Peter Rabbit 2 is relaxing to watch, a perfect means to end a long day. 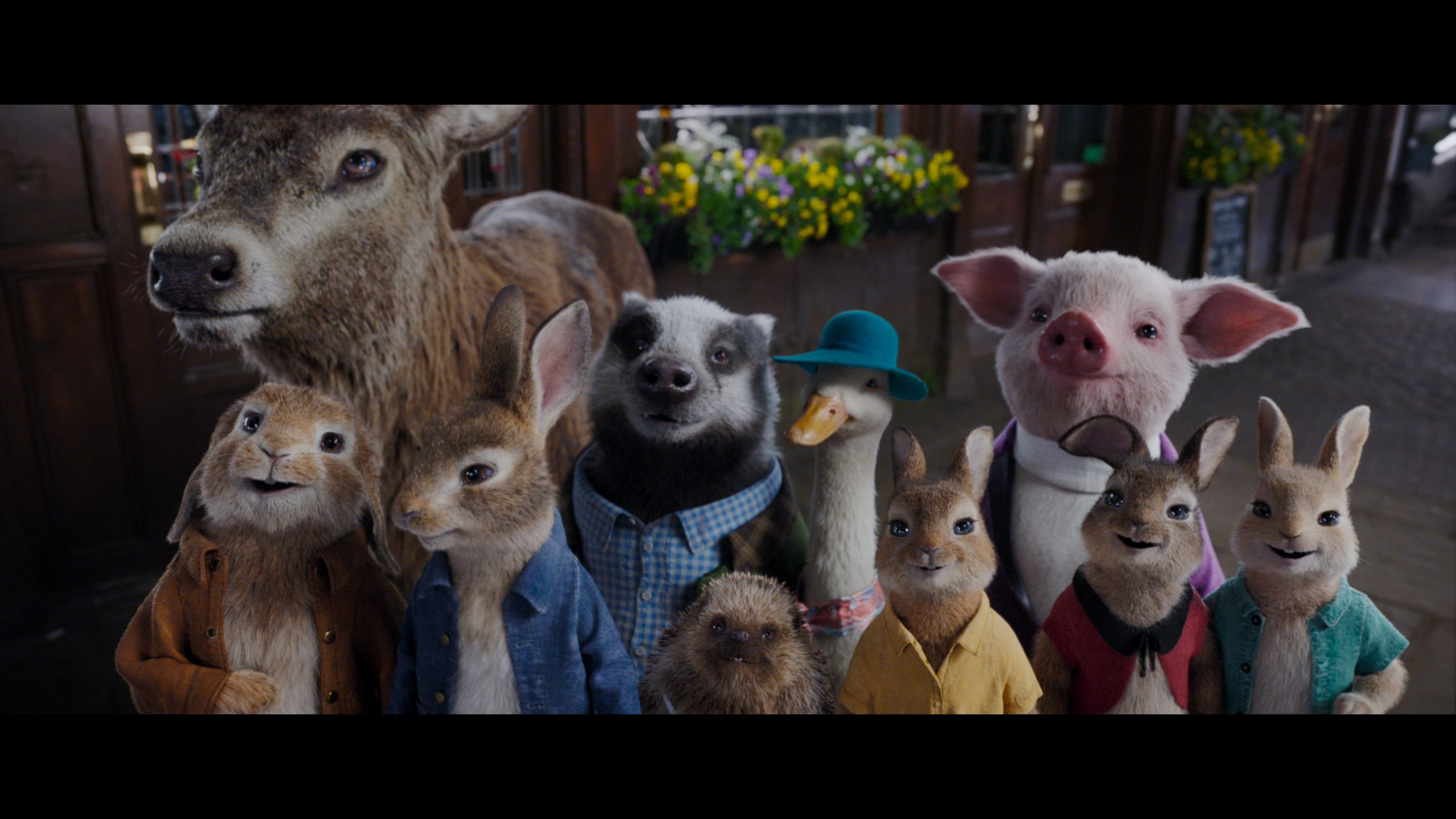 From a 2K source, the upscale draws out enough detail to justify the 4K release. Peter Rabbit 2 isn’t impressively sharp or anything, but does resolve CG rabbit fur easily. Facial texture in close is slightly above average. Medium shots lose that definition, smudgier in appearance, and identifiable as digital given the clarity. There’s no noise to notice.

Splendid color varies from flat grays and browns in the village to more intense primaries in the environment. A beautiful, delicate deep color introduces variety galore. Softer hues on the rabbit clothes back up against gorgeous greenery and fresh food like tomatoes. Where the detail lacks compared to the best UHDs, the color use makes up the difference.

Atmos it is, keeping a firm soundstage present at all times. Music rushes through to the rears, and is persistent about it. Balance touches during chase/action scenes shares the love, tracking motion with precision. Jumping rabbits bounce through the heights in spots. It’s nothing too showy, but enough to notice their use.

Everything stays on the Blu-ray. That begins with a nine-minute EPK making-of, all fluff (no pun intended). There’s a mini-movie, and crafting/cooking tutorials for the kids afterward.

The self-awareness of Peter Rabbit 2 borders on parody, but it’s light family viewing that’s just behind Paddington for the CG character genre championship.