A new evil, the giant planet Unicron, is brewing over both Autobots and Decepticons in the classic Transformers: The Movie. Autobots’ leader Optimus Prime (Peter Cullen) battles Megatron (Frank Welker) and the sinister Decepticons. The only hope saving their home planet of Cybertron is the Autobot Matrix of Leadership.

The animated 1986 film took everything children loved about the Transformers and made them larger than life with real stakes involved. The life-and-death clash between the Autobots and Decepticons reaches epic heights in a slick action-adventure filled with old friends, new characters and surprising changes to the status quo. More mature and sophisticated than the weekly cartoon television series it was based on, Transformers: The Movie became a cultural touchstone for children growing up in the ’80s.

Transformers: The Movie became a cultural touchstone for children growing up in the ’80s

Millions of young kids cried out in terror when the heroic Optimus Prime dies in battle against his arch-enemy Megatron, shocking the popular cartoon’s many fans. Transformers: The Movie made tough choices about the show’s most beloved characters, evolving the series beyond its early television roots as an excuse to sell Hasbro’s popular toy line.

Starring the voices of Judd Nelson, Leonard Nimoy, Robert Stack and Orson Welles in his final film role as a world-destroying mega-villain, Hasbro and the producers greatly underestimated the appeal of Peter Cullen’s Optimus Prime. The popular Autobot’s death wouldn’t last long as he was very quickly brought back to life in the television run. 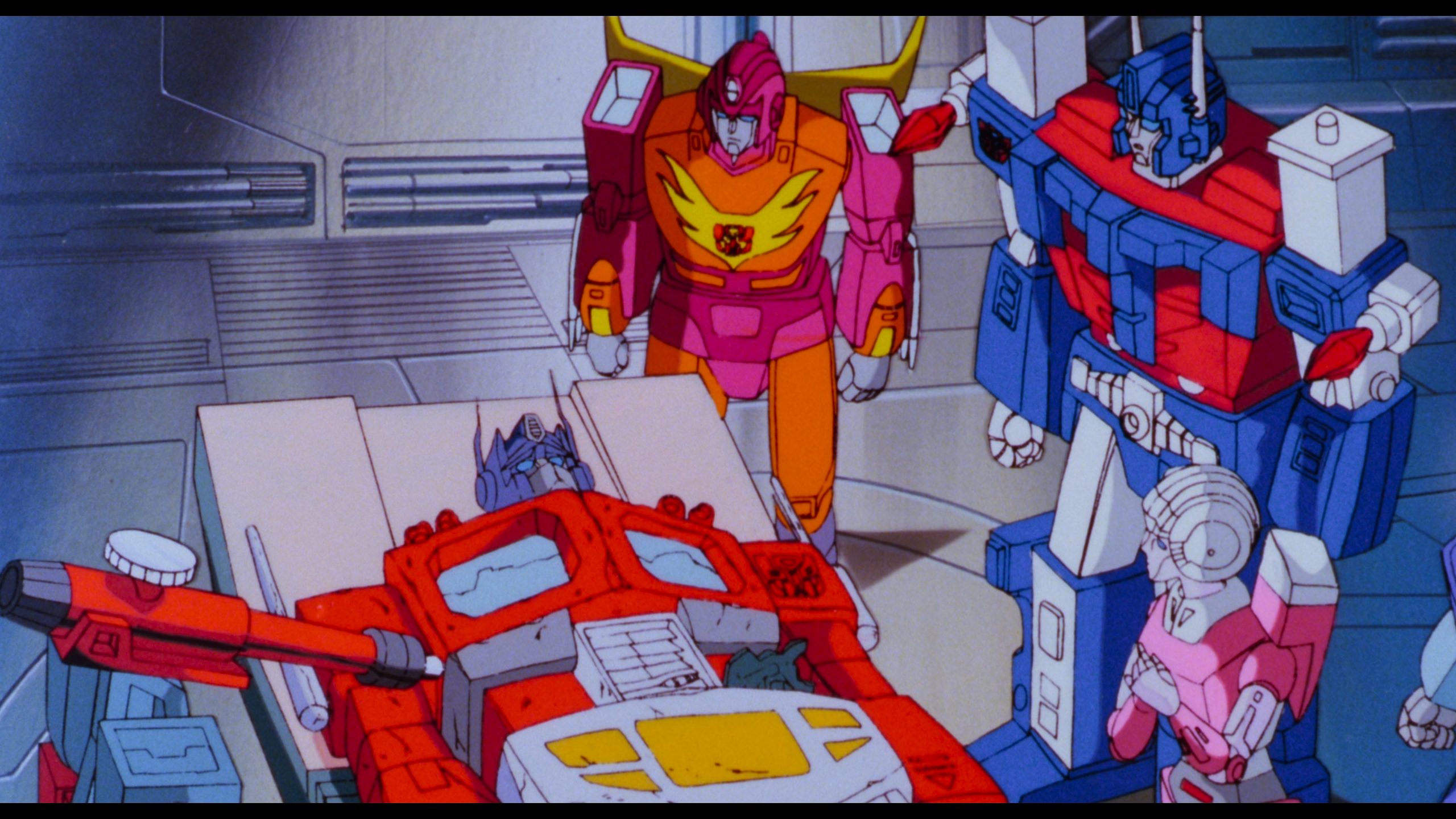 The distributor shows remarkable and tasteful restraint, honoring the film’s purest intentions without an overdone color correction. The palette often dazzles with brilliant color depth and reveals the surprisingly intricate animation designs. This is light years removed from how the original Transformers cartoon looked during its television run. Everything is bigger and better, often with more nuanced details.

The classic cel animation holds up quite well at 2160P resolution; an argument could be made this is one of the healthiest animated film transfers from the entire 1980s. Only a handful of classic animated films have hit 4K UHD. It’s amazing this cult classic is properly getting such royal and lavish treatment in 2021.

There may be a little room left for visual improvement if you compare the palette seen on the open-matte version, the 1.85:1-framed transfer preserves the original integrity of the theatrical composition to a high degree. We are seeing vintage cel animation brimming with vital color reproduction, faithfully reproduced in decent HDR and Dolby Vision encoded with a Full Enhancement Layer (FEL), mastered at 1000 nits. The dynamic metadata isn’t outrageously exaggerated like some other UHDs. You’ll notice the enhanced color fidelity but it’s not quite as eye-catching as newer productions.

The one complaint with this 35th Anniversary is that Shout Factory decided against releasing the 1.33:1 open-matte version in 4K, found on the included Blu-ray in regular 1080p resolution. Animation enthusiasts love examining the entire frame originally seen by animators. In this case, the raw color correction found on the included BD is brighter and more vivid. I’d bet that Shout Factory ends up releasing the open-matte version in 4K for a hypothetical 40th Anniversary edition down the line. Many fans were clamoring for it with this edition.

The HEVC compression averages 74 Mbps on a double-layer UHD, perfectly capturing the film elements’ detail and texture. The 85-minute main feature really pops with nice colors and fantastic clarity. There are a very few remnants of leftover debris particles, reminding us this is hand-drawn cel animation made before the advent of digital scanning. The transfer is completely unprocessed; we are getting a high-quality image harvest without filtering or halos.

The same outstanding 5.1 DTS-HD MA audio from the 30th Anniversary Blu-ray pulls you into the space battles and action. Boisterous surround design and superb fidelity highlight the engaging mix, which lights up with lasers and explosions. The constant battles engage across the soundfield with deep rumble and authentic atmosphere.

A completely immersive audio experience, the film’s hilariously cheesy pop tunes from the ’80s sound like they were recorded yesterday in sparkling clarity. It’s a powerful sonic presentation with crisp dialogue and excellent dynamics.

Shout Factory leans heavily on content from their earlier 30th Anniversary Blu-ray edition for this new and improved 35th Anniversary edition, sprucing things up with a few new bonuses. Most important special features from that successful release are brought back, while adding feature-length storyboards, deleted material and a 2016 featurette with musician Stan Bush performing acoustic versions of “The Touch” and “Dare” from the movie. A couple older archival featurettes round out the offerings. While the UHD is region-free, the Blu-ray is coded for Region A.

First released as an impressive, limited edition 4K UHD Steelbook, this attractive set should be at the top of any collector’s buy list despite a few limitations. The Steelbook’s artwork is awesome and looks great up close with bold colors. Inside the package are a series of art cards enclosed in a black envelope.

Pre-orders on Shout Factory’s website initially included an 18” by 24” limited edition lithograph, now sold out. A regular 4K UHD edition is being issued in coming weeks.

The two-disc set comes with the movie’s theatrical widescreen version on UHD, while the fully open-matte transfer is included on the enclosed Blu-ray. Aside from the group commentary, all special features are relegated to BD. Methinks Shout Factory did it that way so consumers wouldn’t split up the set for resale.

Shout Factory doesn’t collect every special feature ever made for Transformers: The Movie. Various DVD editions from other distributors have contained exclusive featurettes, including a fan commentary on the Sony BMG DVD missing here. Probably the biggest absence is the loss of a slightly different, alternate cut made for the UK market.

Audio Commentary with Director Nelson Shin, Story Consultant Flint Dille and Voice Actress Susan Blu – This was a commentary originally recorded for the 2006 Special Edition DVD. Nelson Shin and Flint Dille fill in many details about the production behind the scenes, while the voice of female Autobot Arcee recalls working on the project. There are some gaps in the discussion and not everyone seems to be on the same page in this occasionally disjointed commentary. Listenable for hardcore fans but this chat is not quite as cool as it sounds.

‘Til All Are One: Looking Back at TRANSFORMERS: THE MOVIE (46:32 in HD) – A comprehensive, well-made 2016 documentary on the animated film with many cast and crew members, including story consultant Flint Dille, cast members Gregg Berger, Neil Ross, Dan Gilvezan, musician Stan Bush, composer Vince Dicola and more. Animation, music, fan reception and other topics are handled with care.

Fathom Events 30th Anniversary Featurette (09:46 in HD) – Stan Bush performs acoustic renditions of his two songs while also discussing his musical contribution to the movie in this new featurette from 2016.

The Death of Optimus Prime Featurette (05:02 in SD)

Feature-Length Storyboards (79:45 in HD; 2.0 Dolby Digital) – Animation geeks will eat up this full-length presentation of the movie through its original storyboards, playing out like a movie with the original audio helping out.

Deleted Scenes (11:32 in HD) – Existing as storyboards, they are inserted into the finished animation.

Full disclosure: This 4K UHD Steelbook was provided to us for review. This has not affected the editorial process. For information on how we handle review material, please visit our about us page to learn more.

Optimus Prime memorably sacrifices his life battling Megatron in this epic animated adventure from the 1980s.