A messy production history saw The Dark turn from a horror movie about a burned autistic boy rampaging through town, into a zombie story, and then an alien saga. Director Tobe Hooper got the boot a few days in, and the changes kept coming.

What results is basically a dud, ponderous and uneventful, following a detective procedural, an author’s urge to find the killer, and a reporter. The kills are few, the thrills fewer, and the tension barren.

However, The Dark does show additional effort. While general b-movie slop in the ‘70s (Octaman – eww) rarely delved into complex issues, The Dark’s script finds a number of scenes – dull as they sometimes are – revealing cultural changes during the period.

Star Richard Jaeckel faces an inner city group who, despite the dated slang, convey a distrust toward police. They banter, hurl insults, but with careful word choices, Jaeckel calms the situation. Still an uneasy truce, but assertive and without violence.

Cathy Lee Crosby plays a journalist determined to break from her boss’ demands she use her looks to cover bikini pageants. Baked-in sexism gives her character a purpose, way beyond the usual damsel. By the finale, not only does she resist her producer, she’s in the action rather than running from it. Additionally, there’s brief exploration as to how the press covers these happenings, and whether their headlines cause a panic or inform. It’s deeper-than-expected dialog.

Nonsense about psychics doesn’t lend an already ridiculous story credibility, but The Dark does create a seedy, uncomfortable environment. The city looks rundown, the alleyways covered in shadow, and the feeling of safety totally eliminated. That simulated danger ends when the alien being, with makeup akin to the walking undead, begins shooting lasers from his eyes. If it looks hasty, that’s because it was. Alien’s success caught the production company’s attention, and script changes followed.

The Dark took shots from the Mystery Science Theater crew. In terms of its “sci-fi,” that’s more than deserving. Completely thrashing The Dark misses finer qualities, even if they fail to connect wholly with the rest. A curiosity, mostly because movies of this type show so little care. 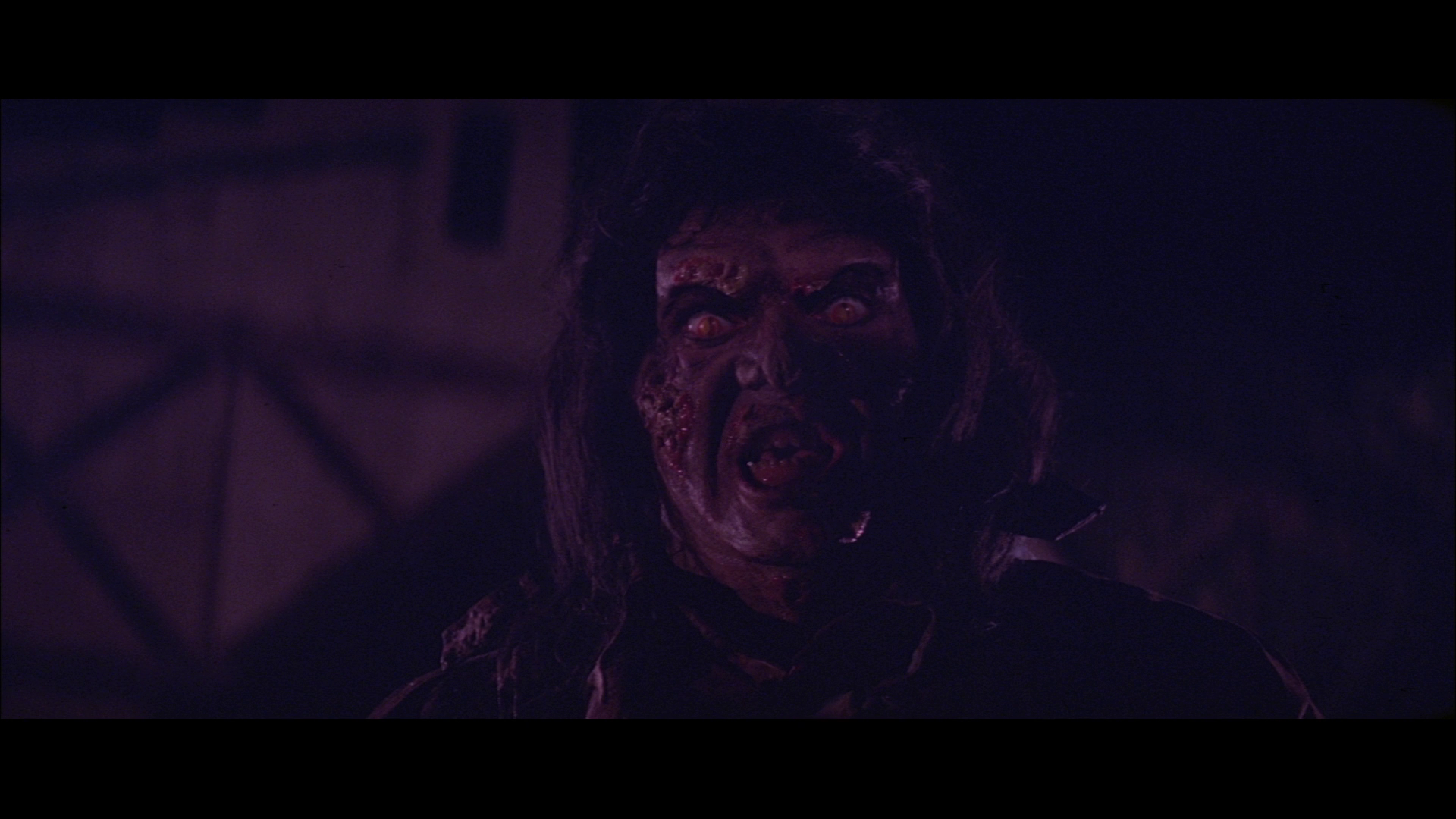 MVD gives this cheapie a beautiful master. Minor specks and dirt aside, the print is near perfect. It’s stable, and consistent grain, under command of the encode, maintains strong fidelity. The Dark’s sharpness is enough to believe it’s a newer production than the late ’70s. While not overflowing with things like facial detail, texture fills the frame, resolved by an impressive, high-resolution source.

Color lacks the same impressiveness, flattened out and dry. Primaries lack zest, and it’s not only the darker cinematography keeping them suppressed. The city doesn’t come to life as expected, rudimentary even among the streetside lights.

The latter is fine, while black levels struggle. For a movie often set in shadow, density lacks in every frame. Mostly, they exist as washed out browns, maybe deep gray. Credit to the encode though as no noise fills those lighter areas. Contrast is likewise only fair, but better comparatively.

Budget constraints reveal themselves in the dialog, which through a PCM stereo track, sounds especially strained. Upper registers collapse, and deliver “nails on chalkboard” effects. It’s all audible, but rough.

The music fares better, impressive even, although no low-end supports the the effort. The overall effect then is flat, minimal, but clean.

While mostly an uneventful, low budget horror yarn, there’s enough attention to The Dark’s script to give it a unique timestamp.