Hanna-Barbera Action Mayhem From The 1960s

The Herculoids is another fondly remembered Saturday morning cartoon from animation powerhouse Hanna-Barbera during their heyday. Premiering on CBS in 1967, eighteen broadcast episodes saw Zandor and his family fight alongside an eclectic group of creatures on an alien planet, defending it from an array of invaders and enemies like the Mutoids and Sta-Lak.

Zandor’s allies include Zok the dragon who shoots laser beams from his eyes, a strange rhino-like animal named Tundro who shoots energy blasts from his horn, shapeshifting creatures Gloop and Gleep, and giant monkey creature Igoo with a rocky exterior. Communicating with grunts and noises, the menagerie of strange monsters help battle Zandor’s foes and often have to save his family from certain doom.

The Herculoids is an unusual and often bizarre mix of dinosaur-like creatures, exotic aliens, and futuristic technology

Each episode is split up into two separate adventures, evenly splitting the twenty minutes. Always offering simple tales of good versus evil with no underlying message, The Herculoids has a heavy emphasis on action and conflict. Zandor, stoically voiced by Mike Road, is the clear-cut protagonist. The barbarian-like character stops his evil opponents with the mighty abilities of his strange friends. Zandor’s adventures always include his wife Tara (Virginia Gregg) and young son Dorno. Tara and Dorno often end up as hostages to the aliens constantly looking to take over the planet. There’s little depth to the human characters.

The Herculoids is an unusual and often bizarre mix of dinosaur-like creatures, exotic aliens, and futuristic technology despite a far-flung planetary setting that feels stuck in a primitive past. It’s a chaotic blend of disparate influences, primed for the mostly mindless and simple action plots. But it’s undeniably fun for young boys who like action and imaginatively designed creatures in battle.

The show gained new fans as Hanna-Barbera began repackaging it for syndication in the late 1970s with other classic H-B cartoons. Which led to a small revival on NBC in 1981, when a few new episodes were produced for Hanna-Barbera’s anthology Space Stars. 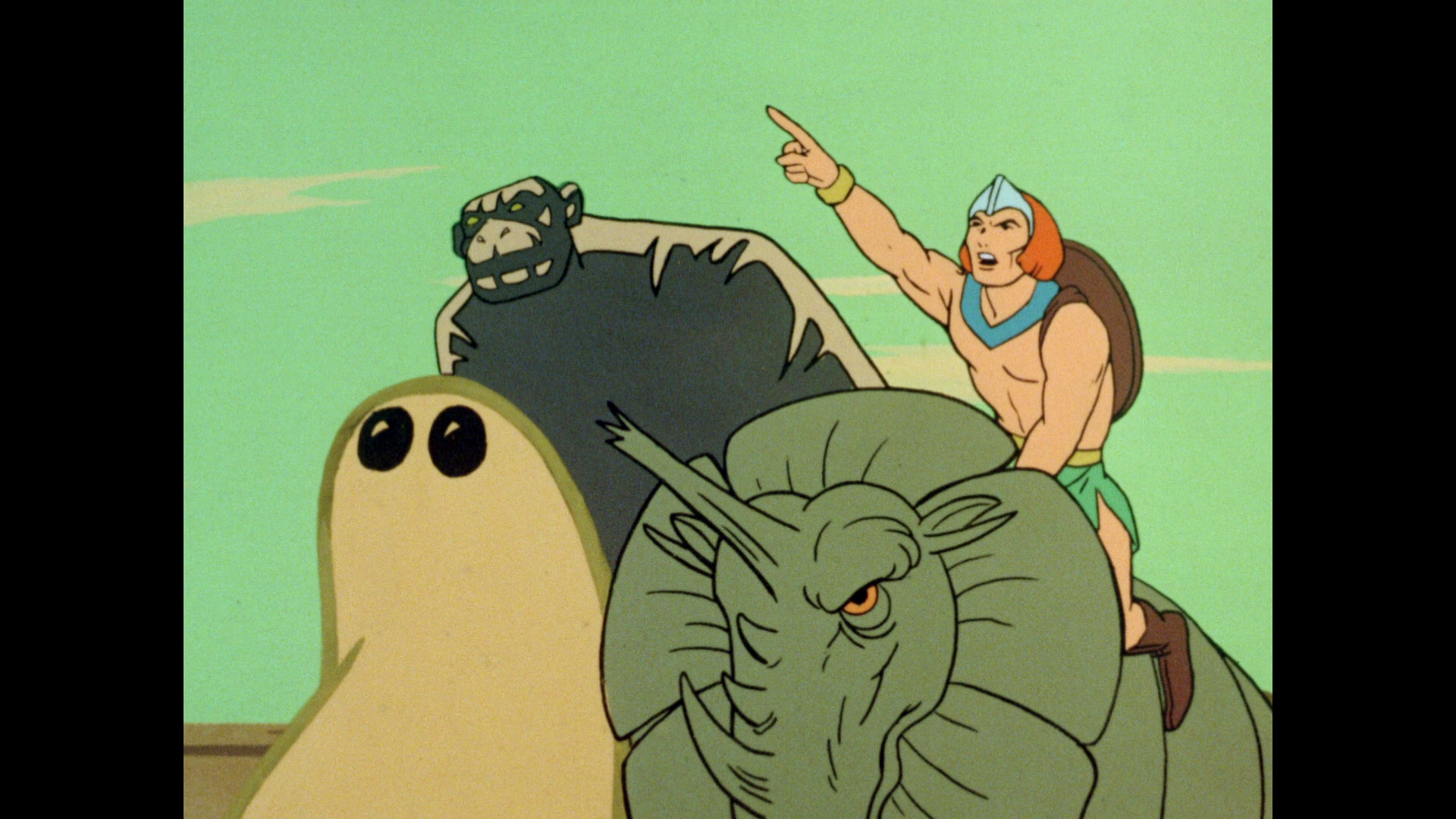 All eighteen episodes of the show’s original 1967-1969 broadcast run are spread over three discs, two BD-50s and a BD-25. Seven episodes are allotted per BD-50, while the BD-25 gets the final four. Warner Archive treats their Blu-ray releases far better than sibling Warner Home Video and the primitive action cartoon receives a stellar and authentic 1080P presentation. This is a top-notch package of seemingly impeccable A/V quality for a cheap Hanna-Barbera production.

The original elements are in awesome condition with few rough spots, possibly the best-looking Hanna-Barbera cartoon from the 1960s released on BD in terms of faithful color reproduction and accuracy. A strong AVC encode transparently and flawlessly renders every detail of the simple ink and paint animation used for each cel. They’ve held back on filtering the film transfer, the right call for such untouched and pristine elements.

The animation itself is fairly typical Saturday morning cel animation from the 1960s by Hanna-Barbera. Cheap and mostly effective, color saturation is a little uneven with crisp black levels. The Alex Toth designs are fairly wild and adventurous, a confluence of Ray Harryhausen-inspired monsters and Toth’s familiar style for humans like Zandor.

Presented in the cartoon’s native 1.33:1 aspect ratio replicating the original television broadcasts on CBS, The Herculoids has never looked better. The Blu-ray transfer vastly improves on detail, color rendition, and visible definition over DVD. If you’ve caught other Warner Archive releases for Hanna-Barbera’s classic cartoons, this is more of the same fine work.

Fidelity is decent for the 1960s recording, which shows up when the score becomes more energized with Zok’s laser beams or Tundro’s energy blasts. Dialogue has a slightly boxy quality but source hiss is minimal. Sound effects are definitely serviceable, if a little thin on the bottom end.

Warner Archive has been excavating the Hanna-Barbera library for Blu-ray – shows like Josie and the Pussycats, Space Ghost and Dino Boy, Thundarr the Barbarian and others have all recently made it out in quality editions.

The three-disc set retains the single featurette found on the DVD release. The only thing missing from this nice release are the eleven new episodes Hanna-Barbera made for their 1981 anthology series Space Stars.

The Herculoids: First Family Of Planet Quasar (04:35 in SD) – A 2009 featurette on the cartoon with noted animation mavens like Jerry Beck, Paul Dini, and Mark Evanier. The Alex Toth designs and clear Ray Harryhausen influences are points raised about the Hanna-Barbera show.

The fondly remembered Hanna-Barbera cartoon from the late ’60s is an echo of Saturday mornings past when action fare for young boys consisted of alien planets and wild monsters.