Remember in Rocky IV when Ivan Drago so earnestly states, “If he dies, he dies?” Take that sentiment, but for each character in Great White.

Blake Lively starred in the best of these trapped-with-a-shark movies, The Shallows; Open Water comes a close second. Great White regurgitates those movies, in some cases beat-for-beat, sticking people in the ocean, alone, isolated, with fins circling around them.

Great White has the standard 20-minutes to reach that point, a chance to develop these people into something interesting. In that, it fails, and with, so too does the rest of the movie. Led by Katrina Bowden whose sole trait is a newly announced pregnancy, Great White gives Aaron Jakubenko a thankless hero male role. Tim Kano plays a derivative, whiny heel, his wife Kimi Tsukakoshi generally irrelevant aside from screams.

People matter, and that’s especially true in Great White because much of the runtime is spent with them debating survival options. There is an attempt to elevate things – Tsukakoshi visits this island to dump her grandfather’s ashes, the Bowden/Jakubenko couple worry about their finances, and a single line blames climate change for the unexpected behavior. Yet, none of this matters. The ashes are soon forgotten, financial woes don’t factor in, and movie sharks act like movie sharks. All of it is wasted time.

For its finale, Great White closely mirrors a similar scenario from the recent Deep Blue Sea 3, pinning a main character within inches of the shark’s maw, backed against rusty surroundings. For its efforts, Great White doesn’t gain anything in excitement or thrills; by that point, it’s exhausted all the usual jump scares and weak digital effects.

The movie industry splurges on sharks, most skipping theaters because studios know better. It takes something substantial to justify a new killer fish flick. Great White lacks that, and therefore, can’t get out of its own water fast enough. Reminder: It’s always possible to watch Jaws. Again. 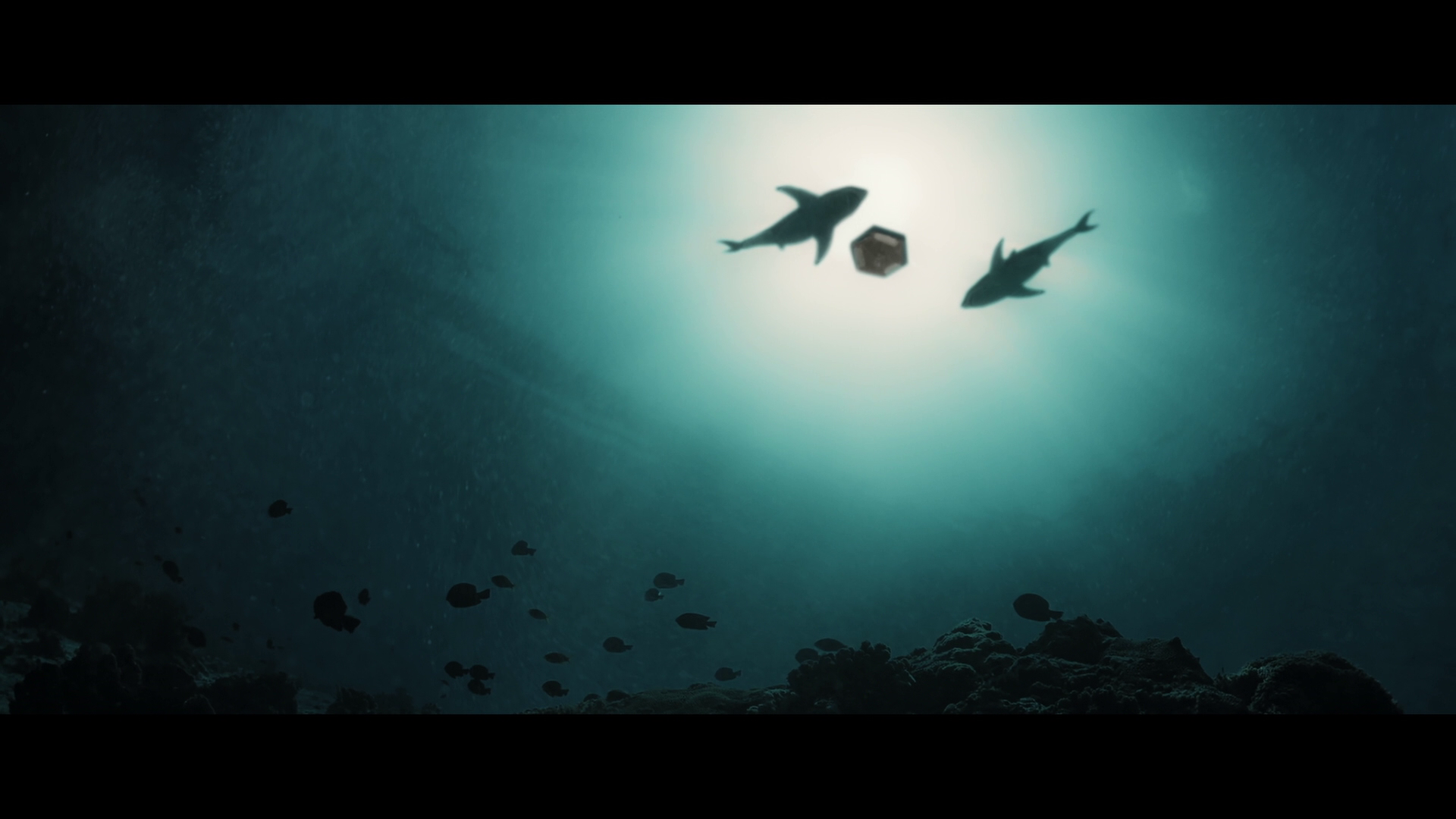 Given a notably digital glaze, Great White offers clarity, if not the fidelity. There’s detail, but it’s lacking, hidden by sloppy, glossy haze. Decent in close, but the gorgeous location scenery rapidly fades, unattractive and smeary at the best. The encode looks fine, so this is all on the source. Same with occasional rounds of noise.

Color takes on an appropriate warmth, pushing flesh tones toward amber tints, but only marginally affecting the rest. Blue-ish green waters explode in various hues, and various tree life lining the beaches hit maximum boldness. Although clearly on the side of modern digital grading and unnatural, it’s still gorgeous.

Come nightfall, blues and teals take over, bringing with them some atrocious banding and weaker color definition. That sinks this transfer.

With sunlight soaking the scenery, there’s no lack of contrast to go around. It’s beefy. Black levels fail to keep the same consistency, but provide enough shadow density to get by. A few times, they’ll draw in noise.

Less impressive is the positional work, barely utilizing the rears for anything. The plane passes the camera, but only through the fronts, failing to make any transition to the rears. Even with the opportunity to spread watery ambiance around, hardly anything noticeable splashes about. Bummer.

Great White doesn’t let an audience care for the people OR the sharks, and that’s a fatal flaw.